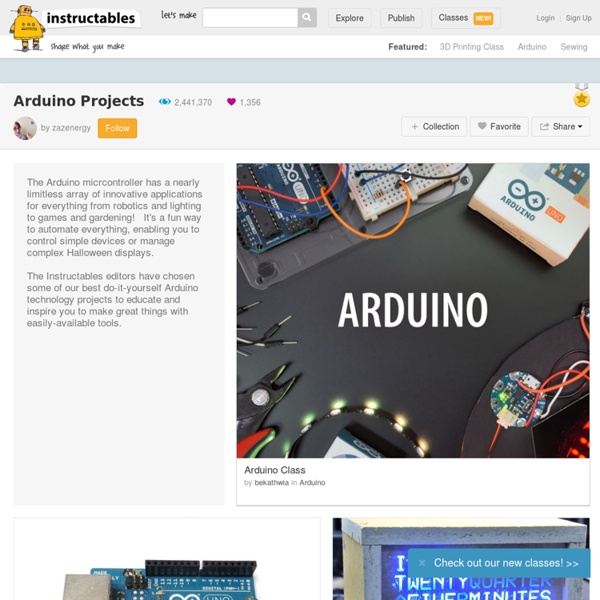 To make all of these Instructables, download this collection of How To’s as an ebook. Download » The Arduino micrcontroller has a nearly limitless array of innovative applications for everything from robotics and lighting to games and gardening! It's a fun way to automate everything, enabling you to control simple devices or manage complex Halloween displays. The Instructables editors have chosen some of our best do-it-yourself Arduino technology projects to educate and inspire you to make great things with easily-available tools.

Jaycar Electronics - Arduino Projects Tools, Components & Cable Power & Energy Ecotech Power and Lighting Python et GPS Tracking Python and GPS Tracking Skill Level: Advanced by a1ronzo | December 17, 2012 | 17 comments Introduction In my quest to design a radio tracking system for my next HAB, I found it very easy to create applications on my computer and interact with embedded hardware over a serial port using the Python programming language. My goal was to have my HAB transmit GPS data (as well as other sensor data) over RF, to a base station, and graphically display position and altitude on a map.

The Absolute Beginner's Guide to Arduino Over the Christmas break from work I wanted to learn something new. I’ve been eyeing up Arduino for some time now, and for Christmas I got an Arduino UNO R3 board. What is Arduino? Arduino is an open-source electronics prototyping platform based on flexible, easy-to-use hardware and software. It's intended for artists, designers, hobbyists, and anyone interested in creating interactive objects or environments.

Category: Arduino My older son recently started school and needed his own desk for doing homework. I wanted to make something nicer than a simple tabletop with legs, and realized that I could also build in a bit of fun for when the homework is finished. Both my boys and I still had space travel on our minds from our summer trip to Kennedy Space Center. For this desk project, I decided to go with a NASA theme. I researched the Apollo Program as well as NASA's Mission Control Center, and designed my own console roughly based on those. I say "roughly" because the actual Mission Control does more monitoring than controlling, and isn't awash in the whiz-bang rocket noises young kids appreciate.

Arduino Motion Detector As I have been traveling through Getting Started with Arduino I’ve been trying to take on the “tinkering” mentality described in chapter two titled, “The Arduino Way“. And as the text in the book states, “You should now experiment by looking at all the possible devices that have two contacts that close.” So I made a purposeful visit to Radio Shack to look for parts to hook up to it. Tutoriel Python et GPS Tracking - Nouvelles by a1ronzo | December 27, 2012 | 12:12 am | 16 comments Share Use this URL to share: Share on Twitter Share on Facebook Share on Google+ If you have ever programmed a microcontroller, you are probably familiar with sending and receiving data over a serial port. A common way to do this is with a serial terminal program (hyperterminal, Arduino serial monitor, etc.). Lets say you want to create your own serial terminal program that displays data from a microcontroller in a meaningful way.

Alternative Arduino Interfaces Overviewing the Options Arduino is awesome! It’s our go-to electronics education platform, and it’s our top choice for rapid prototyping, but it isn’t for everyone. Maybe it’s the cryptic language, or the Java-based IDE, or maybe it’s just the teal window border – regardless of your reasoning, if you’re trying to escape the Arduino IDE, here are a few alternatives we’d like to share. VHDL Tutorial Jan Van der Spiegel University of Pennsylvania Department of Electrical and Systems Engineering VHDL Tutorial 1 1. Sockets de serrage sur le câble ruban It's a good idea to use sockets and header pins when working with ribbon cable. They make your projects more modular, portable, and able to be assembled and disassembled rapidly. You can get 16 stranded ribbon cable, sockets, and male header pins at Jameco: 16 conductor ribbon cable Jameco 28RC16-10VP 16 pin right angle connector Jameco 746285-3 male header pins Jameco 103393

Installing an Arduino Library What's a Library? Arduino libraries take a complex task and boil it down to simple to use functions. Arduino users have written lots of exciting add-ons for Arduino. Adafruit FONA A battery and antenna is required! If you have a uFL FONA, a uFL->SMA cable may be required to connect the antenna. Use any Lipoly or LiIon 3.7V/4.2V battery Check polarity for the battery!Snap the uFL connector on, it will click when placed properly