Xoscillo - A software oscilloscope that acquires data using an arduino or a parallax (more platforms to come). 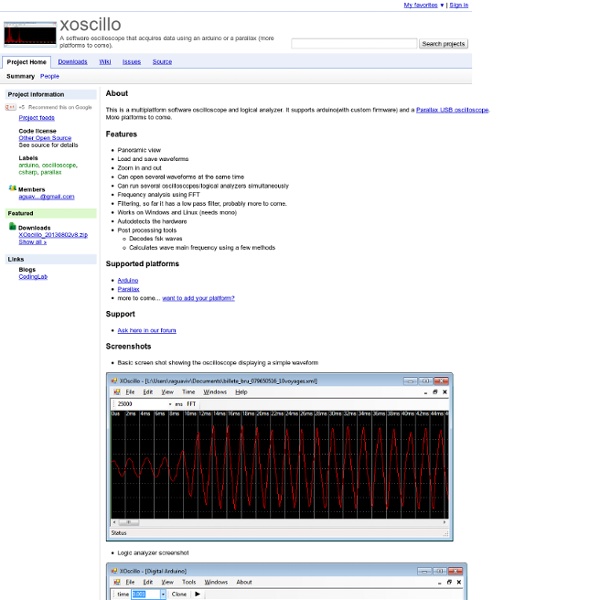 About This is a multiplatform software oscilloscope and logical analyzer. It supports arduino(with custom firmware) and a Parallax USB oscilloscope. More platforms to come. Features Panoramic view Load and save waveforms Zoom in and out Can open several waveforms at the same time Can run several oscilloscopes/logical analyzers simultaneously Frequency analysis using FFT Filtering, so far it has a low pass filter, probably more to come. Supported platforms Support Ask here in our forum Screenshots Basic screen shot showing the oscilloscope displaying a simple waveform Logic analyzer screenshot Displays the FFT of the signal and underneath the FFT over time. This screen shot shows an arduino based oscilloscope and a parallax one working simultaneously in realtime. Linux Notes from the Author The code is not by any means great, its just a quick exercise I did to learn c#. License

HMC5883L Compass Tutorial with Arduino Library - Tutorials - Love Electronics Using a magnetometer can be a little tricky, especially if your unsure about the formulas to use to get the correct bearing and when other magnetic objects are interfering with your signal. We've created a library for our HMC5883L Breakout Board , which will also be compatible with other HMC5883L breakout boards made by other manufacturers. Join us whilst we cover the following: Understand what is a magnetometer and how they work. How do compasses work? Firstly an introduction, a (standard handheld) compass works by aligning itself to the earths magnetic field. Our magnetometer uses these magnetic fields, however it doesn't pull on a little needle inside it! How do we use one? Okay, so now we know how to use one, the first step is to get some data out of our compass. Now of course to talk to the HMC5883L we will need some code, helpfully we've written an arduino library for the HMC5883L which makes this really easy. Using the HMC5883L Arduino Library Wire.begin(); Calculate your bearing

Improving the Beginner’s PID – Introduction « Project Blog In conjunction with the release of the new Arduino PID Library I’ve decided to release this series of posts. The last library, while solid, didn’t really come with any code explanation. This time around the plan is to explain in great detail why the code is the way it is. I’m hoping this will be of use to two groups of people: People directly interested in what’s going on inside the Arduino PID library will get a detailed explanation. It’s going to be a tough slog, but I think I found a not-too-painful way to explain my code. The Beginner’s PID Here’s the PID equation as everyone first learns it: This leads pretty much everyone to write the following PID controller: Compute() is called either regularly or irregularly, and it works pretty well. Sample Time – The PID algorithm functions best if it is evaluated at a regular interval. Once we’ve addressed all these issues, we’ll have a solid PID algorithm. UPDATE: In all the code examples I’m using doubles. Tags: Arduino, Beginner's PID, PID

We interrupt this program to bring you an Arduino interrupt tutorial Ah yes… the wonderful and oft-misunderstood world of microcontroller interrupts. Are you looking to build a project that relies on very precise timing or needs to react quickly to an input? Then don’t change that channel, my friend. In this tutorial we’ll cover what interrupts are, what they do, and how to use them. What is an interrupt? On a very basic level, an interrupt is an signal that interrupts the current processor activity. ISR? If you’re new to the world of software development, you might wonder why all this complication is necessary just to respond to external events. You certainly can do all of these things in your main code, but interrupts give you a key advantage – they are asynchronous. Let’s use a real-world example. Instead, imagine if the package was sent Fedex or UPS with delivery confirmation. The AVR chips used in most Arduinos are not capable of parallel processing, i.e. they can’t do multiple things at once. Types of Interrupts Implementing an interrupt in a program

Welcome GamePack Were you ever the kind of person to hack up your own Playstation controllers and hook it up to something else? Well, those shards of plastic can be mighty dangerous, so I’ve done it for you. And hey, with the GamePack you’ll even have something you can hook it up to. The GamePack comes with an Arduino, MeCap Backpack, TouchShield Stealth or Slide, ExtenderShield and an InputShield- everything you need to create your own open source, portable gaming device. Want to create a whole new gaming platform? Why not? I’ve just added a new option for wide screen that includes the new TouchShield Slide. Components Specifications TouchShield Slide: 320×240 LCD Screen Resistive Touch Screen Holds 60 128×128 bitmap images Compatible with Arduino Environment Only Uses Arduino Pins: 3 and 4 Graphics Library Ready to Go Draw Shapes, Pixels, Colors, Graphs, Buttons 2.83 inch diagonal Tutorials/Blogs Reference and Firmware Media Another shot of the Open Source Gameboy Project

Arduino - HomePage Towards a sensor commons | Technology Treason The Internet of Things, a term being bandied to the point of almost meaninglessness now it’s hit the mainstream of the NYT and the BBC. Yet, while the mainstay of the media struggles to describe how and why smart sensor arrays are going to mean you spend less time in traffic, ultimately pay more for your electricity but make sure your fruit is always fresh, there is a quiet revolution taking place. The action taking place is the creation of what I call the Sensor Commons. Two posts summarise this activity and its implications beautifully for me. The first, by Ed Bordern from Pachube, is on the creation of a community driven Air Quality Sensor Network. The implications of this quiet revolution are discussed by Jauvan Moradi in his post on how open sensor networks will affect journalism. I gave a talk at Web Directions in October this year on the Web of Things. What is the Sensor Commons? In my definition of the Sensor Commons geography doesn’t matter. Gaining trust Become dispersible Price

Power Protection Circuits [419] | General Electronics | Electronics Written by Jon Chandler Published on 18 December 2011 Hits: 16366 Multithumb found errors on this page: There was a problem loading image ' There was a problem loading image ' Non-Lexical Vocables PhotoThe real world can be a harsh environment for your project when it's ready to leave the work bench. This is a typical circuit power supply connection. the power supply could be a battery, a vehicle power supply or an AC adapter. With a circuit of the first type, there is no protection against reverse polarity, over voltage or under voltage. With a circuit of the second type with a voltage regulator, there is usually no protection against reverse polarity although some regulators do provide this feature. The addition of a simple power diode provides protection against reverse polarity. This method also uses a power diode, this time in parallel with the power supply.

Design note: "Charlieplexing" LED matrices: Pin savings of Charlieplexing, easy assembly of multiplexed LED modules. ( dropbox mirror ) Charlieplexing ( named after Charlie Allen ) is a great way to save pins on a microcontroller. Since each pin can be either high, low, or off ( 'high impedence' ), and LEDs conduct in only one direction, one can place two LEDs for for each unique pair of microcontroller pins. This also works with other devices, like buttons, but you can only place one for each pair of pins since they conduct in both directions*. However, a recent foray into designing with Charlieplexing revealed its major drawback to me: soldering a zillion discrete LEDs is very time consuming and not for everyone. It is easier to use LED modules, which have LEDs already wired up, and are designed to be driven by multiplexing. Thinking about charlieplexed grids One might ask: how the hell am I supposed to keep track of all the possible combinations used in Charlieplexing? Placing modules I can now place components on this grid to fill it up. Another common size for LED matrices is 5x7. Now it gets fun.