A Multi-Protocol Infrared Remote Library for the Arduino 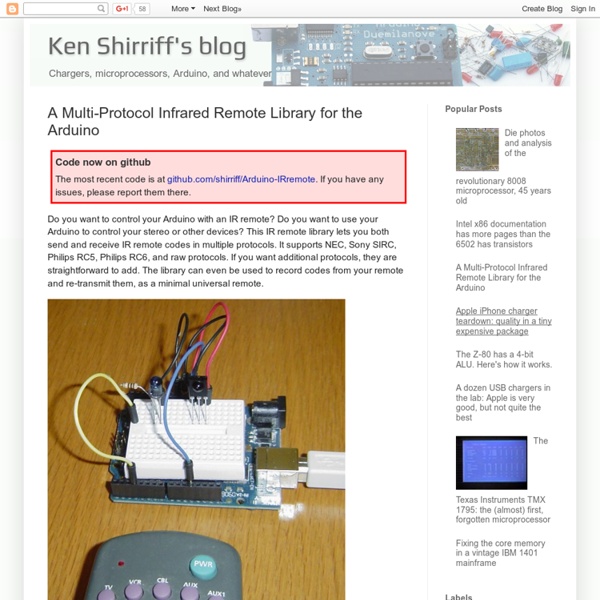 Do you want to control your Arduino with an IR remote? Do you want to use your Arduino to control your stereo or other devices? This IR remote library lets you both send and receive IR remote codes in multiple protocols. It supports NEC, Sony SIRC, Philips RC5, Philips RC6, and raw protocols. If you want additional protocols, they are straightforward to add. The library can even be used to record codes from your remote and re-transmit them, as a minimal universal remote. To use the library, download from github and follow the installation instructions in the readme. How to send This infrared remote library consists of two parts: IRsend transmits IR remote packets, while IRrecv receives and decodes an IR message. #include <IRremote.h> IRsend irsend; void setup() { Serial.begin(9600); } void loop() { if (Serial.read() ! This sketch sends a Sony TV power on/off code whenever a character is sent to the serial port, allowing the Arduino to turn the TV on or off. How to receive Hardware setup

playground - ShiftBriteLib Overview Taken from macetech.com. ShiftBrite is a high-brightness LED module containing red, green, and blue elements. It uses a simple clocked serial interface to receive a 10-bit brightness value for each color, resulting in over a billion possible colors. Project – NPN Power Transistor A transistor is a semiconductor device commonly used to amplify or switch electronic signals. In this project, a power transistor is used as a digital switch. When pin 9 (digital output) is HIGH, the LEDs will turn on, and when LOW the LEDs will turn off. Using a power transistor with an Arduino pinout will allow you, for example, to control outputs with a higher current or voltage source than Arduino pins support. Use an NPN Power Transistor, one 1k resistor, and 220 Ohm resistors for the LEDs.

25+ Alternative & Open Source Database Engines Almost every web developer has a favorite database that he/she feels comfortable working with as all the tricks & gimmicks are already experienced. It can be one of the popular databases below: or even simpler ones like XML, text, etc. It is understandable why these databases are frequently used; they are well-documented, have a community behind them, integrated with most popular CMSs', easy-to-use, offered by most of the hosting companies ,etc.. ESPEasy - ESP8266 The ESP Easy firmware can be used to turn the ESP module into an easy multifunction sensor device for Home Automation solutions like Domoticz. Configuration of the ESP Easy is entirely web based, so once you've got the firmware loaded, you don't need any other tool besides a common web browser. The ESP Easy firmware is currently at build R78 an looks stable enough for production purposes as long as it's being used as a sensor device. ESP Easy also offers limited "low level" actuator functions but due to system instability, this could be less useful in real life applications. Getting started with the ESP Easy takes a few basic steps.

Online : LED cluster for Arduino testing My friend Usman and I are collaborating long-distance on an Arduino project. He’s a software guy (by which I mean he’s a guy actually made of software. OK, not really, but almost) and doesn’t have time right now to get up to speed on hardware. So, I send him bits of hardware as needed. Infrared controlled timelapse photography with Canon DSLRs-Mozilla Firefox I wished all digital cameras would allow timelapse shooting out of the box. Digital cameras with a selftimer are able to trigger a photo via it's software but for some odd marketing reasons timelapse is seldom added. And even if your camera has a timelapse option it is often limited to 999 shots. You can find lots of remote cable based external timelapse solutions for Canon cameras on the web but I haven't yet seen one that works infrared based. This solution is based on a previous post.

Cheap Arduino Wireless Communications I was looking for a way to handle wireless communications between two Arduino boards. Other options like Xbee or Bluetooth were going to cost $50 to over $100. Then I found a cheap RF transmitter and receiver at Sparkfun. The total cost is only $9! Here are a few limitations to RF solution: Communications is only one way. PiDome The PiDome Home Automation/Domotica project tries to create a transparent home automation platform targeting the Raspberry Pi. It provides a flexible API to add support for custom hardware/services in java. A graphical xml editor is build-in to create devices based on supported protocols. MySensors is supported by PiDome through the SerialGateway or MQTTGateway.. Homepage Install Instructions