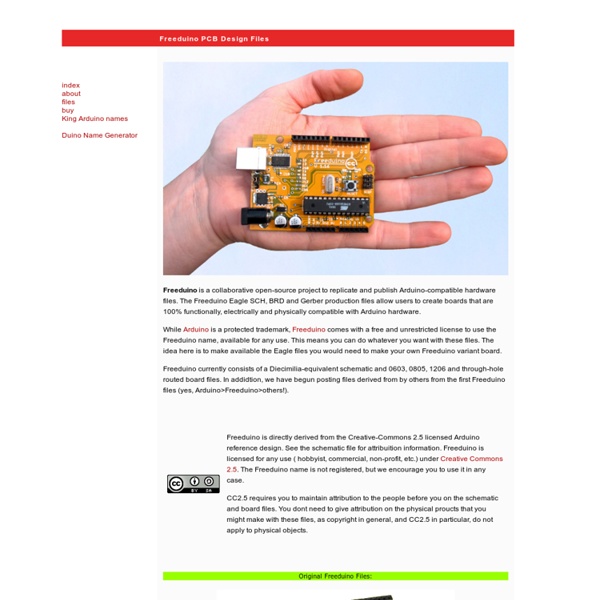 Freeduino is a collaborative open-source project to replicate and publish Arduino-compatible hardware files. The Freeduino Eagle SCH, BRD and Gerber production files allow users to create boards that are 100% functionally, electrically and physically compatible with Arduino hardware. While Arduino is a protected trademark, Freeduino comes with a free and unrestricted license to use the Freeduino name, available for any use. This means you can do whatever you want with these files. The idea here is to make available the Eagle files you would need to make your own Freeduino variant board. Freeduino currently consists of a Diecimilia-equivalent schematic and 0603, 0805, 1206 and through-hole routed board files. Original Freeduino Files: Freeduino 0603 SMT prototype. Freeduino Serial (by NKC Electronics) Files: Freeduino MaxSerial Files: Freeduino SB (by HVW Tech/Solarbotics) Files: Note: Freeduino is not asociated with the official Arduino project. Related:  Arduino...Etc

Buy Freeduino Open Source Hardware Freeduino.org releases files and provides a name... other people do the rest. Some people have made new products with the Freeduino PCB files, while others have adopted the Freeduino name in true open-source spirit! We list each of them here with a link to its appropriate maker/vendor, in no particular order. Didd you make a Freeduino board with the name "Freeduino" printed on it? Freeduino USB: the original! NKC Electronics has a Diecimila-compatible USB Freeduino that is available as a kit, with the USB chip pre-soldered. Freeduino SB 2.2 Wow! choose between a type "A" or type "B" USB socket preinstalled 16MHz crystal FTDI "Bit-Bang" interface pins battery-friendly power routing space to add an optional potentiometer for ARef (analog reference) has a power swtich the RX/TX leds are near the USB jack, meaning you can see them with a shield mounted four mounting holes attractively priced at $26! Freeduino Epic Wow! JK Devices Freeduino 5V/3.3V Hybrid Bhasha Freeduino Lite 2.0

How to build a 5$ Arduino (clone) | Hardware Startup If you are like me and build projects with Arduino, you must have felt the frustration with ripping your project apart, because you wanted to build something else with that Arduino. I have had the same issue many times, so I decided to find a way to solve this once and for all. Hence, how to build an Arduino clone for less than 5$. Warning: Now before we continue a warning. This post explains how to build Arduino cones for less than 5$, but it will mean that you either get creative with you current Arduino to program the Arduino bootloader, or you invest a bit in a standalone ISP programmer and a FTDI interface board (total about 20$ one time investment). The reason we can build a relative cheap Arduino clone is that Arduino consists of the following parts: - USB to serial converter (also known as FTDI) - ATMEGA328p with oscillator and bootloader - 5V power circuit - Bunch of headers So where do I get these cheap ATMEGAs? Like this: Like Loading...

28920 - SB-Freeduino « Products « Solarbotics There is no better open-source way for a BEAM enthusiast to get into microcontrollers. Based on the open-source project from Italy, this Atmel ATMega328 microcontroller is nested into an easy-to-talk-to cocoon o' technology! The development language is very "C"-like, but simpler and runs in a Java-based all-in-one environment supported on Linux, Mac, and Windows. Since it's open-source it has a huge support community, with many, many tutorials and reference code you can draw from. The SB-Freeduino is our own special port of the Arduino project's Diecimila reference design. Then we discovered it was too hard to make pink. This is a cost-saving mini-kit. Seriously, the Arduino is an excellent microcontroller development platform, especially if you're not that well versed in using C on a plain Atmel platform. The Arduino team also created a hardware design for their software to talk to. Surely you may have questions, right? But what’s an Arduino? Is that all there is about it?

Don't Spend Money On An Arduino - Build Your Own For Much Less I love my Arduinos. At any point, I have quite a few projects on the go – prototyping is just so easy with them. But sometimes, I want to keep the project functional without buying another Arduino. The Truth: You Can’t Build a Full Arduino Clone For Cheaper The Arduino itself consists of simple electronics, but it’s the package and the layout you’re really paying for. The beauty of building your own is that you can exclude bits you don’t need to keep costs down, and avoid the Arduino package with all the unused headers and wasted space – if you really need the Arduino shape and headers for use with other shields, then building your own isn’t really going to save you any money. In my case, I wanted to permanently display the LED cube I made somewhere, with an external power supply and not the added cost of using a full Arduino board; there was space left on the protoboard after all, so I’d rather put everything there. Anyway, on with the project. Power Supply Regulator & Indicator LED 1.

Freeduino USB complete KIT (Arduino Duemilanove Compatible) Now the Freeduino USB Kit comes with a mini USB-B connector pre-soldered to the PCB. The Computer Science Division at Allegheny College created some very cool Freeduino USB Kit assembling videos!!! The KIT now includes the ATmega328P microcontroller and requires Arduino IDE version 0013 or higher. Select "Arduino Duemilanove w/ATmega328" in the boards menu. Arduino is an open-source physical computing platform based on a simple I/O board and a development environment that implements the Processing/Wiring language. Arduino received an Honory Mention in the Digital Communities section of the 2006 Ars Electronica Prix. Freeduino (Arduino diecimila compatible) Assembly Instructions. What is included tr>< Requirements You only need a soldering iron, some solder, a multimeter and soldering skills

The World Famous Index of Arduino & Freeduino Knowledge Interfacing a sensor with an Arduino The world of hobby electronics is one that has seen explosive growth and massive changes over the past few years. The biggest changes have come from the level of computing hardware that is available to the hobbyist. From very simple microcontrollers to full PCs on a USB stick, all sorts of options are available. One of the more popular options is the Arduino, which falls between these two extremes. The entire Arduino project has been a proof of the power of open source. In this tutorial, you will get a development environment set up to work with your Arduino. Resources ArduinoArduino Playground Step by Step Step 01 Get your hardware The first step is to select your hardware. Step 02 Plugging in Most Arduino boards interface over USB with the development computer. Step 03 Software Installing the required software has gotten much easier recently. Step 04 Start a new program Now that you have your Arduino plugged in, you can start up your IDE and begin programming your first project. Step 05 Step 06

11 Arduino projects that require major hacking skills—or a bit of insanity Raspberry Pi has received the lion's share of attention devoted to cheap, single-board computers in the past year. But long before the Pi was a gleam in its creators' eyes, there was the Arduino. Unveiled in 2005, Arduino boards don't have the CPU horsepower of a Raspberry Pi. They don't run a full PC operating system either. Arduino isn't obsolete, though—in fact, its plethora of connectivity options makes it the better choice for many electronics projects. While the Pi has 26 GPIO (general purpose input/output) pins that can be programmed to do various tasks, the Arduino DUE (the latest Arduino released in October 2012) has 54 digital I/O pins, 12 analog input pins, and two analog output pins. Arduino's array of inputs and outputs proves crucial in projects from building robots to 3D printers, said Jason Kridner, co-creator of the BeagleBone line of products that combine Raspberry Pi-like horsepower with Arduino-like capabilities. Dublon spent a year testing Tongueduino on himself.

Build a bare bones Arduino clone which maximizes its use of real estate Check out all the stuff crammed into a small swath of strip board. It’s got that characteristic look of a roll-your-own Arduino board, which is exactly what it is. [S. The strips of copper on the bottom of the substrate run perpendicular to the DIP chip and have been sliced in the middle. Pin headers along either side of the board have been altered to allow for soldering from the wrong side of the plastic frames. Ringing in at as little as $2-$4.75 a piece you’ll have no problem leaving this in a project for the long hall.

AnalysIR - IR Analyzer & Decoder with Arduino, Raspberry Pi, and MCU Note: The Kit perks will only be made available to people who have contributed to another perk which includes AnalysIR. Bonus: AnalysIR now includes support for a number of IR Sources including Arduino, Raspberry Pi, USB IR Toy and TI MSP430 Launchpad. ( We have made lots of updates and added more features to AnalysIR...see the Updates Tab above for all the latest News and BONUS FEATURES! ) New KIT Perk added for existing backers. For more updates on this project please visit our Blog AnalysIR was born as part of another leading-edge IR(infra red) project we are working on - Think mega Universal Remote Control meets Arduino & saves the Planet (But don’t tell anyone - it's still a secret). As we are big fans of Arduino (and Raspberry Pi) we implemented a Windows application which connected to an Arduino with the addition of a just ‘one’ component, an IR receiver. What is AnalysIR AnalysIR is made up of 3 components: To give you an idea of the functionality we have provided a copy of the

Freediag - Vehicle Diagnostic Suite OBDuino - Wikiwand This article has multiple issues. Please help improve it or discuss these issues on the talk page. (Learn how and when to remove these template messages) The topic of this article may not meet Wikipedia's general notability guideline. Please help to demonstrate the notability of the topic by citing reliable secondary sources that are independent of the topic and provide significant coverage of it beyond a mere trivial mention. If notability cannot be shown, the article is likely to be merged, redirected, or deleted.Find sources: "OBDuino" – news · newspapers · books · scholar · JSTOR (March 2017) (Learn how and when to remove this template message) This article relies too much on references to primary sources. OBDuino is an open source trip computer design based on the Arduino platform. OBDuino utilises the On-Board Diagnostics interface found in most modern cars. Features Most OBD-II PIDs or derived values may be displayed. Design The key components of the design are: A microcontroller.