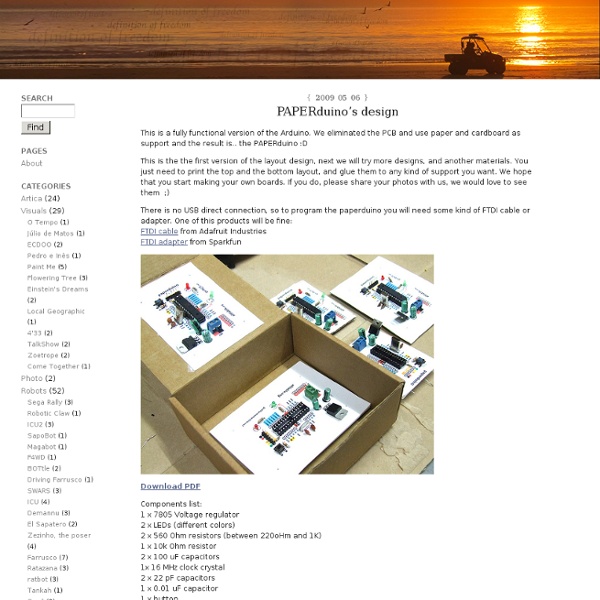 This is a fully functional version of the Arduino. We eliminated the PCB and use paper and cardboard as support and the result is.. the PAPERduino :D This is the the first version of the layout design, next we will try more designs, and another materials. You just need to print the top and the bottom layout, and glue them to any kind of support you want. We hope that you start making your own boards. If you do, please share your photos with us, we would love to see them ;) There is no USB direct connection, so to program the paperduino you will need some kind of FTDI cable or adapter. Download PDF Components list: 1 x 7805 Voltage regulator 2 x LEDs (different colors) 2 x 560 Ohm resistors (between 220oHm and 1K) 1 x 10k Ohm resistor 2 x 100 uF capacitors 1x 16 MHz clock crystal 2 x 22 pF capacitors 1 x 0.01 uF capacitor 1 x button 1 x Atmel ATMega168 1 x socket 28 pin Female and Male headers Instructions: Use a needle to puncture the holes for your components. Follow the connection lines.

“Airduino” Scungy Anemometer Part 1: Detection and Amplification « Keith's Electronics Blog Necessity is said to be the mother of invention, and 90+°F daily temperatures with the air conditioner on the fritz made me feel pretty inventive. Our air conditioner was low on refrigerant and the blower fan motor may be running slower than spec and not moving enough air. Between the two problems, the expansion coil inside the furnace housing would ice up, over a few hours completely blocking the airflow and preventing any meaningful heat exchange. On a weekend when I was home all day, I discovered that I could keep the house fairly cool by setting the blower fan to run all the time, manually monitoring the airflow out the vents, and cycling the AC off when airflow was restricted and back on when it opened up. Introducing the scungy anemometer, or Airduino v0.1, for short. Measuring Airflow My thought was to stick a propeller into the airflow and measure its rate of spin with an optoreflector. Next, I hoped to use an optoreflector pointed at the propellor to measure rate of spin.

“Airduino” Scungy Anemometer Part 2: Digital Connections and Interrupts « Keith's Electronics Blog In part 1 , I described making a propeller out of foil to measure the airflow of my air conditioning system, building an optointerruptor from an LED and a CdS photocell, and amplifying the signal to a usable level. Next, I needed to feed the signal into a digital input on the Arduino. Old-school digital inputs don’t like having analog signals fed into them; but I knew from working with a PIC that some of the Arduino/ATmega pins would probably have Schmitt-trigger inputs, which have hysteresis. A digital input with hysteresis turns on when the analog input becomes higher than an upper threshold but doesn’t turn off until the signal falls below a lower threshold. So imagine my delight to find that every ATmega8/168 input pin has Schmitt-triggering. External Interrupts The ATmega pins that are brought out to Arduino digital pins 2 and 3 are “external interrupt” pins. So my program is exceedingly simple. How Well Does It Work? After that, it worked very well. Installing It . . .

Windmeter / Anemometer by Infidigm Overview The Windmeter is an anemometer designed to measure and record wind speed distribution from 0 to 17+ meters per second. It was designed for high reliability, ease of construction, and for a wide environmental range. Data is logged over a period of 30.46 days (1/12 of a year), and then saved for 11 months. The data can be retrieved with a laptop computer any time within the 12 months of logging. The Windmeter is self-powered by a solar pannel and battery. Here are examples of Actual Data that the Windmeter generates! Skills Required General Electronic Knowledge SMD Soldering PCB Prototyping (Single layer) General Mechanical Knowledge Wood working / power tool / hand tool usage Mechanics of the Windmeter / Anemometer Description The Windmeter / Anemometer is constructed from common parts and supplies. Assembly Read the entire document before beginning construction. Parts List Tools Needed Here is a list of the major tools that were used to make the mechanical parts of the Windmeter. Files

Getting started with Arduino! – Chapter Zero Hello world! Updated 24/11/2012 Please join with us as we learn about electronics and the Arduino! Together through this series of tutorials I would like to share with you a journey of learning, exploration and fun with the Arduino system, and make some enjoyable, useful, interesting, useless and practical things. These posts will be published on a regular basis, on top of the other non-micro controller posts. So let’s get started… There are over fifty chapters in this series, however you should start here (chapter zero). Getting Started with Arduino (Massimo Banzi) and also assume a basic knowledge of electronics. If you would prefer an off-line method of learning, or would like a great book on the topic – consider my book “Arduino Workshop” – it’s the best book on the market for a complete beginner to learn about Arduino. First of all, let’s breakdown the whole system into the basic parts. So, we have hardware and software. Now for the Arduino itself. Great! How did you go? Exercise 0.1

Geiger Counter - Radiation Sensor Board for Arduino Contents Go to IndexManifesto The main finality of the Radiation Sensor Board for Arduino is to help people in Japan to measure the levels of radiation in their everyday life after the unfortunate earthquake and tsunami struck Japan in March 2011 and cause the nuclear radiation leakages in Fukushima. We want to give the chance to measure by themselves this levels instead of trusting in the general advises which are being broadcasted. The usage of this sensor board along with the affordable and easy to use Arduino platform helps people to get radiation values from specific places. As technical guys, we feel the responsibility of providing our support in those areas where we can contribute. The design of the board is open hardware and the source code is released under GPL. The Libelium Team. Go to IndexThe Board The radiation board has two main parts, the power circuit and the signal circuit . Radiation Sensor Board with the SBM-20 Geiger Tube Connecting the Radiation board to Arduino It means: