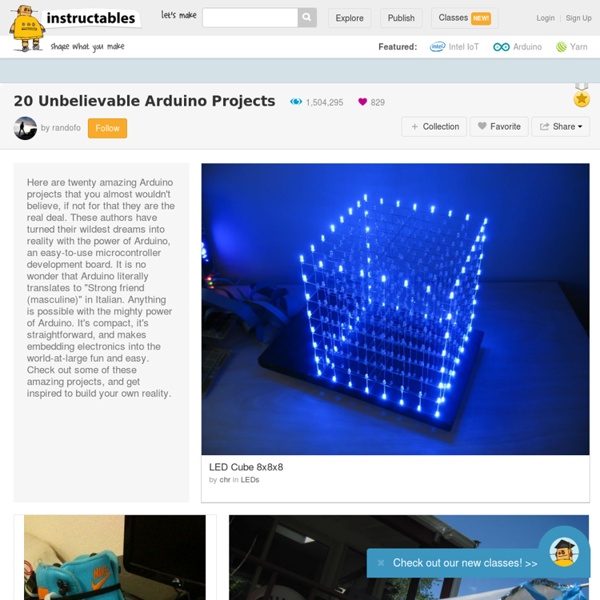 Kaleidoscope with Arduino and RGB LED strips | Cool Arduino I present a new Arduino project: a Kaleidoscope (or something similar), with a list of the simplest materials. You can see the result in the video. It can be used as decoration in a living room or as decoration for the baby's crib. The baby will be surprised ... Very relaxing if it accompanied with Chill out music . Thanks to the advent of addressable LED strips, is extremely simple (and cheap) to create projects with multiple RGB LEDs. The assembly is very simple, just a strip of LEDs 60 leds / m cut into 12 parts of 5 leds each, and mounted on a piece of PVC (forex). A sheet of opal Plexiglas handles diffuse the light of the LEDs and enhance the effect. The circuit is so simple it does not need schema ... just an output pin of the Arduino connected to the input of the strips (DI), and of course, the power supply (GND and 5V). The code performs a series of symmetric random patterns to simulate the operation of a kaleidoscope. You can download the code here:

Which Board is Right for Me? For a few months after Raspberry Pi came out, the choice was pretty simple. If you wanted to talk to arbitrary electronics, your best bet was to buy an Arduino microcontroller board; if you needed the power of an ARM-based processor to run Linux, the Raspberry Pi single-board computer (SBC) was the obvious choice (that is, if you could get your hands on one. Delivery issues are mostly resolved, but last year some people waited more than six months for their Pi). Before Arduino and Raspberry Pi, things were more complicated. Going forward, things aren’t just complicated again — they’re bewildering. We’re now seeing an explosion of new boards coming to market, and there’s no reason to expect the trend to slow in the next year or two. Life Before Arduino The commercial microcontroller story starts, arguably, in 1971, with the arrival of the 4-bit Intel 4004. Still available off-the-shelf today at less than $2 a chip, the PIC is a workhorse. The March of Arduino The Tessel The LaunchPad MSP430

Tree Climbing Robot I started out by creating a basic design in Sketchup. The robot was to consist of two segments, joined by a spine which could be extended or retracted. Each segment would have four legs with very sharp points as feet. To climb, the legs on the top segment would pinch together and the sharp feet would dig into the bark, securing the robot. In my original design (show in the images above), all four legs in each segment were controlled by one highly geared down motor. The other significant change I made from my original design was the way the spine worked. Raspberry Pi Model B+ – Raspberry Pi Projects Using Model B SD Cards On The Model B+ SD cards should be interchangeable between a model B and a model B+ as long as the card was created since the release of the Model B+, or has been inserted into a model B since the B+ was released and these commands entered to update the OS and any other packages supported by apt-get: sudo apt-get update […] Read More → Model B+ Power RPi Power Consumption Varies depending on how busy it is and what peripherals are connected. Model B+ IO Pins Note that we are not currently sure if the new pin 27-40 PWM1, GPCLK1 and GPCLK2 peripheral pin functions will be made accessible under Raspbian and if so which pins they will be assigned to, hence the duplicated pins shown with these functions. Model B+ schematics The model B+ schematic is available from here. Model B+ CAD & Mounting Info The Raspberry Pi PCB measures 85mm x 56.2mm excluding overhanging connectors and is 20.8mm high.

MeanPC - Pickers and eBay Sellers: Lego Mindstorms vs. Arduino for amateur robotics I recently saw the newest Lego Mindstorms kit, the NXT 2.0, and was blown away by what people were doing with it. If you search YouTube, you can find some truly incredible robots people have created with the Lego Nxt 2.0 platform. So I started showing the Mindstorm's videos to my 9 year old daughter and she seemed really interested and told me she would like to learn how to build robots like that. This was a couple of months ago. Last week, she brought it up again out of the blue. I wanted to get her this for Christmas, but there are two problems. So, I was going to just get her one of those electronic project kits - the kind that you connect the components together using wires in between the springs. While I was looking, I kept running across this thing called Arduino. The Arduino solution provides a lot more functionality. The Arduino is able to connect to almost any analog or digital device. If you find your project needs an additional Lego NXT brick, it will cost you $140.

Lightweight Low Power Arduino Library – Rocket Scream We have just release the 1st revision of our low power library for Arduino. This is a simple and easy to use library that has the following features: Supports all sleeping mode of ATmega328P: Idle.ADC reduction mode.Power save.Power down.Standby.Extended standby.Selectable sleep duration: 15 ms, 30 ms, 60 ms, 120 ms, 250 ms, 500 ms, 1 s, 2 s, 4 s, 8 s, and forever (wake up using other resources) through on chip 125 kHz Watchdog timer. We didn’t add any wake up functionality except using the Watchdog timer module to allow certain amount of sleep duration as we think other wake up resources (interrupt on pins, TWI address match, ADC conversion complete, SPI serial transfer complete, EEPROM ready) are closely bind to the external peripheral or interface it is connected to. Using our Mini Ultra 8 MHz (we are assembling an army of them right now using our reflow oven controller shield) and revision 1.0 of the library yields the following current consumption measurement result.

Arduino Tutorial - Learn electronics and microcontrollers using Arduino! So, I get two or three emails a day, all basically asking the same thing: "Where can I learn about electronics?" In general, most of these people have seen some of my projects and want to be able to build similar things. Unfortunately, I have never been able to point them to a good site that really takes the reader through a solid introduction to microcontrollers and basic electronics. I designed this tutorial course to accompany the Arduino starter pack sold at the Adafruit webshop. Follow these lessons for happiness and prosperity. Lesson 0 Pre-flight check...Is your Arduino and computer ready? Here are some recommended tools: If you need to get any soldering done, you may also want.... All of the content in the Arduino Tutorial is CC 2.5 Share-Alike Attrib. Love it? To some extent, the structure of the material borrows from: The impressively good "What's a microcontroller?" "Spooky Arduino" - Todbot's excellent (if fast-paced!)

Getting Started Kit - kraegar Decided to take a stab at putting together a list of parts for getting started with Arduino, using Amazon.com as a supplier. I know you can shop around and find this cheaper, but most people like & use Amazon already. This may come out more expensive than other kits available, too, but the quantity of parts should be much, much higher. I know a lot of people say to buy stuff direct on Ebay, but shipping times are horrible, and quality is unknown. Core Arduino Uno R3 - $22 (Up to $29 now... microcenter has them for $15 each currently though!) Basic Electronic Components Output Speaker (steal one from a small toy, I couldn't find a cheap one to recommend) Sensors Extras - Optional Items that are inexpensive and useful Search Adafruit for Headers & Jumper Wires - they come in handy.

An Arduino Guide - Getting Started For Beginners Table Of Contents §1–Intro to the Arduino §2–What Can You Do With an Arduino? §3–What Is Inside an Arduino? §4–What You Will Need For This Guide §5–Electrical Component Overview §6–Programming Overview §7–Setting Up Your Arduino §8–Starter Projects §9–Where to go From Here 1. Arduino is an open-source electronics prototyping platform based on flexible, easy-to use hardware and software. Arduino can sense the environment by receiving input from a variety of sensors and can affect its surroundings by controlling lights, motors, and other actuators. There are plenty of other microcontrollers available. That is what this Arduino guide is about. In addition to Arduino’s simplicity, it is also inexpensive, cross-platform and open source. Believe it or not, even relatively inexperienced users can build a version of the Arduino module on a breadboard in order to understand how it works and save a little bit of money. 2. There is a lot you can do with an Arduino. 3. 4. 5. 5.1 What is a Breadboard? 6. ! a !

8 alternatives to the Raspberry Pi : Page 2 A favorite of the maker and tinkerer community, the Raspberry Pi microcomputer has inspired people to create some amazing things from home automation systems to time-lapse photography rigs. At $35, the computer is at a price that most DIYers can afford which is a large part of its success, but it's also a very stripped down computer. Lately, a range of microcomputers have come on the market trying to steal some of the Raspberry Pi's thunder, many of which have more processing power and features. If you're in the market for some hardware to use in your next genius project, click through for 8 Raspberry Pi alternatives. Make a Simple RC (Remote Controlled) Robot Car - Embed Journal Whether you are an engineering student building a multi terrain vehicle or an electronics hobbyist trying to impress people with your skills, making a RC robot car (wireless) is much better than the wired robot which you will have to tail while driving. This is not exactly a robotics project. By definition, a robot is something that makes a decision based on some external parameters. There is one hell lot to do before going around telling people ‘I build robots’ but hey, you got to start somewhere right? Objectives We will discuss a basic ‘Land Rover’ with nothing. The emphasis is just on the mechanical design and some basic circuitry. Things you will need: Most of the components that we will be using are really common and can be bought in local electronics stores. Just be extra cautious when buying the RF Rx-Tx module. DC MotorsWheelsChassisL293D motor driver ICHT12E encoder ICHT12D decoder ICRF Rx-Tx ModuleTactile Switches12V Battery packSome basic tools and soldering iron. PCB Art work