American Memory from the Library of Congress - Home Page 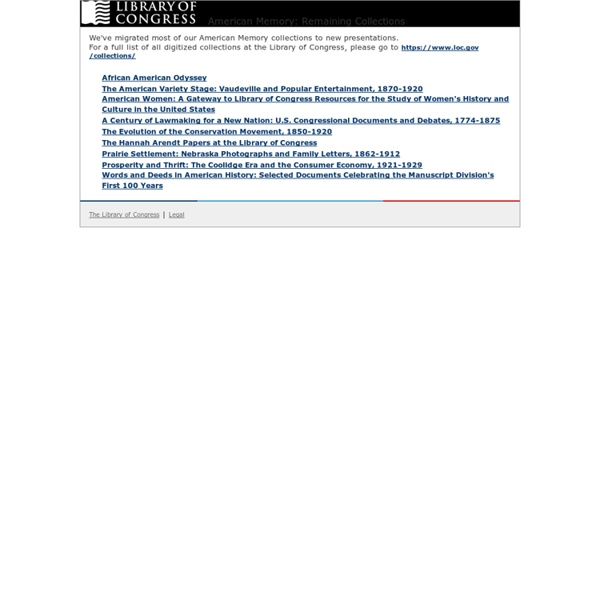 Resources High School Lessons (article PDF) From Social EducationThe Technology of Unequal Rights for Women: Patent Drawings of a Voting Machine Middle Level Lessons (whole-issue PDF) From Middle Level LearningRevolutionary Women: Portraits of Life in the 13 Colonies Elementary Lessons (article PDF) From Social Studies and the Young LearnerJane Addams: Raising Up the Poor National Art Inventories What are the Inventories? The Inventories of American Painting and Sculpture document more than 400,000 artworks in public and private collections worldwide. The Inventory of American Paintings includes works by artists who were active in America by 1914. The Inventory of American Sculpture has no cut-off date and includes works from the colonial era through contemporary times. These online databases are supplemented by a photographic collection of over 80,000 images.

US History Websites with the Common Core Forty-five states have implemented the Common Core State Standards in ELA and Mathematics for every subject. These standards are not intended to drive history and other subjects away from the curriculum, but they are designed to encourage our students to be critical readers who can apply the knowledge they learned. These standards are intended to engage students in the history curriculum and teach them skills needed to be successful. The websites listed below are useful to supplement the curriculum and teach students the skills needed to be successful 21st century learners. Under Common Core Student’s will be encouraged to:

Where to Find Old Films Online, Streamed Legally and for Free Squeak the Squirrel one of the many educational films available for free online Dave Kehr recently wrote in the New York Times about how websites like Netflix Instant and Hulu Plus are giving users access to hard-to-find films like Edgar G. Ulmer’s Ruthless (1948). Kehr cited Netflix’s collection of films from Paramount, Universal and Fox, as a chance for users to see movies that have not yet been released on home formats.

Archival resources from the Library of Congress for exploring many aspects of American history and culture. by nda_librarian Apr 30

American Memory provides free and open access through the Internet to written and spoken words, sound recordings, still and moving images, prints, maps, and sheet music that document the American experience. It is a digital record of American history and creativity. These materials, from the collections of the Library of Congress and other institutions, chronicle historical events, people, places, and ideas that continue to shape America, serving the public as a resource for education and lifelong learning. by feillet Oct 12