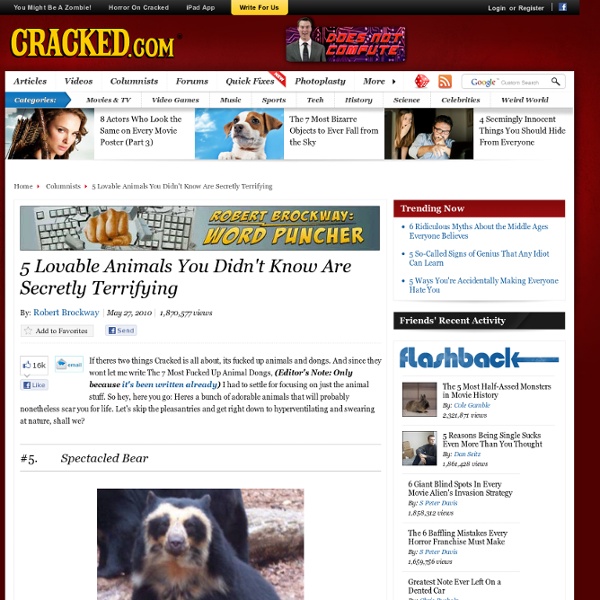 If there’s two things Cracked is all about, it’s fucked up animals and dongs. And since they won’t let me write “The 7 Most Fucked Up Animal Dongs,” (Editor's Note: Only because it's been written already) I had to settle for focusing on just the animal stuff. So hey, here you go: Here’s a bunch of adorable animals that will probably nonetheless scar you for life. Let's skip the pleasantries and get right down to hyperventilating and swearing at nature, shall we? Bears are pretty intrinsically scary, but come on – look at that guy! That’s not a bear, that’s a fat raccoon. Holy shit! If there was a color-coded scale for cuteness like there is for Terror Alert Levels, the red fox would be at Level Orange: way above Adorable Bomb Threat and just half a notch below Snuggle Jihad. I would name him Mr. Now, here’s the sound he makes: If you came of age in a small town, you’re probably already familiar with the sound red foxes make. You: Jesus, this weed is amazing. You: Don’t "what was what?"

The Unreal Universe Reality, as we sense it, is not quite real. The stars we see in the night sky, for instance, are not really there. They may have moved or even died by the time we get to see them. This unreality is due to the time it takes for light from the distant stars and galaxies to reach us. Wild Polar Bear vs Dogs Norbert Rosing took these images of a wild polar bear coming upon his tethered sled dogs in the wilds of Canada's Hudson Bay. The Polar Bear returned every night that week to play with the dogs. 1920s Slang - Camarilla Wiki - StumbleUpon Welcome to White-Wolf.com. White Wolf Publishing has produced gaming universes for over 20 years including World of Darkness, Exalted, Trinity, and many more. White Wolf merged with CCP Games to focus on translating the World of Darkness IP into a massively multiplayer experience, and the North American office is fully dedicated to making this evolution a reality. In order to continue to support our existing RPG and LARP communities, we have entered into a number of partnerships with individuals and groups who can focus their full attention on the art forms White Wolf created and lived in. Digital Publishing and Print On Demand Both new and classic White Wolf products are available for digital download and Print On Demand through DriveThruRPG.com.

5 Terrifyingly Advanced Ways Animals Know How to Kill #2. Tarantula Hawk Paul Nylander, via Tucson Citizen Allow me to set your mind at ease for once: A tarantula hawk is not a flying tarantula. 10 Ways Our Minds Warp Time How time perception is warped by life-threatening situations, eye movements, tiredness, hypnosis, age, the emotions and more… The mind does funny things to our experience of time. Just ask French cave expert Michel Siffre. In 1962 Siffre went to live in a cave that was completely isolated from mechanical clocks and natural light. He soon began to experience a huge change in his perception of time.

5 Classic Games You Didn't Know Had WTF Backstories #2. Double Dragon Via Meulie.net What we thought was going on: Teacher Fired For Giving Extremely Morbid, Traumatizing Math Problems To D.C. Third Graders (VIDEO) (DOCUMENT) A Washington, D.C. teacher who sent home violent, morbid and traumatizing math problems to third graders from Center City Public Charter School's Trinidad campus has been fired, WUSA-TV reports. (Scroll for full math worksheet) Two of the problems, courtesy of the station: #2. My 3 friends and I were caught and tied up by 1023 screaming cannibals in a jungle last night.

5 Terrifyingly Advanced Ways Animals Know How to Kill Whether you know it or not, humanity is fighting a war right now, and we are losing. Badly. That's because this fight is with Mother Nature herself, and while you're over there on the other side of this screen, microwaving tea and knitting tiny sweaters, that bitch is out there building biological superweapons 24/7. 10 Fascinating Cases of Mind Control Animals Controlling the minds of other living creatures is simply the stuff of science fiction right? Well for some creatures becoming a real live zombie is a daily hazard. Here are 10 examples of real parasitic behavior modifications. These are in no particular order.