These chlorella facts will show you that it is one of the best live superfoods. The most important chlorella facts you should keep in mind are the ones presented in this article. 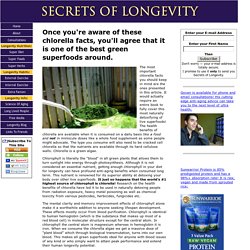 It would actually require an entire book to fully cover this most naturally detoxifying of live superfoods! The health benefits of chlorella are available when it is consumed on a daily basis like a food and not in miniscule doses like a whole food supplement as some people might advocate. The type you consume will also need to be cracked cell chlorella so that the nutrients are available through its hard cellulose walls. Chlorella is a green algae. Chlorophyll is literally the "blood" in all green plants that allows them to turn sunlight into energy through photosynthesis. The mental clarity and memory improvement effects of chlorophyll alone make it a worthwhile addition to anyone seeking lifespan development. Of all the known chlorella facts, perhaps the most well-known is its renowned ability for detoxing your body.

The chlorella algae is the fastest growing food crop known to humans. 7 Proven Chlorella Benefits and Side Effects (#2 is Best) Are you looking for an all-natural supplement that boosts your energy, supports fat loss and helps detox heavy metals like lead and mercury from your body? 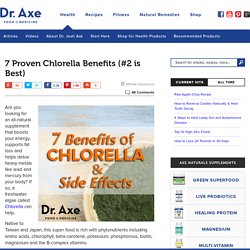 If so, a freshwater algae called Chlorella can help. Native to Taiwan and Japan, this super food is rich with phytonutrients including amino acids, chlorophyll, beta-carotene, potassium, phosphorous, biotin, magnesium and the B-complex vitamins. Chlorella is a blue-green algae like it’s cousin to spirulina and we compare the nutrients of these superfoods later in the article. Studies have shown that Chlorella benefits the entire body by supporting healthy hormonal function, good cardiovascular health, helps to negate the effects of chemotherapy and radiation, lowers blood pressure and cholesterol, and aids in the detoxification of our bodies. The rich green color comes from the high concentration of chlorophyll.

While juicing is another option, the time involved is simply too much for most people. Chlorella Nutrition Facts •Protein 16g. Home Made LSA. To all my American readers, please accept my apologies. 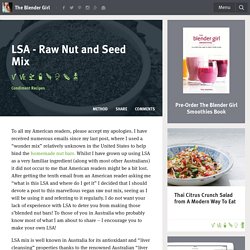 I have received numerous emails since my last post, where I used a “wonder mix” relatively unknown in the United States to help bind the homemade nut bars. Whilst I have grown up using LSA as a very familiar ingredient (along with most other Australians) it did not occur to me that American readers might be a bit lost. After getting the tenth email from an American reader asking me “what is this LSA and where do I get it” I decided that I should devote a post to this marvellous vegan raw nut mix, seeing as I will be using it and referring to it regularly. I do not want your lack of experience with LSA to deter you from making those s’blended nut bars! To those of you in Australia who probably know most of what I am about to share -- I encourage you to make your own LSA! So what is LSA? I am addicted to homemade LSA and eat it on a daily basis, adding it to my vegan smoothies and vegan avocado shakes. Health Benefits of Chia Seeds. Chia seeds impart many health benefits, some of which include controlling diabetes, lowering cholesterol levels, improving the digestive system, boosting heart health, controlling hypertension, and they even contain anti-inflammatory properties. 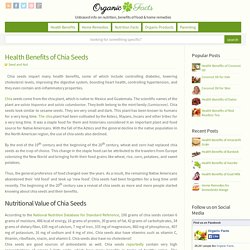 Chia seeds come from the chia plant, which is native to Mexico and Guatemala. The scientific names of the plant are salvia hispanica and salvia columbariae. They both belong to the mint family (Lamiaceae). Chia seeds look similar to sesame seeds. They are very small and dark. By the end of the 19th century and the beginning of the 20th century, wheat and corn had replaced chia seeds as the crop of choice. Thus, the general preference of food changed over the years. 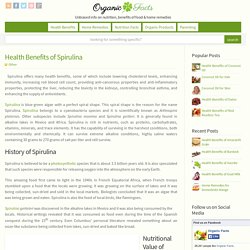 Spirulina is blue-green algae with a perfect spiral shape. This spiral shape is the reason for the name Spirulina. Spirulina belongs to a cyanobacteria species and it is scientifically known as Arthrospira platensis. Other subspecies include Spirulina maxima and Spirulina geitleri. It is generally found in alkaline lakes in Mexico and Africa. History of Spirulina Spirulina is believed to be a photosynthetic species that is about 3.5 billion years old. This amazing food first came to light in the 1940s in French Equatorial Africa, when French troops stumbled upon a food that the locals were growing. Health Benefits of Chlorophyll. Health benefits of chlorophyll include strengthening of blood making organs, prevention of anemia and abundance of oxygen in the body. 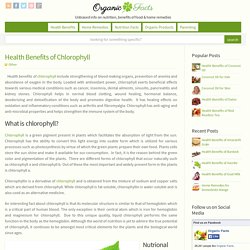