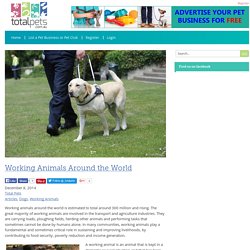 The great majority of working animals are involved in the transport and agriculture industries. About the animals - AWAMO. Throughout history, in war and in peacetime, animals and mankind have worked alongside each other. 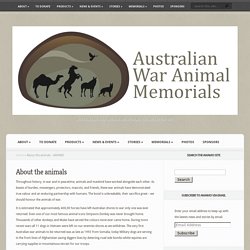 As beasts of burden, messengers, protectors, mascots, and friends, these war animals have demonstrated true valour and an enduring partnership with humans. The bond is unbreakable, their sacrifice great – we should honour the animals of war. It is estimated that approximately 400,00 horses have left Australian shores to war only one was ever returned. Even one of our most famous animal icons Simpsons Donkey was never brought home. Thousands of other donkeys and Mules have served the colours none ever came home. Currently within the ADF the use of animals in fact is on the increase as opposed to decline. Horses General Bridges died in May 1915 from a wound sustained at Gallipoli his horse returned to Australia after a tour of duty which included the coast of Gallipoli, Egypt and France. Information from: Australian War Memorial Around 160,000 Australian horses served in World War I. 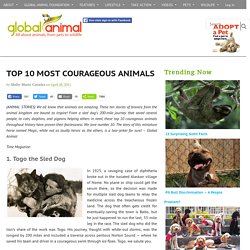 These ten stories of bravery from the animal kingdom are bound to inspire! From a sled dog’s 200-mile journey that saved several people, to cats, dolphins, and pigeons helping others in need, these top 10 courageous animals throughout history have proven their fearlessness. We love number 10. The story of this miniature horse named Magic, while not as loudly heroic as the others, is a tear-jerker for sure! – Global Animal Time Magazine: 1. In 1925, a ravaging case of diphtheria broke out in the isolated Alaskan village of Nome. 2. Bucephalus was the famed steed of Alexander the Great. 3. Stubby was just another stray dog before he found his way into an area near Yale University where the 102nd infantry, Yankee Division was training for World War I.

He was allowed to join the soldiers on the front lines, where he was once injured during a gas strike. Down with boring sentences! Wonderful words and creative stories about pets - English (3,4,5) For all creatures great & small. Animals. Over 20,000 dogs come into our shelters each year. 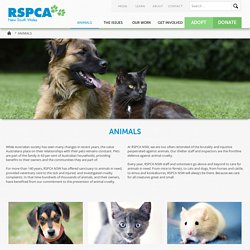 Find out what RSPCA NSW does to help dogs and how you can get involved. Learn More > Cats and humans have been together for a long time, but as a community, we still struggle with two main issues: desexing and containment. Learn More > Their size may be small, but their capacity for love is huge. Learn More > Reptiles can make wonderful pets, but the illegal trade of our native wildlife can compromise their welfare. 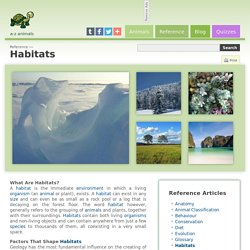 A habitat is the immediate environment in which a living organism (an animal or plant), exists. A habitat can exist in any size and can even be as small as a rock pool or a log that is decaying on the forest floor. The word habitat however, generally refers to the grouping of animals and plants, together with their surroundings. Habitats contain both living organisms and non-living objects and can contain anywhere from just a few species to thousands of them, all coexisting in a very small space. Factors That Shape Habitats Geology has the most fundamental influence on the creating of habitats, along with climate. Chemical Cycles In every habitat on earth constant chemical cycles are taking place, as chemicals are transferred from one organism to another. Biodiversity For years now, the incredible variety of species (and the variety within species) has fascinated scientists all around the world.

Animal Distribution. A to Z Index of Animals - A-Z Animals. BBC Earth. BBC One - Deadly 60 on a Mission - Clips. Australia - National Geographic. The Thylacine Museum - A Natural History of the Tasmanian Tiger. Welcome to The Thylacine Museum, an online scientific and educational resource promoting a greater awareness and understanding of the thylacine, or Tasmanian tiger. 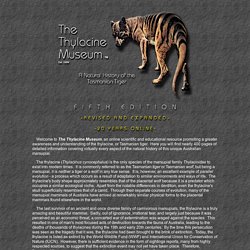 Here you will find nearly 400 pages of detailed information covering virtually every aspect of the natural history of this unique Australian marsupial. The thylacine (Thylacinus cynocephalus) is the only species of the marsupial family Thylacinidae to exist into modern times. It is commonly referred to as the Tasmanian tiger or Tasmanian wolf, but being a marsupial, it is neither a tiger or a wolf in any true sense. It is, however, an excellent example of parallel evolution - a process which occurs as a result of adaptation to similar environments and ways of life.

The thylacine's body shape approximately resembles that of the placental wolf because it is a predator which occupies a similar ecological niche. I am most grateful to my colleague Dr. Cameron R. Foreword by Col Bailey. Taronga Zoo Sydney. San Diego Zoo - Kids. UK Zoos Zoological Society of London - ZSL.