15 Plants That Teach Us Sacred Geometry At Its Finest. Plant growth is governed by the Fibonacci sequence, which can be understood as a law of accumulation. 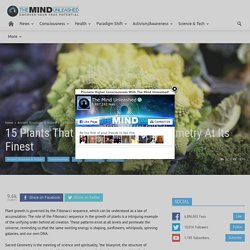 The role of the Fibonacci sequence in the growth of plants is a intriguing example of the unifying order behind all creation. These patterns exist at all levels and permeate the universe, reminding us that the same swirling energy is shaping, sunflowers, whirlpools, spinning galaxies, and our own DNA. Sacred Geometry is the meeting of science and spirituality, ‘the blueprint, the structure of spacetime that organizes matter.’ It is an ancient science that explores and explains the language or building blocks of all things in our Universe. When one looks into the absolutely vast amount of information that has been collected on the extensive number of forms in which Nature employs the proportion of Phi, it is obvious that there is no other specific number that recurs throughout life on Earth with such regularity. Here are 15 plants that perfectly demonstrate this principle: Метаморфози - Списание Осем. 1. 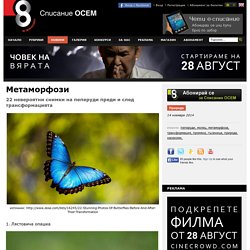 Лястовича опашка 2. Молец брамин 3. 25+ Extremely Pretty Stones and Minerals. 21 Photos Of Nature Winning The Battle Against Civilization. As solid and unshakable as we think our civilization is, its grip on nature is tenuous at best. 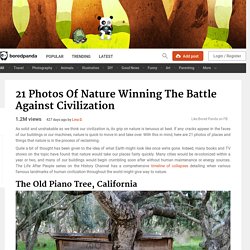 If any cracks appear in the faces of our buildings or our machines, nature is quick to move in and take over. With this in mind, here are 21 photos of places and things that nature is in the process of reclaiming. Quite a bit of thought has been given to the idea of what Earth might look like once we’re gone. Indeed, many books and TV shows on the topic have found that nature would take our places fairly quickly.

Many cities would be re-colonized within a year or two, and many of our buildings would begin crumbling soon after without human maintenance or energy sources. The Old Piano Tree, California Image credits: Crackoala Trees Winning Against Concrete In Hong Kong Image credits: Romain JL Abandoned Inner City Railway In Paris. Fascinating Photos of Reindeer People Living in Mongolia. After living in Nepal and exploring Tibet and the Himalayas for more than a decade, photographer Hamid Sardar-Afkhami decided he would travel to outer Mongolia to document the nomadic tribes and their unique way of life. 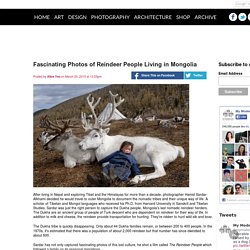 A scholar of Tibetan and Mongol languages who received his Ph.D. from Harvard University in Sanskrit and Tibetan Studies, Sardar was just the right person to capture the Dukha people, Mongolia's last nomadic reindeer herders. The Dukha are an ancient group of people of Turk descent who are dependent on reindeer for their way of life.

In addition to milk and cheese, the reindeer provide transportation for hunting. They're ridden to hunt wild elk and boar. The Dukha tribe is quickly disappearing. Sardar has not only captured fascinating photos of this lost culture, he shot a film called The Reindeer People which followed a family on its seasonal migrations. Global Forest Watch. Plants Are Far More Intelligent Than We Ever Assumed. Like higher organisms, plants appear able to make complex decisions. 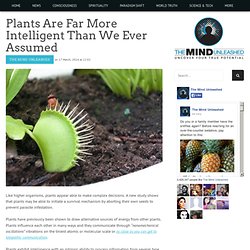 A new study shows that plants may be able to initiate a survival mechanism by aborting their own seeds to prevent parasite infestation. Plants have previously been shown to draw alternative sources of energy from other plants. Plants influence each other in many ways and they communicate through “nanomechanical oscillations” vibrations on the tiniest atomic or molecular scale or as close as you can get to telepathic communication. Plants exhibit intelligence with an intrinsic ability to process information from several type of stimuli that allows optimal decisions about future activities in a given environment. Stefano Mancuso from the International Laboratory of Plant Neurobiology at the University of Florence, Italy, and his colleagues are starting to apply rigorous standards to study plant hearing (Trends in Plant Sciences, vol17, p323). This led scientists to examine the seeds of the Barberry more closely. 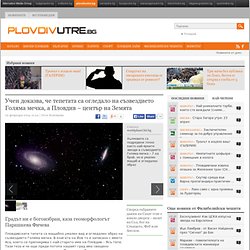