What do animals eat?

What Do Hedgehogs Eat? The African pygmy hedgehog is the most often type of hedgehog to be domesticated and kept as a pet by many consumers. 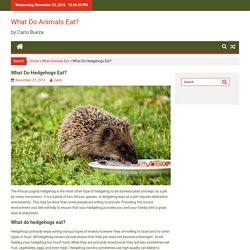 It is a hybrid of two African species. A Hedgehog kept as a pet requires dedication and patience. This may be more than some people are willing to provide. Providing the correct environment and diet will help to ensure that your hedgehog provides you and your family with a great deal of enjoyment. What do hedgehogs eat? Hedgehogs primarily enjoy eating various types of insects however they are willing to taste and try other types of food. Kibble can be supplemented with a variety of foods such as chopped cooked skinless chicken, fruit and vegetables, mashed peas or even sweet potatoes or applesauce.

Avoid feeding wild insects to your pet since they may contain insecticides and disease that could affect your pet. Can you keep a hedgehog as a pet legally in your area? The hedgehog is considered an exotic pet. Is your hedgehog healthy? Adapting your pet to its new home. What Do Tadpoles Eat? Raising tadpoles provides one of the most interesting and remarkable opportunities to learn about nature. 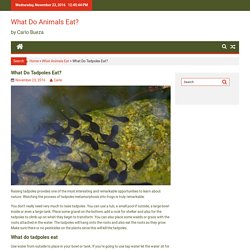 Watching the process of tadpoles metamorphosis into frogs is truly remarkable. You don’t really need very much to raise tadpoles. You can use a tub, a small pool if outside, a large bowl inside or even a large tank. Place some gravel on the bottom, add a rock for shelter and also for the tadpoles to climb up on when they begin to transform. You can also place some weeds or grass with the roots attached in the water. What Do Elephants Eat? Elephants are the largest terrestrial animals that exist in the world. 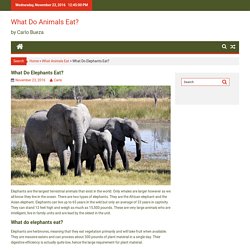 Only whales are larger however as we all know they live in the ocean. There are two types of elephants. They are the African elephant and the Asian elephant. Elephants can live up to 65 years in the wild but only an average of 33 years in captivity. They can stand 13 feet high and weigh as much as 15,500 pounds. What do elephants eat? Elephants are herbivores, meaning that they eat vegetation primarily and will take fruit when available. Wild elephants are herbivores and primarily browse plant material and any fruit when they can get it.

At your local zoo where most of us will see elephants for the first time, they are fed oat grass, bamboo and various fruits and vegetables. What Do Animals Eat? Earthworms can be found almost anywhere where there is moisture and decaying material. 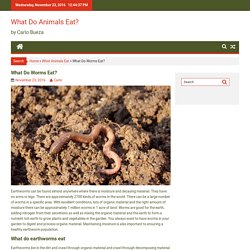 They have no arms or legs. There are approximately 2700 kinds of worms in the world. There can be a large number of worms in a specific area. With excellent conditions, lots of organic material and the right amount of moisture there can be approximately 1 million worms in 1 acre of land. Worms are good for the earth, adding nitrogen from their secretions as well as mixing the organic material and the earth to form a nutrient rich earth to grow plants and vegetables in the garden. What do earthworms eat Earthworms live in the dirt and crawl through organic material and crawl through decomposing material eating as they go.

Citrus fruits such as oranges, grapefruit and lemons can be deadly for worms. One interesting fact about earthworms is that they consume small stones. How large are earthworms. What Do Polar Bears Eat? Polar bears are among the largest carnivores in the world. 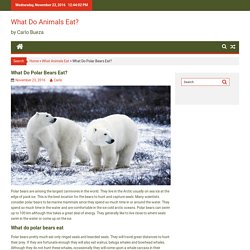 They live in the Arctic usually on sea ice at the edge of pack ice. This is the best location for the bears to hunt and capture seals. Many scientists consider polar bears to be marine mammals since they spend so much time in or around the water. They spend so much time in the water and are comfortable in the ice cold arctic oceans. Polar bears can swim up to 100 km although this takes a great deal of energy. What do polar bears eat Polar bears pretty much eat only ringed seals and bearded seals. Birds eggs and also vegetation are sometimes eaten by the polar bears if they are hungry enough. How can they survive in the cold weather of the arctic? Polar bears have adapted well to the cold weather in the Arctic. More facts about polar bears. What Do Possums Eat? Possums have adapted well to the expansion of human population. 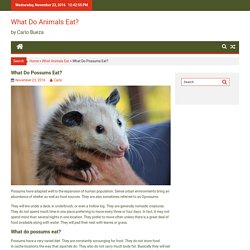 Dense urban environments bring an abundance of shelter as well as food sources. They are also sometimes referred to as Opossums. They will live under a deck, in underbrush, or even a hollow log. They are generally nomadic creatures. They do not spend much time in one place preferring to move every three or four days. What do possums eat? Possums have a very varied diet. In urban areas they will forage for food that consumers put out for their pets, including birdseed, dog and cat food. Marsupial or Mammal?

Possums are considered to be marsupials. Possums are generally nocturnal animals and will travel several kilometers while foraging at night. A Possums front feet have five fingers, while their rear feet have four fingers and an opposing thumb.