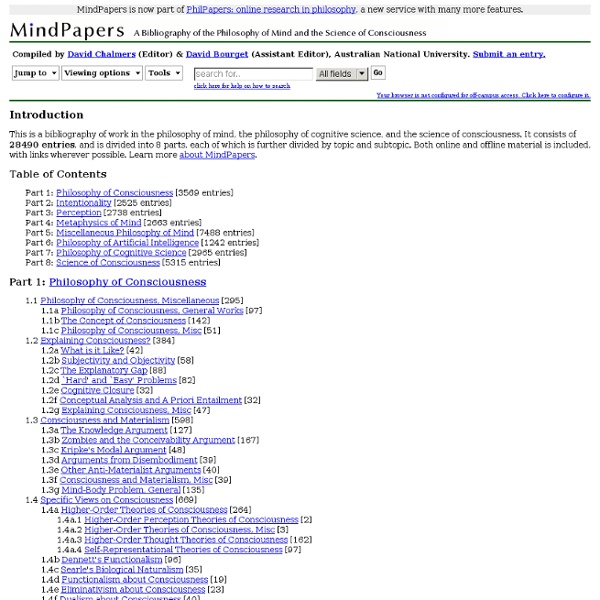 Search tips There are two kinds of search you can perform on MindPapers: All fields This mode searches for entries containing the entered words in their title, author, date, comment field, or in any of many other fields showing on MindPapers pages. Entries are ranked by their relevance as calculated from the informativeness of the words they contain and their numbers. You may search for a literal string composed of several words by putting them in double quotation marks (") Surname This mode searches for entries containing the text string you entered in their author field. Remember: viewing options in the menu above affect the results you get when searching. Note that short and / or common words are ignored by the search engine. Related:  Consciousness

Tim van Gelder Reality and Consciousness: Metaphysics Metaphysics is a traditional branch of philosophy concerned with explaining the fundamental nature of being and the world that encompasses it,[1] although the term is not easily defined.[2] Traditionally, metaphysics attempts to answer two basic questions in the broadest possible terms:[3] Ultimately, what is there?What is it like? Prior to the modern history of science, scientific questions were addressed as a part of metaphysics known as natural philosophy. Etymology[edit] However, once the name was given, the commentators sought to find intrinsic reasons for its appropriateness. There is a widespread use of the term in current popular literature which replicates this understanding, i.e. that the metaphysical equates to the non-physical: thus, "metaphysical healing" means healing by means of remedies that are not physical.[8] Central questions[edit] Cosmology and cosmogony[edit] Cosmogony deals specifically with the origin of the universe. Determinism and free will[edit] [edit] [edit] [edit]

Infinite Being - Mysticism As A Key To Scientific Breakthroughs {*style:<b><i> Mysticism As A Key To Scientific Breakthroughs </i></b>*} Mystics are visionaries. That’s what gives them the edge in scientific research. Newton, Faraday and Einstein were all examples of mystics. Mysticism is a learned skill, just like learning to ride a bicycle, and it is an exact science. Mysticism is the act of going within. It is a paradox that higher frequencies of consciousness are obtained by lowering the frequency of the brain. Higher consciousness is a frequency of mind, not a higher electrical brainwave activity. This primal, carrier field is the fabric of the universe. In her ground-breaking book The Field , Lynne McTaggart weaves together a compendium of how this primal, universal Field underlies virtually all phenomena in life. Higher energies, in the form of etheric or life energy, also resonate in the Field just as electrical energy does. The Field plays host to the mental/emotional atmosphere of humanity around the Earth. {*style:<b>Robert Boyle {*style:<b>

Reductionism Descartes held that non-human animals could be reductively explained as automata — De homine, 1662. Reductionism strongly reflects a certain perspective on causality. In a reductionist framework, the phenomena that can be explained completely in terms of relations between other more fundamental phenomena, are called epiphenomena. Often there is an implication that the epiphenomenon exerts no causal agency on the fundamental phenomena that explain it. Reductionism does not preclude the existence of what might be called emergent phenomena, but it does imply the ability to understand those phenomena completely in terms of the processes from which they are composed. Religious reductionism generally attempts to explain religion by boiling it down to certain nonreligious causes. Types[edit] Richard H. Theoretical reductionism[edit] Theoretical reduction is the process by which one theory absorbs another. Methodological reductionism[edit] Ontological reductionism[edit] In mathematics[edit]

Hard problem of consciousness The existence of a "hard problem" is controversial and has been disputed by some philosophers.[4][5] Providing an answer to this question could lie in understanding the roles that physical processes play in creating consciousness and the extent to which these processes create our subjective qualities of experience.[3] Several questions about consciousness must be resolved in order to acquire a full understanding of it. These questions include, but are not limited to, whether being conscious could be wholly described in physical terms, such as the aggregation of neural processes in the brain. If consciousness cannot be explained exclusively by physical events, it must transcend the capabilities of physical systems and require an explanation of nonphysical means. Formulation of the problem[edit] Chalmers' formulation[edit] In Facing Up to the Problem of Consciousness, Chalmers wrote:[3] Easy problems[edit] Other formulations[edit] Various formulations of the "hard problem": T.H. Responses[edit]