The Fourth Density at Lyratek.com. I still remember vividly, when I was about 10 or 11 years old, thinking that my all-pervasive conscious awareness could be focused anywhere in the world, thinking any of trillions of combinations of thoughts and directing countless number of actions and interactions.... and yet here it was focused entirely within this one individual young person, sitting in a long, bright yellow school bus, staring out the window at the grass and countryside. 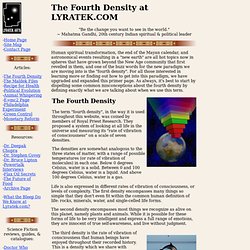 And I wondered, why this individual? What in particular am I here to learn by becoming him? The thought sent a chill down my spine, and a thrill through my mind, largely because it was so new. Fourth density consciousness. Welcome to Fourth Density - Exercise - the Now - Acclimating - Being - Reality - Consciousness - in the Moment - Being Stuck. 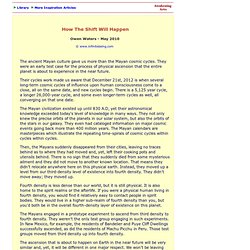 They were an early test case for the process of physical ascension that the entire planet is about to experience in the near future. Their cycles work made us aware that December 21st, 2012 is when several long-term cosmic cycles of influence upon human consciousness come to a close, all on the same date, and new cycles begin. There is a 5,125 year cycle, a longer 26,000-year cycle, and some even longer-term cycles as well, all converging on that one date. The Mayan civilization existed up until 830 A.D, yet their astronomical knowledge exceeded today's level of knowledge in many ways.

Life Principles. When you realize your ability to feel good, you will ask no one to make changes so that you could feel better.The following principles are inspired by many teachings of the Universe, particularly The Four Agreements and The Voice of Knowledge by Don Miguel Ruiz and Loving What Is by Byron Katie, Abraham Hicks, and David Hawkins. 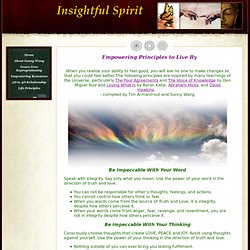 . - compiled by Tim Armantrout and Sunny Wang Be Impeccable With Your Word Speak with integrity. Say only what you mean. You can not be responsible for other’s thoughts, feelings, and actions. Be Impeccable With Your Thinking Consciously choose thoughts that create LOVE, PEACE and JOY. Nothing outside of you can ever bring you lasting fulfillment. Give Yourself the Credit You Deserve Your inner wisdom (God-Consciousness) is your teacher. Take Nothing Personally. How The Shift Will Happen. How The Shift Will Happen by Owen K Waters The ancient Mayan culture gave us more than the Mayan cosmic cycles. 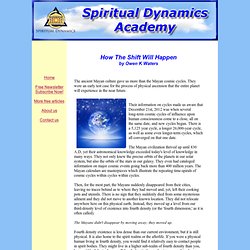 They were an early test case for the process of physical ascension that the entire planet will experience in the near future. Fourth Density Relationships - New Models - Spirit Web. Lyssa Royal Light Technology's Sunday Night Salon, June 21, 1992 Germane is a group consciousness energy, states that "his" orientation is from a realm of integration that does not have a clear-cut density/dimensional levels. 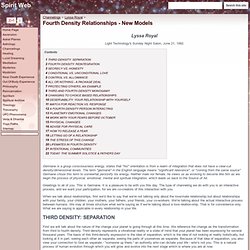 The term "germane" in the English language means "significant relevance", or "coming from the same source". Germane chose this term to somewhat personify his energy. Neither male nor female, he views us as evolving to become like him as we begin the process of physical, emotional, mental and spiritual integration, which leads us back to the Source of All. Wake Up for Ascension to a New Earth - Or Leave - Robert E. Pettit. The Law of One Category Densities. Version (?) 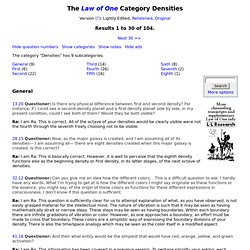 : Lightly Edited, Relistened, Original Hide question numbers Show categories Show notes Hide ads The category “Densities” has 9 subcategories. General 13.20 Questioner: Is there any physical difference between first and second density? Ra: I am Ra. 28.15 Questioner: Now, as the major galaxy is created, and I am assuming all of its densities— I am assuming all— there are eight densities created when this major galaxy is created. Ra: I am Ra. 32.12 Questioner: Can you give me an idea how the different colors… This is a difficult question to ask.

Ra: I am Ra. 41.16 Questioner: And then what entity would be the simplest that would have red, orange, yellow, and green activation? Density/Dimension Scale. As described in the book "Prism of Lyra" by Lyssa Royal. 7th Density Awareness as the multidimensional experience, group-matrix identity, (social memory complex). 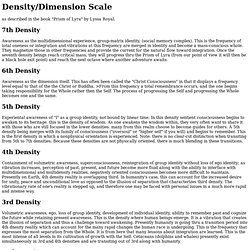 This is the frequency of total oneness or integration and vibrations at this frequency are merged in identity and become a mass-conscious whole. They magnetize those in other frequencies and provide the current for the natural flow toward integration. Ascension For All by Owen K Waters. 4th Density Earth Is Allowing Us To Put Relationships and Judgment Into Perspective. By Michael Forrester December 14, 2011 from PreventDisease Website Spanish version The end of December and beginning of January will mark further increases in solar activity where our own human energy fields will be affected far more than our electrical grids. 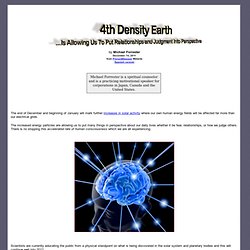 The increased energy particles are allowing us to put many things in perspective about our daily lives whether it be fear, relationships, or how we judge others. Scientists are currently educating the public from a physical standpoint on what is being discovered in the solar system and planetary bodies and this will continue well into 2012. It is important to note that although there is a chance of solar flares causing devastation to electrical grids on earth, mass consciousness appears to be counteracting this reality, so it will likely not occur on earth's current timeline. We are constantly receiving upgrades to our current belief systems, collective consciousness and earth's true history from solar activity. 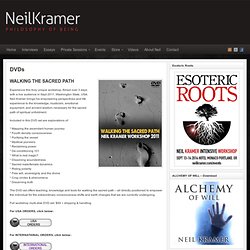 Densities. From Cassiopedia Website Density In the Cassiopaea and Ra materials, density denotes a qualitatively distinct level of being. 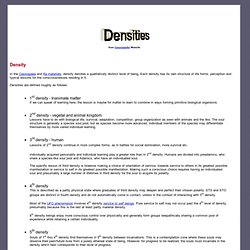 Each density has its own structure of life forms, perception and typical lessons for the consciousnesses residing in it. Densities are defined roughly as follows: An Explanation of Dimensions of Consciousness, Density Levels of Reality and a View on what is happening on Earth. People need to make a difference between Dimension and Density, it shouldn`t always be called just 3D, 4D, 5D etc... Humanity and earth is living in the THIRD DENSITY. 3D to 4D Relationships - From separation to integration. As the human race steps into the Age of Aquarius, our consciousness is transforming from the third density level to the fourth density level. One of the characteristics of third density is separation, whether it be separation from the God-Source, from each other, or separating aspects of ourselves within ourselves.

This idea of separation has been necessary in third density to keep us in the third density experience that we have all chosen. As we move from the 3D into the 4D reality, we are moving from separation to integration. Therefore, the operating premise that we have had in 3D reality (based on separation) can no longer operate successfully in 4D. What we are feeling in our own growth (whether it be relationships with lovers, family, friends or ourselves) is almost a sense of urgency about letting go of certain beliefs and perspectives that we have carried for quite some time.