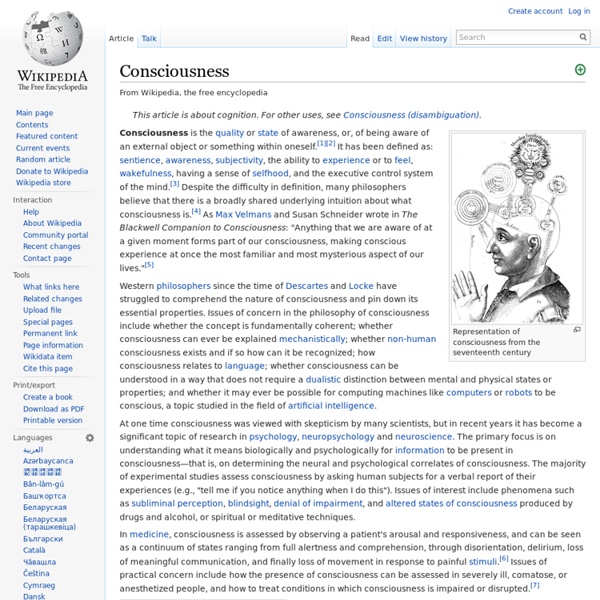 Representation of consciousness from the seventeenth century At one time consciousness was viewed with skepticism by many scientists, but in recent years it has become a significant topic of research in psychology, neuropsychology and neuroscience. The primary focus is on understanding what it means biologically and psychologically for information to be present in consciousness—that is, on determining the neural and psychological correlates of consciousness. The majority of experimental studies assess consciousness by asking human subjects for a verbal report of their experiences (e.g., "tell me if you notice anything when I do this"). Issues of interest include phenomena such as subliminal perception, blindsight, denial of impairment, and altered states of consciousness produced by drugs and alcohol, or spiritual or meditative techniques. Etymology and early history[edit] John Locke, British philosopher active in the 17th century In the dictionary[edit] Philosophy of mind[edit]

Choiceless awareness Choiceless awareness is posited in philosophy, psychology, and spirituality to be the state of unpremeditated, complete awareness of the present without preference, effort, or compulsion. The term was popularized in mid-20th-century by Jiddu Krishnamurti, in whose philosophy it signifies a main theme. Similar or related concepts had been previously developed in several religious or spiritual traditions; the term or others like it has also been used to describe traditional and contemporary secular and religious meditation practices. However, Krishnamurti's approach to choiceless awareness was unique and differs from both prior and later notions.

The Nature of Consciousness: How the Internet Could Learn to Feel - Steve Paulson "Romantic reductionist" neuroscientist Christof Koch discusses the scientific side of consciousness, including the notion that all matter is, to varying degrees, sentient. If you had to list the hardest problems in science -- the questions even some scientists say are insoluble -- you would probably end up with two: Where do the laws of physics come from? How does the physical stuff in our brains produce conscious experience? Even though philosophers have obsessed over the "mind-body problem" for centuries, the mystery of consciousness wasn't considered a proper scientific question until two or three decades ago. Then, a couple of things happened.

Consciousness 1. History of the issue Questions about the nature of conscious awareness have likely been asked for as long as there have been humans. Neolithic burial practices appear to express spiritual beliefs and provide early evidence for at least minimally reflective thought about the nature of human consciousness (Pearson 1999, Clark and Riel-Salvatore 2001). Preliterate cultures have similarly been found invariably to embrace some form of spiritual or at least animist view that indicates a degree of reflection about the nature of conscious awareness. Nonetheless, some have argued that consciousness as we know it today is a relatively recent historical development that arose sometime after the Homeric era (Jaynes 1974). Table of contents (With last update date) Cover Foreword (August 13, 2009) Part 1. Quantum theory and consciousness Preface to part 1 (April 12, 2000)

Awareness Concept[edit] Awareness is a relative concept. An animal may be partially aware, may be subconsciously aware, or may be acutely unaware of an event. Love Will Change Your Life There are higher vibrations as joy, peace, and empowerment based in love and light in the highest vibrations. Negative thinking offers lower emotions and positive ideas produce higher emotions. Are you ready to move into enjoying your life? This awakening offers the idea that fears should not control your life. Choosing to replace fear with love is a viable solution. Web resources on consciousness, philosophy, and such Web resources related to consciousness, philosophy, and such. Compiled by David Chalmers Here are a small number of high-quality academic resources on the web that I find useful or interesting. The emphasis is on sites containing real intellectual content. See also my lists of people with online papers in philosophy and of online papers on consciousness. Consciousness resources

Naturally Fermented Dill Pickles Welcome! If you want to lose weight, gain muscle, increase energy levels or just generally look and feel healthier you've come to the right place. Here's where to start: Visit the Start Here and Primal Blueprint 101 pages to learn more about the Primal Lifestyle. Subscribe to my free weekly newsletter to receive 10 eBooks, a 7-Day Course of Primal Fundamentals, and more - all for free. Cut to the chase by visiting PrimalBlueprint.com. Integral theory consciousness Ken Wilber Journal of Consciousness Studies, 4 (1), February 1997, pp. 71-92 Copyright, 1997, Imprint Academic Abstract: An extensive data search among various types of developmental and evolutionary sequences yielded a `four quadrant' model of consciousness and its development (the four quadrants being intentional, behavioural, cultural, and social). Each of these dimensions was found to unfold in a sequence of at least a dozen major stages or levels. Combining the four quadrants with the dozen or so major levels in each quadrant yields an integral theory of consciousness that is quite comprehensive in its nature and scope. This model is used to indicate how a general synthesis and integration of twelve of the most influential schools of consciousness studies can be effected, and to highlight some of the most significant areas of future research.

A voyage through the multiverse and higher dimensional hyperspac "Remarkable claims require remarkable proof." -- Carl Sagan The "multiverse" idea—once thought to be so crazy it only belonged on late night television—has now become the dominant theory in all of cosmology. The idea now dominates conversations in science circles and it seems you cannot avoid the theory of the multiverse. Einstein first gave us the idea that the universe is a soap bubble of some sort and we reside on the skin of this expanding bubble.

Higher consciousness Higher consciousness is the consciousness of a higher Self, transcendental reality, or God. It is "the part of the human being that is capable of transcending animal instincts". The concept developed in German Idealism, and is a central notion in contemporary popular spirituality. Philosophy[edit] How to Make Sauerkraut: The Basics Making your own sauerkraut or "raw cultured vegetables" is a great skill to have if you’ve adopted this fermented food as a frequently eaten condiment. Here we will share two delicious beginner recipes for those of you, like us, who prefer the benefits of homemade versions over store bought varieties. Although the idea of making your own from scratch might seem a little intimidating at first, we are here to guide you through what is really a very simple process. The great part is that you don’t need to go out and buy a bunch of special tools or equipment. A basic quart size glass jar and food processor is all you need to successfully make and pack your ingredients. Alternatively, you can also grate and chop your cabbage and vegetables if you don’t happen to own a food processor.

Online papers on consciousness Search tips There are three kinds of search you can perform: All fields This mode searches for entries containing all the entered words in their title, author, date, comment field, or in any of many other fields showing on OPC pages. Surname This mode searches for entries containing the text string you entered in their author field. How does consciousness work A couple of days ago I was reminded that there was another big question to be answered. The first big question is scattered throughout this blog. It boils down to a theory of everything. I am leaning towards M-Theory.