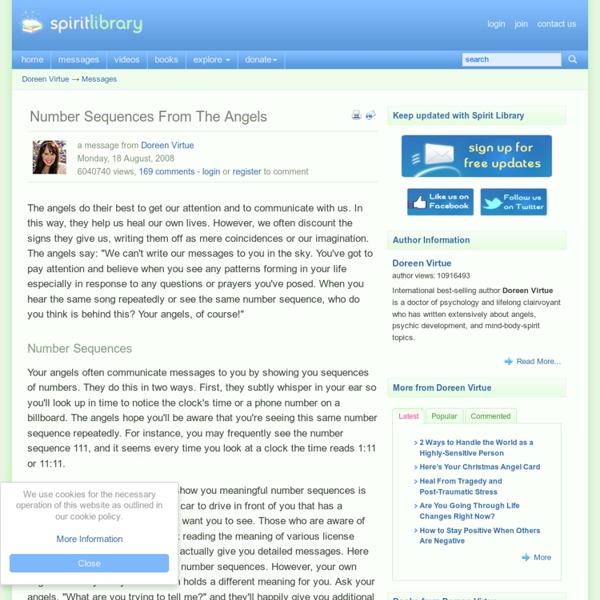 The angels do their best to get our attention and to communicate with us. In this way, they help us heal our own lives. However, we often discount the signs they give us, writing them off as mere coincidences or our imagination. The angels say: "We can't write our messages to you in the sky. You've got to pay attention and believe when you see any patterns forming in your life especially in response to any questions or prayers you've posed. When you hear the same song repeatedly or see the same number sequence, who do you think is behind this? Number Sequences Your angels often communicate messages to you by showing you sequences of numbers. The second way in which angels show you meaningful number sequences is by physically arranging for, say, a car to drive in front of you that has a specific license plate number they want you to see. 111 - Monitor your thoughts carefully, and be sure to only think about what you want, not what you don't want. 555 - Buckle your seatbelts.

Gregg Braden - The Power Of Your Subconscious Mind in5d.com “Whatever we plant in our subconscious mind and nourish with repetition and emotion will one day become a reality.” ~ Earl Nightingale The subconscious mind is the store room with an unlimited capacity; all your memories, past experiences, deepest beliefs, everything that has ever happened to you is permanently stored. In simple terms, the subconscious is a part of you that is outside of your conscious awareness, that creates automatic programs to make functioning easier in life, without having to pay attention on everything you are doing. Like driving a car, a beginner who is still learning to drive would be completely focused on driving, without engaging in a conversation with anybody in the car.

Spirit Walk Ministry - Nature Spirits The groves were God's first temples. ~William Cullen Bryant~ The Spiritual Properties of Trees Incantation for Skill You will need the following items for this spell:3 Fresh Oak Leaves 5 White Candles An Incantation for Skill in the desired arts. SKILL is best achieved by an invocation that speaks directly to the spirit of the desired art. The arts are themselves named after the spirits and so are addressed in the name of the art. Three fresh leaves of an oak should be placed on a table and surrounded then by the placement of five lighted candles so as to form the five points of a pentacle.

Fifth-Dimensional Awareness Updated November 26, 2014 by in5d Alternative News * Click HERE to visit our Official Facebook page and be sure to "Like" us!!! (opens in a new window) * Also visit in5D Connection where you can find your soul mate or join one of our amazing groups. EVERYONE is welcome! by Julie It was not too long ago that scientists spoke about space and time as two separate things. Mithra - The Pagan Christ by Acharya S/D.M. Murdock updated on November 2010 from TruthBeKnown Website Mithra with Sun and Moon "Both Mithras and Christ were described variously as 'the Way,' 'the Truth,' 'the Light,' 'the Life,' 'the Word,' 'the Son of God,' 'the Good Shepherd.' The Christian litany to Jesus could easily be an allegorical litany to the sun-god.

Nassim Haramein at the Rogue Valley Metaphysical Library * Visit in5D Connection where you can find your soul mate or join one of our amazing groups. EVERYONE is welcome! Basically, Nassim believes everything boils down to a tetrahedron and the singularity. Personally, I never felt comfortable with religion until Nassim explained it. Eckhart Tolle Describes Two Simple Exercises To Help You Live In The Now Spiritual teacher Eckhart Tolle believes in the practice of staying present. The author of A New Earth and The Power of Now acknowledges the challenge of this effort in the fast-paced culture of today, but also offers two shockingly simple exercises that anyone can do to truly live in the now -- anywhere, at any time. During the television debut of "Oprah and Eckhart Tolle: A New Earth," a 10-part series presented by "Super Soul Sunday," Tolle explains how people can condition themselves to slow down and appreciate the present. It all begins with one question.

judgement. . . . . .The Hall of Maat is where the judgment of the dead was performed. This was done by weighing one's heart (conscience) against the feather of Maat (truth and justice). The heart must not be heavier then the feather of Maat. This was not a physical weighing of the organ by living Egyptians, it was a ceremony that took place in the afterlife and was performed by the gods. Here we see Anubis leading Hunefer to the scales of Maat. Anubis weights Hunefer's heart against the feather to see if he is worthy of joining the gods in the Fields of Peace.

What Really is Self-Realisation?...and How Can it Help You Drink the Juice of Life? 23rd January 2015 By Open Contributing Writer for Wake Up World We read about ‘self-realisation’ in spiritual circles, but what really does that mean? The Egyptian Book of the Dead Index Sacred Texts Egypt The Papyrus of Ani by Imagination: The Telescope of Consciousness Imagination: The Telescope of Consciousness The role of imagination and why it is underutilized. In a world of utter separation and disillusionment, it can be a very difficult task to imagine how we, the human race, could ever become unified through the expression of love as our primary behavior.

Old Testament The Old Testament is the first section of the Christian Bible, based primarily upon the Hebrew Bible, a collection of religious writings by ancient Israelites. It is the counterpart to the New Testament, the Christian Bible's second section. The Old Testament canon varies between Christian denominations; Protestants accept only the books found in the canon of the Hebrew Bible, dividing them into 39 books, while Catholic, Eastern Orthodox, and Oriental Orthodox churches accept somewhat larger collections of writings.

Just Take a Breath By John Holland You have access to an incredible resource that’s available 24/7, and the best part is, it’s absolutely free! Used to its full potential, it can have a significant and positive affect on your well-being. New Testament The New Testament (Koine Greek: Ἡ Καινὴ Διαθήκη, Hē Kainḕ Diathḗkē) is the second major part of the Christian biblical canon, the first part being the Old Testament. Although Christians hold different views from Jews about the Old Testament, Christians regard both the Old and New Testaments together as sacred scripture. The contents of the New Testament deal explicitly with first-century Christianity.