Is This Your Brain On God? 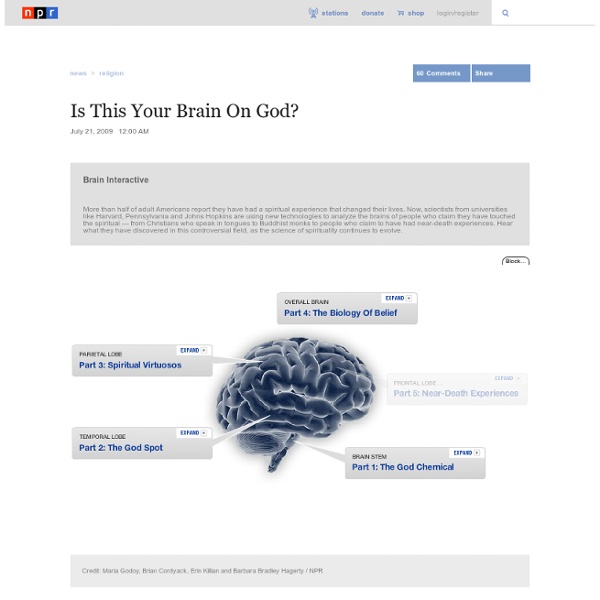 Believers' estimates of God's beliefs are more egocentric than estimates of other people's beliefs Another Atheist - Generic Answer: Learn What A Scientific Theory Is! - Generic Answer: Learn What A Scientific Theory Is! God Hates Sinners! - This site is a poe The Atheist Dawn Unfollowing Jesus - Poking Fun At Religion With A Really Big Stick Why Atheism? Just about everyone is an atheist when it comes to other gods — the gods that other people believe in or that nobody believes in anymore. I’m an atheist about all gods because there's no reliable evidence for any god, or even for Jesus. There is also extensive evidence that Jesus and all gods are fictional characters — myths created mainly by people who had little understanding of how our universe operates. We all like myths and other stories, but we don't have to believe them. Let’s start with a quick experiment. Drop one coin and watch it fall. If you were to the release third coin, what do you think would happen? Our understanding of the world around us, and our abilities to predict what will happen are based on naturalism — the basis of science. To be explicit, modern science relies on methodological naturalism. In “Cosmos” Neil deGrasse Tyson explained the basic rules of science. Dr. OK, let’s do another experiment. Galileo and Empirical Science Why God(s)? Why am I doing this? Dr.

I Think Therefore I am an Atheist | Atheist Foundation of Australia Inc This heading is a compilation of the words of René Descartes and my partner Lee. A mixture of aged wisdom and contemporary thought that goes very well together indeed. René of course meant that because he can think, he therefore must exist to be able to do so. Lee goes a little further, stating that the end result of rational thinking has to conclude that the existence of a god is only an unproven and unprovable concept. Put very simply, that is what all supernatural notions are. They are conceived in the minds of adults because we have an innate ability to do so, and then the minds of the young are indoctrinated in endless generational repetition. The critical thinking that is required to conclude there is no God is remarkably simple. If one presumes we are special creatures of a creator, that assumption implicitly places us hierarchically above other animal species with separation from them. All creatures specialize in some way to maximise survival.

Logical Fallacies and How to Spot Them Logical Fallacies and How to Spot Them In the Evolution vs. Creationism debate, it is important to be able to spot all the logical fallacies that Creationists tend to throw around. THE STRAWMAN ATTACK: The strawman is, perhaps, the most heavily-employed tactic used by Creationists. "Evolution is a ridiculous theory! This is an example of a strawman attack. Spotting a strawman attack isn't that hard. Strawman attacks, once exposed for what they are, are not all that difficult to counter. THE FALSE DILEMMA FALLACY: The false dilemma is at the heart of the Creationist argument. "There are only two solutions for the question of how the Universe was created: the Big Bang, which says that the Universe was formed out of nothing from random chance, or Biblical Creation, which gives us a loving, awesome, caring God who wants us to... Obviously, Creationists love the false dilemma because it makes any hole they find in Evolutionary Theory an automatic proof of Biblical Creation. No logic.