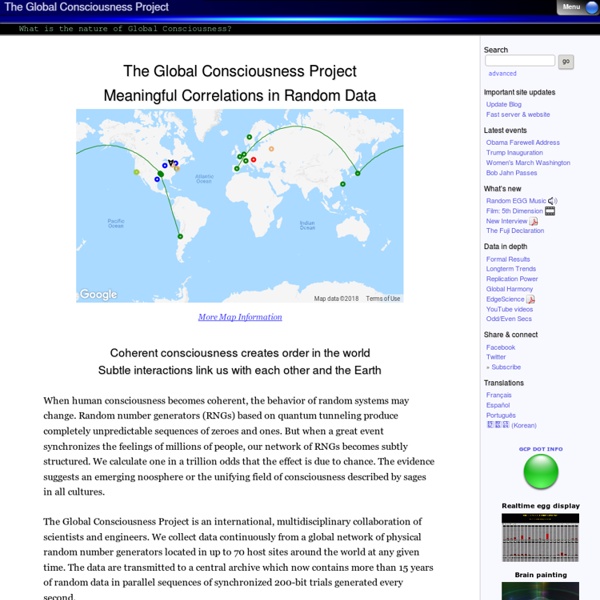 When human consciousness becomes coherent, the behavior of random systems may change. Random number generators (RNGs) based on quantum tunneling produce completely unpredictable sequences of zeroes and ones. But when a great event synchronizes the feelings of millions of people, our network of RNGs becomes subtly structured. We calculate one in a trillion odds that the effect is due to chance. The evidence suggests an emerging noosphere or the unifying field of consciousness described by sages in all cultures. The Global Consciousness Project is an international, multidisciplinary collaboration of scientists and engineers.

Australia The Radiation Network is potentially global, and we now have some Monitoring Stations reporting intermittently from Australia, and an intermittent station from neighboring Bali, in Indonesia. = Nuclear Site Alert Level = 3 consecutive minutes of lesser of 100 CPM or 2.5 times a Station's baseline *Readings not Equalized means the Monitoring Stations are broadcasting the raw radiation count from their Geiger counters, without adjustment for different count rates existing between various Geiger counter designs. For instance, models built around a "Pancake" (see Map Legend) style of Geiger-Mueller tube typically have a 3 times count rate over Standard tubed models.

Is Revitalizing A Neighborhood What’s most striking when you enter the brick bunker formerly known as Stock House No. 3 is the green, says Fred Haberman, a cofounder and partner in Urban Organics, a futuristic farm housed inside a long-vacant structure on the former site of Hamm’s Brewery in East St. Paul. "It’s mind-boggling to come into this old building and see so much greenery," he says. "The colors are almost electric. Looking at this kale planted two weeks ago, you’d be shocked at how quickly it’s grown." The "secret sauce" for growing that electric-green kale, chard, and leafy herbs is the nutrient-rich wastewater pumped from four 3,500-gallons tanks of tilapia, which flows through a system of pipes and filters to irrigate and fertilize the plants before returning, clean, to the fish.

The Royal Institution Create a wine glass orchestra in your kitchen and explore how sound is caused by vibrations. For more ideas, and to download an info sheet click here: Marieke and Tilly experiment with making music and doing science experiments at home. Using wine glasses filled with different volumes of liquids, they investigate how sounds are caused by vibrations and how changing the volume of liquid affects the pitch of the note. Simply rubbing your fingers around the rim of a glass can make an amazing noise. Global Consciousness Project The Global Consciousness Project (GCP, also called the EGG Project) is a parapsychology experiment begun in 1998 as an attempt to detect possible interactions of "global consciousness" with physical systems. The project monitors a geographically distributed network of hardware random number generators in a bid to identify anomalous outputs that correlate with widespread emotional responses to sets of world events, or periods of focused attention by large numbers of people.[1][non-primary source needed] The GCP is privately funded through the Institute of Noetic Sciences[2][non-primary source needed] and describes itself as an international collaboration of about 100 research scientists and engineers. Skeptics such as Robert T. Background[edit] Roger D. In an extension of the laboratory research called FieldREG, investigators examined the outputs of REGs in the field, before, during and after highly focused or coherent group events.

Demand for Cars with WiFi to Increase 40 Times by 2017 By Chuong Nguyen on 11/29/2010 iSuppli is forecasting that demand for cars with built-in WiFi will increase to 7.2 million vehicles in 2017, a 40-time increase from today’s 174,000 connected cars. Though integrated WiFi may provide a more limited role in getting road warriors mobile broadband access than an integrated 3G modem, auto-makers are relying on WiFi as a means of connectivity that’s low cost and may not deter budget-conscious consumers from balking at high data costs or long-term contracts in new “smartcars.” Right now, Ford’s Sync system uses a similar WiFi approach, but can enable mobile broadband and serve as a mobile MiFi-like device when a 3G USB modem dongle is plugged into the Sync system. This may be more beneficial to users as they can take their mobile broadband connection with them when they leave the car and not have to purchase another device or rely on another plan for data.

Europe Our network currently has a few Monitoring Stations in Europe. Keep your eye open for Yellow circles in Iceland, the Netherlands, Spain, Italy, and some intermittent stations reporting from Switzerland and Germany. = Nuclear Site Alert Level = 3 consecutive minutes of lesser of 100 CPM or 2.5 times a Station's baseline Urban Organics-Haberman Transforming the food system and strengthening local communities. Haberman believes in the pioneering spirit so much that sometimes we just have to take the plunge ourselves. At a new organic urban farm in St. Paul, we’re quite literally diving in because this farm doesn’t use dirt. It’s all about water. Aquaponics, to be exact. British Science Association The British Science Festival is Europe’s longest standing science Festival, traveling to a different place in the United Kingdom each year. Our Festival aims to connect people with scientists, engineers, technologists and social scientists. Each year, we bring an inspiring programme of free events to the public over four or five days, bursting with exciting opportunities to get involved in. Our talks, workshops and drop-in events span a diverse range of subjects that encompass science in the broadest sense, promising something for everyone! In 2017, the Festival came to Brighton which buzzed with science enthusiasm as we, with our co-hosts University of Sussex and University of Brighton, bought over 200 free events to the city.

Nanotube-Tethered Flying Wind Turbines Could Harvest Energy At 30,000 Feet Future airborne wind turbines could spin with greater gusto in the faster winds found at high altitudes, and send power back to Earth via nanotube tether cables. Swarms of energy-harvesting kites, whirling blimps or balloons could stay aloft for a year, and could be reeled in during storms or for maintenance. This vision, outlined by a researcher at NASA, recently sparked the first federally funded research effort into airborne wind farms.

Detail Maps This page is devoted to detailed maps for regions of particular interest. Many have asked that overlapping stations be "spread apart", so this is how we are doing that. = Nuclear Site Alert Level = 3 consecutive minutes of lesser of 100 CPM or 2.5 times a Station's baseline *Readings not Equalized means the Monitoring Stations are broadcasting the raw radiation count from their Geiger counters, without adjustment for different count rates existing between various Geiger counter designs. For instance, models built around a "Pancake" (see Map Legend) style of Geiger-Mueller tube typically have a 3 times count rate over Standard tubed models. Southwest

Report Vol. 3 - 2014 - Circular Economy Reports Report Vol. 3 - 2014 About the Report Business leaders and governments alike acknowledge that continued wealth generation requires a new industrial model that is less dependent on primary energy and materials inputs. In its previous reports, the Ellen MacArthur Foundation has focused on the economic and business benefits of such a circular model of development. A collaboration between the World Economic Forum, the Ellen MacArthur Foundation and McKinsey & Company, this new report aims to reconcile the goal of scaling a circular model with the reality of a global economy and complex multi-tier supply chains. The key objective is to propose a very specific joint plan of action for industry leaders.

Top 10 Universities With Free Courses Online #1 UC Berkeley Ranked as the #1 public school in the United States, Berkeley offers podcasts and webcasts of amazing professors lecturing. Each course has an RSS feed so you can track each new lecture. For printable assignments and notes you can check the professors homepage, which is usually given in the first lecture or google his name. Even though the notes, homework and tests are not directly printed in the berkeley website, as they are in MIT and other courseware sites, it's not a problem to find them. I personally tried to use it for John Wawrzynek's machine structures class and the nutrition courses.