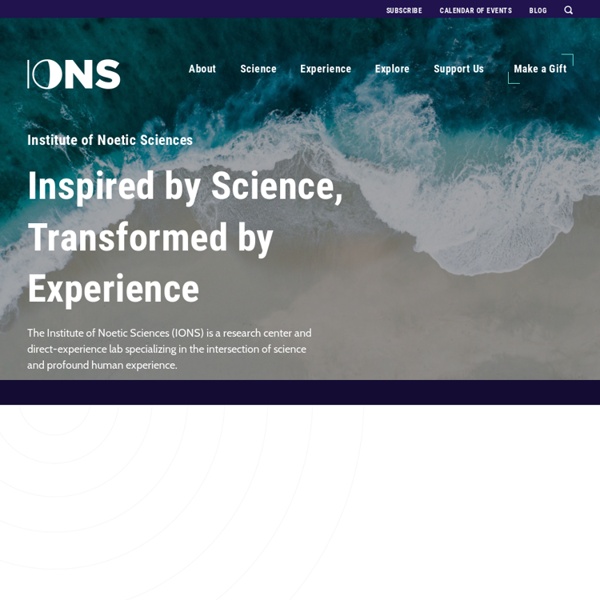 Analysis predicts extremely disruptive, total transition to EV / autonomous vehicles in 13 years (Tech Xplore)—RethinkX, an independent think tank that analyzes and forecasts disruptive technologies, has released an astonishing report predicting a far more rapid transition to EV/autonomous vehicles than experts are currently predicting. The report is based on an analysis of the so-called technology-adoption S-curve that describes the rapid uptake of truly disruptive technologies like smartphones and the internet. Additionally, the report addresses in detail the massive economic implications of this prediction across various sectors, including energy, transportation and manufacturing.

Publications - Journals by Subject Ocean Science (OS) is an international open access journal dedicated to the publication and discussion of research on all aspects of ocean science, experimental, theoretical and laboratory. OS covers the fields ocean physics, ocean chemistry, biological oceanography, air-sea interactions, ocean models (physical, chemical, biological and biochemical), coastal and shelf edge processes, and paleoceanography. Aims & Scope | Editorial Board | Online Library OS | Online Library OSD Connecting the science of mind, brain, and spirit with perspectives from the Institute of Noetic Sciences. As the legendary philosopher John Locke once said: “New opinions are always suspected, and usually opposed, without any other reason but because they are not already common.” What limits our desire and capacity to take in new ideas – even when we hold an intention to transform and grow? How can we shift a paradigm that we see as flawed and incomplete without understanding the barriers to changing our minds and behaviors? And how can we develop habits that allow us to explore and reveal our own biases and intolerance of ideas that refute our prevailing beliefs and opinions? These are tricky questions, but ones that are lighting up many science labs around the world. New discoveries and new thinking in neuroscience, social psychology, and anthropology offer provocative insights into the barriers to transformation.

MACH: The best and latest in Tech & Innovation Dominic Hogdson / Sentinel-2/ESA Environment Iceberg's break from Antarctic ice shelf is 'geologically imminent' Scientists are eyeing a huge crack in the ice that has grown more than 650 feet in the past month. Journals PLOS publishes seven peer-reviewed open-access journals. The journals vary in their selectivity and contain differing amounts of commentary articles from opinion leaders in a variety of scientific disciplines.The journals are editorially independent. They include PLOS ONE, which publishes all rigorous science across the full range of life and health sciences; the community journals (PLOS Genetics, PLOS Computational Biology, PLOS Pathogens, and PLOS Neglected Tropical Diseases); and our flagship journals, PLOS Medicine and PLOS Biology, highly selective journals publishing fewer than 10% of submissions along with a range of informative and influential non-research content. You can search the journals for specific articles here and you can sign up for e-mail Content Alerts for all our journals here. We encourage authors to consider carefully each journal’s scope before submission in order to minimize delays in the review process. PLOS Biology

Could humans be Earth's second civilization? “How do you know we’re the only time there’s been a civilization on our own planet?” [said Goddard Institute for Space Studies director Gavin Schmidt]. [T]hat first conversation launched a new study we’ve recently published in the International Journal of Astrobiology. Though neither of us could see it at that moment, Gavin’s penetrating question opened a window not just onto Earth’s past, but also onto our own future. [C]ould researchers find clear evidence that an ancient species built a relatively short-lived industrial civilization long before our own? Perhaps, for example, some early mammal rose briefly to civilization building during the Paleocene epoch about 60 million years ago.

How Friends Ruin Memory: The Social Conformity Effect Humans are storytelling machines. We don’t passively perceive the world – we tell stories about it, translating the helter-skelter of events into tidy narratives. This is often a helpful habit, helping us make sense of mistakes, consider counterfactuals and extract a sense of meaning from the randomness of life. But our love of stories comes with a serious side-effect: like all good narrators, we tend to forsake the facts when they interfere with the plot. We’re so addicted to the anecdote that we let the truth slip away until, eventually, those stories we tell again and again become exercises in pure fiction. Just the other day I learned that one of my cherished childhood tales – the time my older brother put hot peppers in my Chinese food while I was in the bathroom, thus scorching my young tongue – actually happened to my little sister.

Synthetic Biology "Synthetic biology" is an umbrella term that refers to a new set of powerful techniques for manipulating the fundamental molecular structures of life, including genes, genomes, cells and proteins. Techniques being developed under the "synthetic biology" rubric include the modification of existing bacteria to produce useful substances or perform new functions, the creation of novel artificial organisms from "scratch," and — less noted to date — the modification of animal and human genes. Synthetic biologists foresee a host of human applications, including new methods to produce drugs, biofuels and vaccines; to diagnose, prevent and cure disease; and — far more controversially — to screen, select, and modify genes for specified traits in embryos, children, and adults. Nonetheless, the field remains in its early days, and separating hype from real potential remains difficult.

Green R&D - Hypergiant Algae is a single-celled organism that is capable of multiplying rapidly through the absorption of sunlight and carbon dioxide. It is considered one of nature’s most efficient machines. Algae can be grown nearly anywhere and it requires very few nutrients to survive. It is high in proteins, lipids, and starches, making it suitable for a variety of uses, including as food. The Hypergiant Eos Bioreactor uses algae, specifically Chlorella Vulgaris which is capable of pulling CO2 from the atmosphere at a much higher rate than any other plant.

The Psychology of Nakedness Editor’s Note: Portions of this story in italics below were found to come from LiveScience. The human mind sees minds everywhere. Show us a collection of bouncing balls and we hallucinate agency; a glance at a stuffed animal and we endow it with a mood; I’m convinced Siri doesn’t like me. The point is that we are constantly translating our visual perceptions into a theory of mind, as we attempt to imagine the internal states of teddy bears, microchips and perfect strangers. Most of the time, this approach works well enough. If I notice someone squinting their eyes and clenching their jaw, I automatically conclude that he must be angry; if she flexes the zygomatic major – that’s what happens during a smile – then I assume she’s happy.

Science Illustrated Meerkat Magic Some of the magic moment of filming meerkats for the BBC’s Planet Earth Live. Technology meets fashion This is what happens when fashion and technology come together — a look at the DVF Spring 2013 show through the eyes of the models, the designers and Diane von Furstenberg herself. All…

Weird things start to happen when you stare into someone's eyes for 10 minutes Giovanni Caputo recruited 20 young adults (15 women) to form pairs. Each pair sat in chairs opposite each other, one metre apart, in a large, dimly lit room. Specifically, the lighting level was 0.8 lx, which Caputo says "allowed detailed perception of the fine face traits but attenuated colour perception." The participants' task was simply to stare into each other's eyes for 10 minutes, all the while maintaining a neutral facial expression. A control group of a further 20 participants also sat in a dimly lit room in pairs, but their chairs faced the wall and they stared at the wall. What is this thing called science? As a scientist, Evelyn Fox Keller hated experiments. Today a professor emerita in the History of Science at MIT, she started out her scientific career in theoretical physics before jumping to molecular biology. What got her was the trivial volatility inherent in experimentation. “Someone could brush by the thermostat on the water bath, and a months’ work would be down the drain.