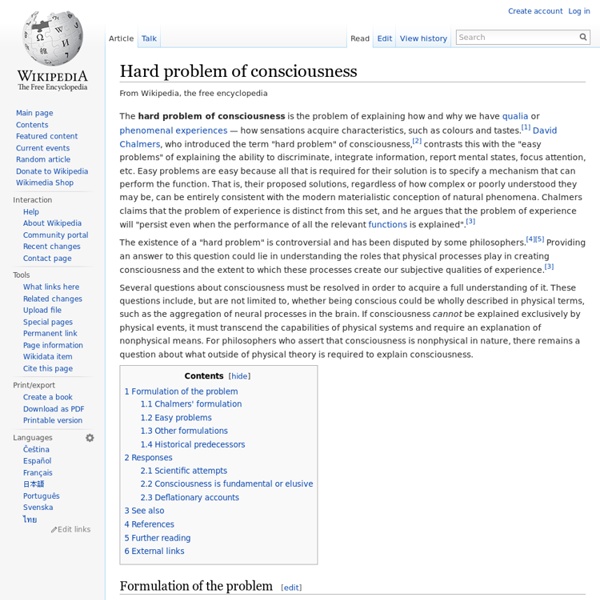 The existence of a "hard problem" is controversial and has been disputed by some philosophers.[4][5] Providing an answer to this question could lie in understanding the roles that physical processes play in creating consciousness and the extent to which these processes create our subjective qualities of experience.[3] Several questions about consciousness must be resolved in order to acquire a full understanding of it. These questions include, but are not limited to, whether being conscious could be wholly described in physical terms, such as the aggregation of neural processes in the brain. If consciousness cannot be explained exclusively by physical events, it must transcend the capabilities of physical systems and require an explanation of nonphysical means. For philosophers who assert that consciousness is nonphysical in nature, there remains a question about what outside of physical theory is required to explain consciousness. Formulation of the problem[edit] Easy problems[edit] T.H. Related:  Wisdom

Lego Serious Play at CERN, Challenge Based innovation CBi is the latest iteration of an evolving experiment at CERN in Geneva. The CBi acronym stands for “Challenge Based innovation”, and the experiment pulls in students from several countries and multiple disciplines. The Scimpulse Foundation collaborates with CERN since 2013 and in this occasion we facilitate a concept design workshop. It’s a sunny September morning in Mayrin, the outskirts of Geneva, right on the side of the ATLAS experiment building there is a new shell enclosure where a bunch of students practice and learn about innovation. Dr. Marco Manca is the coach of the team and he wants to make sure that they come out of the experience with a new mindset. The challenge is to design something that may enable blind people to perceive the surrounding environment; maybe some type of augmented sensory device. They call themselves the “Heisenberg” team. They fly through the training! what is Vision? To know how we did it, keep on reading … Let me see! Let me see!

David Chalmers David Chalmers I am a philosopher at New York University and the Australian National University. Officially I am Professor of Philosophy and co-director of the Center for Mind, Brain, and Consciousness at NYU, and also (20% time) Professor of Philosophy at ANU. I work in the philosophy of mind and in related areas of philosophy and cognitive science. I am especially interested in consciousness, but am also interested in all sorts of other issues in the philosophy of mind and language, metaphysics and epistemology, and the foundations of cognitive science. This site includes quite a bit of my own work (e.g. all of my papers), and it also includes a number of resources I've put together on topics related to consciousness and/or philosophy: e.g., MindPapers (a bibliography), directories of online papers, and some philosophical diversions. What's New: Three Puzzles About Spatial Experience, Why Isn't There More Progress in Philosophy? Background Activities Research

Data, Information, Knowledge and Wisdom From SystemsWiki by Gene Bellinger, Durval Castro, Anthony Mills There is probably no segment of activity in the world attracting as much attention at present as that of knowledge management. Yet as I entered this arena of activity I quickly found there didn't seem to be a wealth of sources that seemed to make sense in terms of defining what knowledge actually was, and how was it differentiated from data, information, and wisdom. What follows is the current level of understanding I have been able to piece together regarding data, information, knowledge, and wisdom. According to Russell Ackoff [1989], a systems theorist and professor of organizational change, the content of the human mind can be classified into five categories: Ackoff indicates that the first four categories relate to the past; they deal with what has been or what is known. A further elaboration of Ackoff's definitions follows: Data... data is raw. Ex: It is raining. Ex: It rains because it rains. Now consider the following:

Consciousness Explained Consciousness Explained is a 1991 book by the American philosopher Daniel Dennett which offers an account of how consciousness arises from interaction of physical and cognitive processes in the brain. Synopsis[edit] The book puts forward a "multiple drafts" model of consciousness, suggesting that there is no single central place (a "Cartesian Theater") where conscious experience occurs; instead there are "various events of content-fixation occurring in various places at various times in the brain".[1] The brain consists of a "bundle of semi-independent agencies";[2] when "content-fixation" takes place in one of these, its effects may propagate so that it leads to the utterance of one of the sentences that make up the story in which the central character is one's "self". Dennett's view of consciousness is that it is the apparently serial account for the brain's underlying parallelism. One of the book's more controversial claims is that qualia do not (and cannot) exist. [edit] See also[edit]

The Problem with the Data-Information-Knowledge-Wisdom Hierarchy - David Weinberger by David Weinberger | 9:00 AM February 2, 2010 The data-information-knowledge-wisdom hierarchy seemed like a really great idea when it was first proposed. But its rapid acceptance was in fact a sign of how worried we were about the real value of the information systems we had built at such great expense. What looks like a logical progression is actually a desperate cry for help. The DIKW hierarchy (as it came to be known) was brought to prominence by Russell Ackoff in his address accepting the presidency of the International Society for General Systems Research in 1989. Where is the Life we have lost in living? Those lines come from the poem “The Rock” by T.S. The DIKW sequence made immediate sense because it extends what every Computer Science 101 class learns: information is a refinement of mere data. But, the info-to-knowledge move is far more problematic than the data-to-info one. So, what is “knowledge” in the DIKW pyramid? And humbug.

Cartesian theater Objects experienced are represented within the mind of the observer The Cartesian theater is a derisive term coined by philosopher and cognitive scientist Daniel Dennett to pointedly refer to a defining aspect of what he calls Cartesian materialism, which he considers to be the often unacknowledged remnants of Cartesian dualism in modern materialistic theories of the mind. Descartes originally claimed that consciousness requires an immaterial soul, which interacts with the body via the pineal gland of the brain. The term Cartesian Theater was brought up in the context of the Multiple Drafts Model that Dennett posits in Consciousness Explained (1991): Cartesian materialism is the view that there is a crucial finish line or boundary somewhere in the brain, marking a place where the order of arrival equals the order of "presentation" in experience because what happens there is what you are conscious of. [...] See also[edit] References[edit] External links[edit]

Metacognition: The Gift That Keeps Giving Editor's note: This post is co-authored by Marcus Conyers who, with Donna Wilson, is co-developer of the M.S. and Ed.S. Brain-Based Teaching degree programs at Nova Southeastern University. They have written several books, including Five Big Ideas for Effective Teaching: Connecting Mind, Brain, and Education Research to Classroom Practice. Students who succeed academically often rely on being able to think effectively and independently in order to take charge of their learning. These students have mastered fundamental but crucial skills such as keeping their workspace organized, completing tasks on schedule, making a plan for learning, monitoring their learning path, and recognizing when it might be useful to change course. Many teachers we know enjoy teaching students how to wield one of the most powerful thinking tools: metacognition, or the ability to think about your thoughts with the aim of improving learning. Metacognition in the Brain How to Teach Students to Be More Metacognitive