The revival of an ancient science 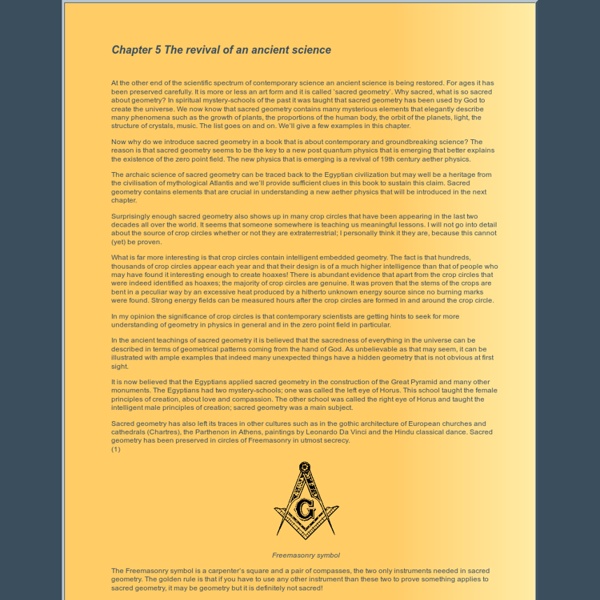 At the other end of the scientific spectrum of contemporary science an ancient science is being restored. For ages it has been preserved carefully. It is more or less an art form and it is called ‘sacred geometry’. Why sacred, what is so sacred about geometry? In spiritual mystery-schools of the past it was taught that sacred geometry has been used by God to create the universe. We now know that sacred geometry contains many mysterious elements that elegantly describe many phenomena such as the growth of plants, the proportions of the human body, the orbit of the planets, light, the structure of crystals, music. Now why do we introduce sacred geometry in a book that is about contemporary and groundbreaking science? The archaic science of sacred geometry can be traced back to the Egyptian civilization but may well be a heritage from the civilisation of mythological Atlantis and we’ll provide sufficient clues in this book to sustain this claim. It is called the genesis pattern. Torus

Spirit Into Matter — The Geometry of Life When I was a teenager, my deep concern about the global threat of nuclear annihilation set me on a life-long quest to understand the nature of energy and how we can relate to it harmoniously instead of violently. Many find it beautiful, and that is a tribute to nature and to the computer skills of Goa Lobaugh and the liquid buddha studios team as well as Robert W. Gray. Science and the Scriptures Chapter 11 Science and the Scriptures While scores of theological scholars have been studying the literal meaning of biblical phrases and the historical facts mentioned therein, leading to an endless stream of interpretations, scientists have studied the scriptures and discovered scientific hidden meaning within them. Along with our rapid scientific evolution, our understanding of ancient scriptures such as the Vedas and the Upanishads is growing. Now we’re not only rediscovering the scientific significance of Eastern spirituality but also that of the Bible! Fascinating facts about the Bible have surfaced that are often dismissed or ignored by the Roman Catholic Church because these findings do not fit in with their established dogmas.

Music and Sacred Geometry In the Brahma Samhita story written in Sanskrit the first born son of the creator god is called Narada which means Music. I take this as an acknowledgement of the importance of Music as one of, if not the, primary language and metaphor that creates existence. Music spans the gulf between the impersonal patterns of number woven into frequencies of sound and the very personal emotional response to the archetypes of embodied experience. It strikes me as interesting that it is not just being suggested that vibration is the source of existence but that it is the beautiful patterns that can be perceived within the vibrations ! Since at least the days of Pythagorus we have understood that harmony is dependent on simple numerical ratios of vibration.

The Flower of Life The flower of life holds a secret through which one can discover the most important and sacred pattern in the universe. This is the source of all that exists; it’s called the Fruit of Life. It contains 13 informational systems. Each one explains another aspect of reality. Vastu Purusa Vastu-purusa means in the present context a site-plan or a location plan. According to the Matsya Parana, the Vastu Purusa Mandala has particular deities of Vastu Purusa in respective places. The North-East (aisdnya) is said to be occupied by Mercury (budha) and Lord Vishnu. Accordingly, the place of conducting mental work and the worship chamber in a ruse is to be situated in that direction. The South-East (agrneyi) is said to be occupied by the Moon and Parvati. The Moon is said to be the controller of mind and Parvati is the symbol of mother, of mind.

The Platonic Solids and Sacred Geometry Sacred geometry is a term which describes ... The geometrical laws which create everything in existence. This term has been used by mathematicians, geometricians, spiritual seekers, anthropologists, and archaeologists to encompass the religious, philosophical, and spiritual beliefs that have sprung up around geometry in all the major cultures during the course of human history. Every thought or emotion we produce has a specific geometrical pattern.

Flower of Life Occurrences of the ornament[edit] The Flower of Life symbol drawn in red ochre Temple of Osiris at Abydos, Egypt Abydos (Egypt)[edit] Possibly five patterns resembling the Flower of Life can be seen on one of the granite columns of the Temple of Osiris in Abydos, Egypt, and a further five on a column opposite of the building. The Miracle of 528 Hz Solfeggio & Fibonacci Numbers Solfeggio tones create music to calm an overactive mind and send us towards connecting with the divine. According to Dr. Leonard Horowitz, 528 Hertz is a frequency that is central to the “musical mathematical matrix of creation.” More than any sound previously discovered, the “LOVE frequency” resonates at the heart of everything.

40 websites that will make you cleverer right now The indexed web contains an incredible 14 billion pages. But only a tiny fraction help you improve your brain power. Here are 40 of the best. whizzpast.com – Learn about our awe inspiring past all in one wonderful place.