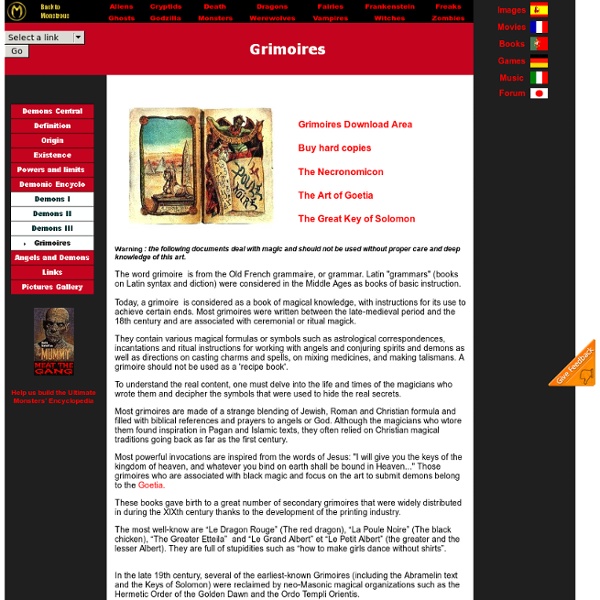 Warning : the following documents deal with magic and should not be used without proper care and deep knowledge of this art. The word grimoire is from the Old French grammaire, or grammar. Latin "grammars" (books on Latin syntax and diction) were considered in the Middle Ages as books of basic instruction. Today, a grimoire is considered as a book of magical knowledge, with instructions for its use to achieve certain ends. They contain various magical formulas or symbols such as astrological correspondences, incantations and ritual instructions for working with angels and conjuring spirits and demons as well as directions on casting charms and spells, on mixing medicines, and making talismans. To understand the real content, one must delve into the life and times of the magicians who wrote them and decipher the symbols that were used to hide the real secrets. More about the Necronomicon

Grimoire While the term grimoire is originally European and many Europeans throughout history, particularly ceremonial magicians and cunning folk, have made use of grimoires, the historian Owen Davies noted that similar books can be found all across the world, ranging from Jamaica to Sumatra,[3] and he also noted that the first grimoires could be found not in Europe but in the Ancient Near East.[4] Etymology[edit] History[edit] Ancient period[edit] "Many of those [in Ephesus] who believed [in Christianity] now came and openly confessed their evil deeds. Notwithstanding the accounts of Biblical figures like Moses, Enoch and Solomon being associated with magical practices, when Christianity became the dominant faith of the Roman Empire, the early Church frowned upon the propagation of books on magic, connecting it with paganism, and burned books of magic. Medieval period[edit] Early modern period[edit]

Internet Sacred Text Archive Home Resurrection - New Hampshire's Longest Running Goth/Industrial Club Night Esoteric Online The Divine Life Society--Free Books on Yoga, Religion and Philosophy Some of the HTML files have both Devanagari (Windows, Mac and Unix X11R6) and Romanized Sanskrit fonts (Windows only). Instructions to install the fonts can be found at Avinash Chopde's ITRANS site. Press the "Shift" key and click on a link below to download the fonts for your system: If you do not install these fonts, you will see some other characters in place of the Sanskrit fonts but the English texts are not affected. You do not need to install the fonts if you are viewing the PDF files. If you would like to be informed of titles as they become available, you can join "The Divine Life Society" e-mailing list by typing your e-mail address in the following form and clicking on the button. Thank you. *--document has sanskrit fonts. All About Hinduism "All About Hinduism" is intended to meet the needs of those who want to be introduced to the various facets of the crystal that is Hinduism. Books by Sri N.

Control of the astral body Now that Winter is firmly established in the Northern Hemis (Oceania laughs) it's time to look at activities for shut-ins. This question was originally asked back in 1977 e.v., but it has been brought up again recently. Q. How do I "switch on" my astral body? I am having problems getting out of my physical body. -- originally from UT, but lately repeated. This matter of switching on the astral body is a personal trick. I will be analytical, in as much as I have Virgo rising. I. We will look at each of these twelve problems in a bit, but first let's go over what to expect from an astral body transfer. The experience of being the in astral body can be very different at different times. FORM: The astral body may be any size. MOVEMENT: The motions of an astral body are usually like those of a partly animated cartoon. SENSES: All the senses of the physical body are potentially present, but usually only sight and kinesthesia are active. -- TSG (Bill Heidrick)

Macbeth Quotes Fair is foul, and foul is fair. --Witches, Act I, scene i Fortune, on his damned quarrel smiling, Showed like a rebel's whore. --Captain, Act I, scene ii If you can look into the seeds of time, And say which grain will grow, and which will not, Speak. --Banquo, Act I, scene iii And oftentimes, to win us to our harm, The instruments of darkness tell us truths, Win us with honest trifles, to betray's In deepest consequence. If chance will have me king, why, chance may crown me. --Macbeth, Act I, scene iii There's no art to find the mind's construction in the face. --Duncan, Act I, scene iv Nothing in his life Became him like the leaving it; he died As one that had been studied in his death, To throw away the dearest thing he ow'd, As 'twere a careless trifle. --Malcolm, Act I, scene iv Stars, hide your fires! --Macbeth, Act I, scene iv Glamis thou art, and Cawdor; and shalt be What thou art promised. --Lady Macbeth, Act I, scene v Come, you spirits That tend on mortal thoughts! What's done is done.