Secret Teachings of All Ages: The Pythagorean Theory of Music and Color 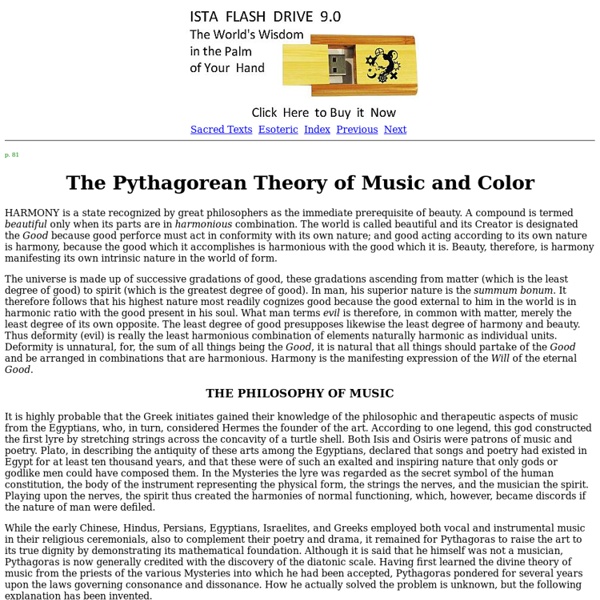 Sacred Texts Esoteric Index Previous Next p. 81 HARMONY is a state recognized by great philosophers as the immediate prerequisite of beauty. A compound is termed beautiful only when its parts are in harmonious combination. The universe is made up of successive gradations of good, these gradations ascending from matter (which is the least degree of good) to spirit (which is the greatest degree of good). It is highly probable that the Greek initiates gained their knowledge of the philosophic and therapeutic aspects of music from the Egyptians, who, in turn, considered Hermes the founder of the art. While the early Chinese, Hindus, Persians, Egyptians, Israelites, and Greeks employed both vocal and instrumental music in their religious ceremonials, also to complement their poetry and drama, it remained for Pythagoras to raise the art to its true dignity by demonstrating its mathematical foundation. Click to enlargeTHE INTERVALS AND HARMONIES OF THE SPHERES. From Fludd's De Musica Mundana. Related:  lynnylouwho • Misc.New Age

Harmony and Proportion: Pythagoras: Music and Space Pythagoras (6th century BC) observed that when the blacksmith struck his anvil, different notes were produced according to the weight of the hammer. Number (in this case amount of weight) seemed to govern musical tone... See if you can hear the sound in your imagination before it comes, by judging from the proportions of the string lengths. The first one's easy. Again, number (in this case amount of space) seemed to govern musical tone. He also discovered that if the length of the two strings are in relation to each other 2:3, the difference in pitch is called a fifth: ...and if the length of the strings are in relation to each other 3:4, then the difference is called a fourth. Thus the musical notation of the Greeks, which we have inherited can be expressed mathematically as 1:2:3:4 All this above can be summarised in the following. (Another consonance which the Greeks recognised was the octave plus a fifth, where 9:18 = 1:2, an octave, and 18:27 = 2:3, a fifth;)

Transhumanism, Freemasonry and the Internet as God By David Livingstone, author of ConspiracySchool.com Pseudoscience It could be said that transhumanism is Freemasonry for the technological age. This agenda begins with the founders of Rosicrucianism, the sorcerer John Dee and Francis Bacon, who is credited with introducing the scientific method which opened the way for the Scientific Revolution. This vision of the transformative power of science has been married to the Kabbalistic idea of progress, which is deemed to provide the basis for man’s evolution towards becoming a more “perfect” being. This—the evolution of man into superman—was always the purpose of the ancient Mysteries, and the real purpose of modern Masonry is, not the social and charitable purposes to which so much attention is paid, but the expediting of the spiritual evolution of those who aspire to perfect their own nature and transform it into a more god-like quality. Later in the book, Wilmshurst further explains: Cosmic Consciousness Arthur C. Global Mind

Pythagoras and Music of Life Pythagoras & Music of the Spheres There is geometry in the humming of the strings ... there is music in the spacing of the spheres. Pythagoras From Egypt we move across the Mediterranean Sea to the Greek island of Samos, the birthplace of Pythagoras, whose ideas dominate most of the material in this course. We'll introduce Pythagoras and his secret society of the Pythagoreans. We'll look at the Pythagoreans' ideas about numbers, as a prelude to our next unit on number symbolism. Our main link between Egypt and Greece seems to be Thales c 640-550 BC, father of Greek mathematics, astronomy, and Philosophy, and was one of the Seven Sages of Greece. Raphael's School of Athens Slide 3-1: Raphael's School of Athens 1510-11. Janson, H. Pythagoras is shown in this famous painting, done by Raphael in 1510-11, which also shows most of the Greek philosophers. Socrates sprawls on the steps at their feet, the hemlock cup nearby. Plato's student Aristotle, the man of good sense, stands next to him. 2 Dyad.

Monroe's Astral Projection (This a document that is mostly a retelling of Robert Monroe's book "Journeys Out of the Body" Aside from these techniques the book also tells his own personal experiences with Astral Projection. I highly recommend reading Monroe's book if you have even the slightest interest in OBE's. -Jay) (Taken from Leaving The Body: A Complete Guide to Astral Projection, D. Scott Rogo, prentice Hall Press) One of the chief barriers people learning to project face is fear. Once you are aware that you cannot be harmed by projecting, you should begin Monroe's techniques, step by step. Step one: Relax the body. Step two: Enter the state bordering sleep. Step three: Deepen this state. The ideal state for leaving your body is Condition D. Step Four: Enter a state of Vibration. For entering into the vibrational state, he offers the following directions: 1. 2. 3. 4. 5. 6. 7. 8. 9. 10. 11. Even if you don't know what these vibrations are, you will know when you have achieved contact with them. Step five: Step six:

Quantum Physics, Spirituality And Your Thoughts, Beliefs and Emotions Quantum Physics, Spirituality And Your Life Experience : They're Not As Different Nor as Separate As You May Currently Think And Believe. Your Thoughts, Beliefs and Emotions Shape Your World. Now You'll FINALLY Understand Why in a Very Simplified Kind of Way!! Quantum Physics once understood not only can but will open your eyes to an unseen world few are aware of as well as enable and empower you to see the importance of consciously aligning your thoughts, emotions and actions with your heartfelt desires making the term Heaven on Earth more than just a nice thought or novel idea simply because, You CAN Quantum Physics Demystifies The Process Of Creation and Reveals The Simplicity of Conscious, Intentional and Purposeful as Well as Unconscious and Unintentional Manifestation What exactly is Quantum Physics? An on the surface look of a strictly intellectual nature of what Quantum Physics is and what quantum physicists do may, and perhaps does sound a bit ho hum or really complex. How so?

The Four elements In the witches' view of the universe, all things are made up of four elements: Earth, Air, Fire, and Water. All animals, plants, stones, emotions, inanimate objects, and energies are combinations of these elements..as, of course, are we. Everything has its own unique blend of the four elements in it: everything that has substance has earth in it; everything that has energy in it has fire; everything that flows and/or has feelings has water; and everything that involves sound, thinking, or communication has air in it. We call upon the elements when we do magic, offer healing, undertake a project, cook a meal...anything where we would like to have the elements come together in perfect balance for a specified purpose. This isn't praying so much as inviting the energies of the elements to come into our space and offer their own unique gifts to the project we are working on. Many people work with "elementals." In these pages, I offer information about the correspondences of the elements.

10 Things you didn't know about sound Shh! Make your life sound better Julian Treasure: Sounds we hear have an important effect on our lives and healthNoise can cause physical harm and sound can heal, he saysHe says headphone abuse is creating deaf kidsMore research needed to fully understand how what we hear affects our health, he says Editor's note: TED is a nonprofit organization devoted to "Ideas worth spreading," which it makes available through talks posted on its website. Julian Treasure, the author of "Sound Business," is chairman of UK-based audio branding specialist The Sound Agency and an international speaker on sound's effects on people, on business and on society. (CNN) -- Most of us have become so used to suppressing noise that we don't think much about what we're hearing, or about how we listen. 1.) 2.) 3.) Video: Julian Treasure: Making life sound better 4.) Women, by contrast, typically adopt an expansive listening position, enjoying the journey, going with the flow. 5.) According to a 1999 U.S. 6.) 7. 8. 9.

The Holistic Qabala: A Practical Guide to Contemporary Magick The Abyss is another landmark described by mystics as part of the inner journey. It is a large expanse of utter darkness lying between the Intellectual Plane and the Archetypal Plane. It marks the line of demarcation between the Intellectual Plane and the Archetypal Plane. Archetypal (Spiritual) Plane = Philosophy Intellectual (Causal) Plane = Psychology Emotional (Astral) = Astrology and Alchemy Physical Plane = Orientation/Exercise Each plane contains an entire Tree of Life within it, which resonates with the other planes.