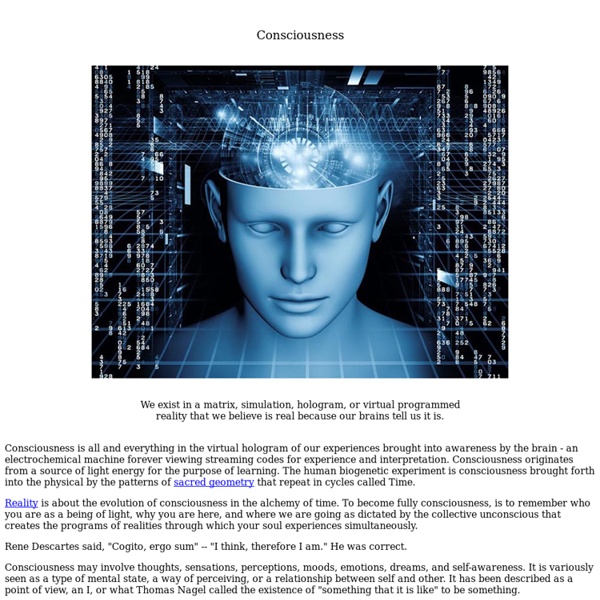 Consciousness We exist in a matrix, simulation, hologram, or virtual programmed reality that we believe is real because our brains tell us it is. Consciousness is all and everything in the virtual hologram of our experiences brought into awareness by the brain - an electrochemical machine forever viewing streaming codes for experience and interpretation. Reality is about the evolution of consciousness in the alchemy of time. Rene Descartes said, "Cogito, ergo sum" -- "I think, therefore I am." Consciousness may involve thoughts, sensations, perceptions, moods, emotions, dreams, and self-awareness. Many philosophers have seen consciousness as the most important thing in the universe. Consciousness is the subject of much research in philosophy of mind, psychology, neuroscience, cognitive science, and artificial intelligence. In common parlance, consciousness sometimes also denotes being awake and responsive to the environment, in contrast to being asleep or in a coma. Mysterianism Dreams

The Most Inspirational Couple On Earth YOOOza Jennifer Lopez gave boyfriend Alex Rodriguez an Opening Day to remember Thursday, surprising the former Yankees slugger in the broadcast booth, where he called the game between the Dodgers and San Francisco Giants in Los Angeles. The newest member of ESPN’s “Sunday Night Baseball,” Rodriguez, 42, delivered a solid debut alongside veterans Jessica Mendoza and Matt Vasgersian. Modal Trigger “#MyView from #DodgerStadium for my first #ESPN game tonight! As Lopez’s 10-year-old son, Max, embraced Rodriguez in the booth, the “Shades of Blue” actress then sealed her visit with a kiss. Lopez later settled into her seat at Dodgers Stadium, as she watched the Giants top the home team, 1-0, alongside Max and daughter Emme, 10. The pair regularly support one another’s endeavors, no matter the time or place. “On the set at 230am… #whenyouknowhegotyou ♥️♥️♥️,” Lopez gushed of Rodriguez Wednesday. The couple of over a year recently purchased a $15 million love nest on Park Avenue.

Harald Kautz-Vella-Geoengineering Researchers discover a 2 billion year old Nuclear Reactor in Africa Ivan Ivan has been part of the team at Universe Explorers since February 2015.He is a freelance writer, editor-in-chief of ancient-code.com He also writes for Svemir Online and Ancient Origins.History, Archaeology, Space and world’s mysteries are some of the topics he writes about.You can follow Ivan on Facebook" Latest posts by Ivan (see all) In 1972, a worker at a nuclear fuel processing plant noticed something suspicious in a routine analysis of uranium obtained from a normal mineral source from Africa. Elsewhere in the earth’s crust, on the moon and even in meteorites, we can find uranium 235 atoms that makes up only 0.720 percent of the total. What was fund in Oklo surprised everyone gathered there, the site where the uranium originated from is actually an advanced subterranean nuclear reactor that goes well beyond the capabilities of our present scientific knowledge. However, Dr.

Incredible scenes as MCG overwhelmed GATES at the MCG had to be opened early as the AFL’s Big Freeze 4 completely overwhelmed the venue. In incredible scenes at the iconic Aussie venue, the queue of supporters trying to get into the stadium before the annual event kicked off was so great officials had to open the gates early. A huge crowd had earlier marched with event organiser and footy legend Neale Daniher from Federation Square to the MCG. The event raises funds and awareness to fight MND (motor neurone disease). The annual tradition of footy personalities and Melbourne identities sliding down a temporary slide into a freezing pool of ice water has been expanded in 2018 with all 18 AFL coaches involved. It is also the last time Daniher will be heavily involved in the running of the event which sets the scene for Collingwood’s annual Queen’s Birthday clash with Melbourne. Daniher’s pre-match pep talk to the coaches was televised by Channel 7, giving a taste of things to come. — with AAP