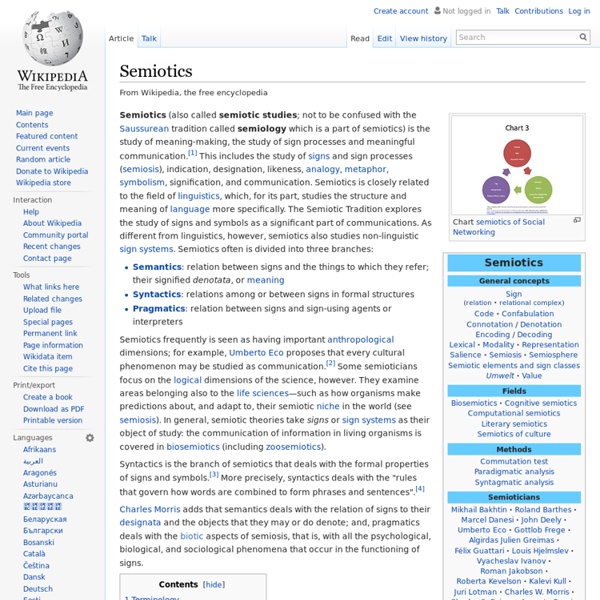 Semiotics frequently is seen as having important anthropological dimensions; for example, Umberto Eco proposes that every cultural phenomenon may be studied as communication.[2] Some semioticians focus on the logical dimensions of the science, however. They examine areas belonging also to the life sciences – such as how organisms make predictions about, and adapt to, their semiotic niche in the world (see semiosis). In general, semiotic theories take signs or sign systems as their object of study: the communication of information in living organisms is covered in biosemiotics (including zoosemiotics). Syntactics is the branch of semiotics that deals with the formal properties of signs and symbols.[3] More precisely, syntactics deals with the "rules that govern how words are combined to form phrases and sentences".[4] Terminology[edit] Ferdinand de Saussure, however, founded his semiotics, which he called semiology, in the social sciences: History[edit] Formulations[edit] Branches[edit] Notes

Signs Daniel Chandler Signs We seem as a species to be driven by a desire to make meanings : above all, we are surely - meaning-makers. Distinctively, we make meanings through our creation and interpretation of 'signs'. Indeed, according to Peirce, 'we think only in signs' (Peirce 1931-58, 2.302) . Space Solar Power is Unspillable Buzz Aldrin, the second man to set foot on the Moon, has proposed an answer to the Louisiana oil spill. It’s solar energy harvested in space, known in the space community as Space Solar Power. “The timing of the oil catastrophe,” says Aldrin, “is a great opportunity for re-evaluating solar energy from space.” International Journal of Applied Semiotics International Journal of Applied Semiotics Edited by François Victor Tochon, Marcel Danesi, and Linda Rogers se·mi·ot·ics: 1. The study of signs and symbols as elements of communicative behavior; the analysis of systems of communication, as language, gestures, or clothing. 2. A general theory of signs and symbolism. — Random House Webster’s Unabridged Dictionary I like to think of semiotics as the natural function of reading signs that exist in nature and are created by and for people.

Outline of semiotics The following outline is provided as an overview of and topical guide to semiotics: Semiotics – study of meaning-making, signs and sign processes (semiosis), indication, designation, likeness, analogy, metaphor, symbolism, signification, and communication. Semiotics is closely related to the field of linguistics, which, for its part, studies the structure and meaning of language more specifically. Also called semiotic studies, or semiology (in the Saussurean tradition). What type of thing is semiotics?[edit] Take Action for the Environment - The Biosphère, an ecobuilding This Web page has been archived on the Web. Archived Content Information identified as archived on the Web is for reference, research or recordkeeping purposes. It has not been altered or updated after the date of archiving. Web pages that are archived on the Web are not subject to the Government of Canada Web Standards. As per the Communications Policy of the Government of Canada, you can request alternate formats on the Contact Us page.

Introduction to Semiotics / Signo Follow us on Semiotics is the academic field dedicated to the study of signs. A sign (for example, the word "ship") may be recognized by the presence of its constituent parts, which in semiotic theories based on Saussure's, at least, are the signifier (the container, or the sign's perceptible form: the letters s-h-i-p) and the signified (the meaning or content; the notion conveyed by the signifier: 'a vessel of considerable size for deepwater navigation'). With these concepts, general semiotics allows us to describe any system of signs: texts, images, performances, multimedia productions, traffic signals, fashion, daily life, etc. There are specific semiotic systems (for text, images, multimedia, and so on) that take into account the specifics of each system of signs.

Council of Writing Program Administrators See also The ACE Journal Abstracts from the Assembly on Computers in English's print journal.Across the Disciplines Lots of resources, including journals and books. The primary emphasis is writing across the curriculum. Gaia hypothesis The study of planetary habitability is partly based upon extrapolation from knowledge of the Earth's conditions, as the Earth is the only planet currently known to harbour life The Gaia hypothesis, also known as Gaia theory or Gaia principle, proposes that organisms interact with their inorganic surroundings on Earth to form a self-regulating, complex system that contributes to maintaining the conditions for life on the planet. Topics of interest include how the biosphere and the evolution of life forms affect the stability of global temperature, ocean salinity, oxygen in the atmosphere and other environmental variables that affect the habitability of Earth. Introduction[edit] Less accepted versions of the hypothesis claim that changes in the biosphere are brought about through the coordination of living organisms and maintain those conditions through homeostasis. In some versions of Gaia philosophy, all lifeforms are considered part of one single living planetary being called Gaia.