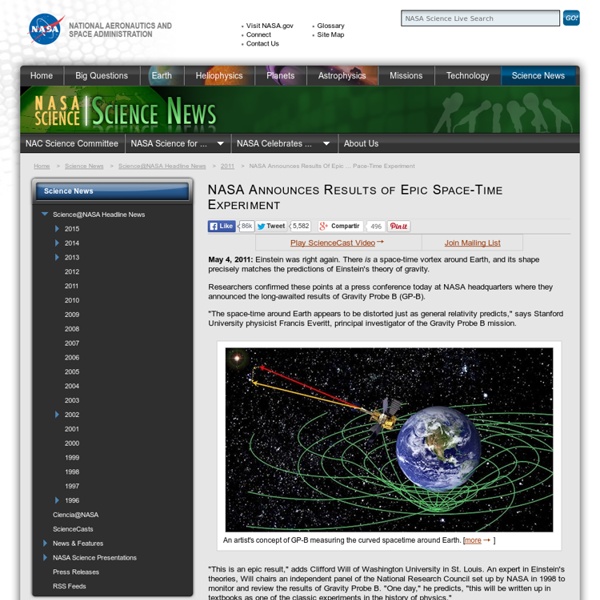 NASA Announces Results of Epic Space-Time Experiment May 4, 2011: Einstein was right again. There is a space-time vortex around Earth, and its shape precisely matches the predictions of Einstein's theory of gravity. Researchers confirmed these points at a press conference today at NASA headquarters where they announced the long-awaited results of Gravity Probe B (GP-B). "The space-time around Earth appears to be distorted just as general relativity predicts," says Stanford University physicist Francis Everitt, principal investigator of the Gravity Probe B mission. "This is an epic result," adds Clifford Will of Washington University in St. Time and space, according to Einstein's theories of relativity, are woven together, forming a four-dimensional fabric called "space-time." If Earth were stationary, that would be the end of the story. The idea behind the experiment is simple: In practice, the experiment is tremendously difficult. Pulling off the experiment was an exceptional challenge. Related:  `test 1021

Alien life existed, NASA scientist claims - Technology & Science Multiple filaments and sheaths embedded in this meteorite could point to extraterrestrial life, says NASA scienist Richard Hoover. (Richard Hoover/The Journal of Cosmology) A NASA scientist says he has found fossilized evidence of alien life in the remains of a meteorite, which if confirmed would bolster the theory that life is not restricted to Earth. The claim that several types of meteorites contain fossils of microscopic creatures similar to cyanobacteria — also known blue-green algae — that originated beyond Earth has predictably created a stir, and 100 experts have been invited to review the research. Astrobiologist Richard Hoover, who works at NASA's Marshall Space Flight Center in Huntsville, Ala., made the claim in a study published online late Friday in the peer-reviewed publication, The Journal of Cosmology . The journal's editor-in-chief, Rudy Schild, says Hoover is a highly respected scientist with a prestigious record of accomplishment at NASA.

Arsenal Flat Renovated from an old Haussmannian building in Paris, the Arsenal Flat by h2o Architects is a truly unique approach to space-efficient housing. Once the space of ancient servant’s bedrooms, the top-floor apartment is now home to a family of four, with a separate room for each child, kitchen, bath, and stunning balcony views. But the real success lies in the transformation of an impossibly small common area into a series of functional, connected spaces.

Pioneer anomaly The Pioneer anomaly or Pioneer effect is the observed deviation from predicted accelerations of the Pioneer 10 and Pioneer 11 spacecraft after they passed about 20 astronomical units (3×109 km; 2×109 mi) on their trajectories out of the Solar System. The apparent anomaly was a matter of tremendous interest for many years. Both Pioneer spacecraft are escaping the Solar System, but are slowing under the influence of the Sun's gravity. Upon very close examination of navigational data, the spacecraft were found to be slowing slightly more than expected. Various explanations, both of spacecraft behavior and of gravitation itself, were proposed to explain the anomaly. Description[edit] Pioneer 10 and 11 were sent on missions to Jupiter and Jupiter/Saturn respectively. Since the spacecraft were flying with almost no additional stabilization thrusts during their "cruise", it is possible to characterize the density of the solar medium by its effect on the spacecraft's motion. Gravity[edit]

How Hydrogen May Expand the Search for Alien Life – National Geographic News Watch When people talk about finding life among the stars, it’s often a fairy tale that comes to mind. That’s because we on Earth really hope to find a planet like ours in what’s called the Goldilocks zone—a region not too close and not too far from the star, but at just the right distance to support liquid water on a planet’s surface. On Earth, water is arguably the most important ingredient for life, so it makes sense that we tend to think of it as a necessary criterion for habitable planets. Still [as is often the case in cutting-edge science] there’s always the chance that we’re wrong, and looking for life *exactly* as we know it may be limiting the search. In a new paper accepted for publication in the Astrophysical Journal Letters, planetary scientists Raymond Pierrehumbert and Eric Gaidos describe how life might evolve on a world outside the traditional habitable zone, thanks to a thick hydrogen atmosphere creating an unusual version of the planet-warming greenhouse effect.

Ascension Alchemy ®: Sacred Geometry, The Language Of Light New Formula: Preface New: in the winter of 2005 we had a square wave frequency generator built for us with multiple programmable channels utilizing a quartz oscillator that creates very precise frequencies with square wave forms. With frequency generators, whether used with plasma tubes, sound waves, etc. most researchers prefer square waves because they propagate harmonics. These original sound frequencies were used in the early Gregorian Chants, such as the great hymn to St. The synthesis of the six tones is encoded in Chrysalis 8 as a standing wave, greater than the sum of the parts, during the torus implosion method we use to lock frequencies into our water based formulas that last for months rather than the minutes that would otherwise occur since water normally reverts quickly back to a disorganized state. Chrysalis 8 was the first product we made available to the public back in the late 1970's before we existed as "ASC Intl." This is not about forming standard clustered water.

Pioneer 10 Pioneer 10 (originally designated Pioneer F) is an American space probe, weighing 258 kilograms, that completed the first mission to the planet Jupiter.[1] Thereafter, Pioneer 10 became the first spacecraft to achieve escape velocity from the Solar System. This space exploration project was conducted by the NASA Ames Research Center in California, and the space probe was manufactured by TRW. Pioneer 10 was assembled around a hexagonal bus with a 2.74 meter diameter parabolic dish high-gain antenna, and the spacecraft was spin stabilized around the axis of the antenna. Its electric power was supplied by four radioisotope thermoelectric generators that provided a combined 155 watts at launch. Pioneer 10 was launched on March 3, 1972, by an Atlas-Centaur expendable vehicle from Cape Canaveral, Florida. Between July 15, 1972, and February 15, 1973, it became the first spacecraft to traverse the asteroid belt. Mission background[edit] History[edit] Pioneer 10 in the final stages of construction

Want to Fly Around the Moon? Commercial Spaceship Gets Another Seat Room for one more? Virginia-based Space Adventures announced Thursday that it will add another seat to a Soyuz spacecraft that will take space tourists into low-Earth orbit by 2015. Working with Rocket Space Corporation Energia, Space Adventures will add a second habitation module to the Soyuz TMA lunar complex, which will take those with (a lot) of extra cash around the moon. "Space Adventures will once again grace the pages of aerospace history, when the first private circumlunar mission launches. About that price. Space Adventures has flown seven spaceflight participants on eight missions to the ISS. Space Adventures estimates that by 2020, about 140 people will have been launched into orbital space. "The next 10 years will be critical for the commercial spaceflight industry with new vehicles and destinations coming online," said Eric Anderson, Space Adventures chairman. Another company exploring commercial space flight is Richard Branson's Virgin Galactic.

Hunt Is On for Gravity Waves in Space-Time | LIGO Because black holes are impossible to see, one of scientists' best hopes to study them is to look for the ripples in space-time, called gravitational waves, that they are thought to create. Gravitational waves would be distortions propagating through space and time caused by violent events such as the collision of two black holes. They were first predicted by Einstein's general theory of relativity; however, scientists have yet to find one. That could change when the latest version of a gravitational wave-hunting facility gets up and running. The Laser Interferometer Gravitational Wave Observatory (LIGO) is actually a pair of observatories, in Louisiana and Washington state, that began operating in 2002. "The advanced LIGO detectors that are now being installed will see out through a substantial part of the universe," said California Institute of Technology emeritus professor of physics Kip Thorne, a leading proponent of LIGO.

Ten things you don’t know about black holes Well, they’re black, and they’re like bottomless holes. What would you call them? -Me, when a friend asked me why they’re named what they are Ah, black holes. The ultimate shiver-inducer of the cosmos, out-jawing sharks, out-ooking spiders, out-scaring… um, something scary. But then, that’s why I’m here. So below I present ten facts about black holes — the third in my series of Ten Things You Don’t Know (the first was on the Milky Way; the second about the Earth). 1) It’s not their mass, it’s their size that makes them so strong. OK, first, a really quick primer on black holes. The most common way for a black hole to form is in the core of a massive star. As the core collapses, its gravity increases. The region around the black hole itself where the escape velocity equals the speed of light is called the event horizon. OK, so now you know what one is, and how they form. So there you go. 2) They’re not infinitely small. So OK, they’re small, but how small are they? 3) They’re spheres. Hmmm.

Using Space-Time Distortions, Scientists Discover Hidden Galaxies Previously hidden behind veils of dust, ancient galaxies have been detected using an effect caused by the space-time distortions in the vast distance between those galaxies and Earth. The discovery of the distant galaxies could shed light on formation of the early universe and galaxies, researchers said. [New photo of the ancient galaxies] Distant galaxies are normally difficult to see, but those whose dim light are shrouded in dust are especially difficult to detect, even using the largest available telescopes. The gravitational pull of massive intervening objects distorts space-time, an effect that can deflect light. Typically, finding gravitational lenses is very time-consuming. The objects seen in the submillimeter range are generally thought to be distant, dusty galaxies undergoing a vigorous burst of star formation. The method the researchers used was simpler than past techniques. The five galaxies the researchers found are just the tip of the iceberg, Negrello told SPACE.com.