The Sacred Geometry of Sound 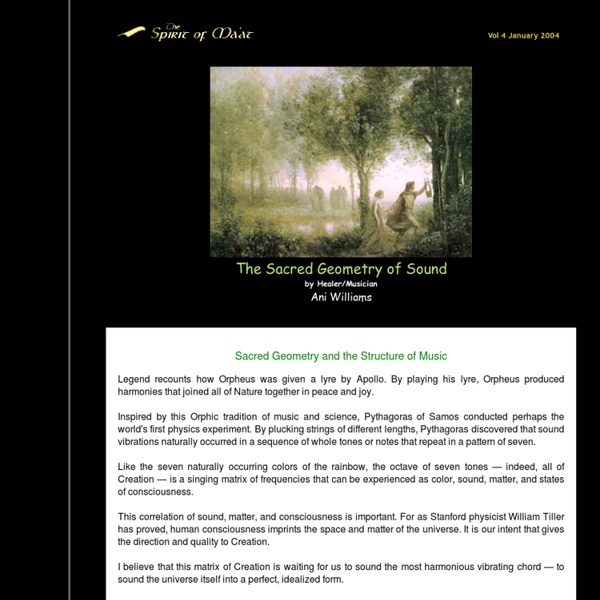 Sacred Geometry and the Structure of Music Legend recounts how Orpheus was given a lyre by Apollo. By playing his lyre, Orpheus produced harmonies that joined all of Nature together in peace and joy. Inspired by this Orphic tradition of music and science, Pythagoras of Samos conducted perhaps the world's first physics experiment. By plucking strings of different lengths, Pythagoras discovered that sound vibrations naturally occurred in a sequence of whole tones or notes that repeat in a pattern of seven. Like the seven naturally occurring colors of the rainbow, the octave of seven tones — indeed, all of Creation — is a singing matrix of frequencies that can be experienced as color, sound, matter, and states of consciousness. This correlation of sound, matter, and consciousness is important. I believe that this matrix of Creation is waiting for us to sound the most harmonious vibrating chord — to sound the universe itself into a perfect, idealized form. The Music of Atomic Shapes Footnotes Related:  `test 1021

showthread Even though this info largely fits into Nassim Harameins work and could be posted on the Nassim thread, I wanted to create a thread solely for Marko Rodins "Vortex Based Mathematics". I have been closley studying his work for a good while now and have come to conclude this this stuff is absolutley A MUST to look at and understand if you are going to bother to try to understand any of this stuff. Of course, knowing of Nassim's work and others like Stan Tenen and Viktor Schauberger etc will GREATLY enhance the connectivity as you start to understand this work. It may look complicated at first but I assure you it is not. You only need to be able to do basic addition, multiplication etc, and having an eye for patterns and symmetry will help. Then you may think that this doesn't equate to anything more than some interesting magic squares or number patterns that are irrelavent to real world applications or the nature of reality. Utube Video Lecture: [B](From RodinAerodynamics.org) Learn about:

The pros and cons of virtual working | Raconteur Over the last few years there has been a turning point – virtual working has become acceptable. Not that it hasn’t been technically possible for a while; it’s just that culture has changed. People understand better and they can see the economics adding up. The numbers are framed nicely in a recent KPMG report, The Virtual Workplace, by David Knight. Barriers are many, says the report, including a loss of management control, loss of employee cohesion and “plain tradition”, which means the virtual model is unlikely to work for everybody. The biggest saving is not in the overheads, it’s the productivity and utilisation – the optimisation of the resource Which is a shame as the benefits can be considerable. “What we’ve had to do is to virtualise recruitment, training and remote management,” he explains. Costs were a powerful determinant in setting the business up to work virtually, but by no means the only one. And it’s increasingly accepted that serious business happens from virtual teams.

The Wind - Masonic Initiation by W. L. Wilmshurst MASONIC INITIATION by W.L. Wilmshurst Chapter II THE WIND The Instruction Lectures of the First Degree (unfortunately not used in some Lodges), contain a curious reference to the blowing of the wind, which must puzzle a good many minds. What has the wind to do with Masonic work, and why should it be particularly favourable to that work when blowing from East to West or vice versa?

The Top 7 AutoCAD Alternatives - Capterra Blog Autodesk is a juggernaut in the drafting industry—and they know it. While they tend to produce sleek, full-featured products, they come at a high cost. In a market filled with terrible AutoCAD knockoffs, it can be tough to distill which products are worth your time—and which aren’t. Luckily I’ve done that work for you and found the top seven alternatives to AutoCAD. I chose these alternatives using four criteria: They read the same kinds of files that AutoCAD doesThey integrate easily with AutoCAD itselfThey’re intuitive to learnAnd they won’t break the bank By whittling down the options from our comprehensive list of engineering CAD software products, I’ve come up with the below options that meet all four criteria. 7. Formerly known as Google Sketchup, this is a great option for CAD professionals. Sketchup is known for being easy to use—its website boasts, “If you want to be productive after just one day of training, you’ve come to the right place.” 6. 5. 4. 3. 2. 1. More?

Three-Phase Power I recently moved my shop, and in addition to the big issues, from forklift rental to sleep deprivation, we also had to deal with things like three-phase power, a variation of power delivery often used for big equipment. The old shop had it and the new shop doesn't. So what the heck is three-phase power and how can you convert machinery to go from the more common single-phase to three-phase and vice versa? Read on. For us, the impact was limited because only the air compressor had a three-phase motor. Some of the welding equipment had been running on three-phase, but can easily be re-configured to run on either three-phase or single-phase. But first, a short explanation of three-phase power. Alternating current does just as it's name implies and alternates cyclically, first flowing in one direction in a circuit and then reversing to flow in the other. Three-phase power provides three alternating currents—essentially three separate electric services—uniformly separated in phase angle. 1.

US To Launch New Moon Mission In 2010 The United States could launch a mission in 2010 that would land two stationary robots on the moon to collect rock samples before returning to earth, a US scientist said here Thursday. Carle Pieters of Brown University's Department of Geological Sciences, who is involved in the US space programme, said the aim of the Moonrise Mission was to land at the moon's largest and oldest crater - the South Pole Aitken Basin. "The purpose is to study how long ago the basin was formed and return materials derived from the deep interior to earth for analysis," Pieters said. "It will also help us to understand the unique process of how basins are formed." Pieters is also the chairwoman of the International Lunar Exploration Working Group, an organisation formed to promote cooperation between nations. She said scientists in the United States were still identifying which landing spots in the basin would be good for the twin robots to gather samples. All rights reserved. 2004 Agence France-Presse.

Timeless Wisdom Travelling salesman problem The travelling salesman problem (TSP) asks the following question: Given a list of cities and the distances between each pair of cities, what is the shortest possible route that visits each city exactly once and returns to the origin city? It is an NP-hard problem in combinatorial optimization, important in operations research and theoretical computer science. Solution of a travelling salesman problem TSP is a special case of the travelling purchaser problem. In the theory of computational complexity, the decision version of the TSP (where, given a length L, the task is to decide whether the graph has any tour shorter than L) belongs to the class of NP-complete problems. The problem was first formulated in 1930 and is one of the most intensively studied problems in optimization. The TSP has several applications even in its purest formulation, such as planning, logistics, and the manufacture of microchips. History[edit] The origins of the travelling salesman problem are unclear. Richard M.

To Build Grit, Go Back to Basics | Harvard Business Review CURT NICKISCH: Welcome to the HBR IdeaCast from Harvard Business Review. I’m Curt Nickisch. Concepts like resilience and grit have been popular in recent years. Well today’s guest is someone who knows about all the kind of mental and emotional fortitude so many people experts say we need – but maybe fewer people actually *have. She’s the youngest woman ever, at 19, to climb Denali, the highest mountain in North America. And luckily – she says we can think about the big idea of grit as a series of smaller pieces. Our guest is Shannon Huffman Polson. SHANNON HUFFMAN POLSON: It’s so good to be with you, Curt. CURT NICKISCH: So first and foremost, what does grit mean to you? SHANNON HUFFMAN POLSON: You know, the way that I have defined it over the past years is a dogged determination in the face of difficult circumstances. CURT NICKISCH: Yeah. xSo let’s talk about your personal experience and understanding of it. CURT NICKISCH: What did your father tell you? CURT NICKISCH: Yeah.