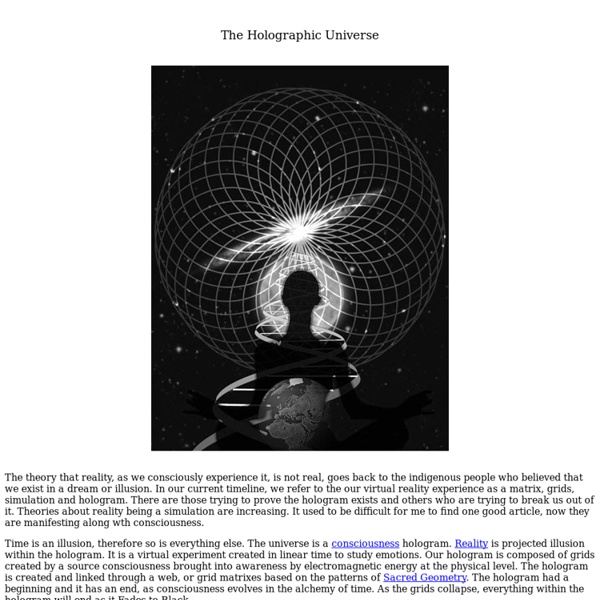 The Holographic Universe The theory that reality, as we consciously experience it, is not real, goes back to the indigenous people who believed that we exist in a dream or illusion. In our current timeline, we refer to the our virtual reality experience as a matrix, grids, simulation and hologram. There are those trying to prove the hologram exists and others who are trying to break us out of it. Theories about reality being a simulation are increasing. Time is an illusion, therefore so is everything else. In media we find films, television shows, books, and games, based on the concept of reality as a hologram. or simulation Among the more easily recognized are The Matrix (Illusion), The Thirteenth Floor (Simulation), Inception (Dream), the Holodeck (Grids) in the TV series Star Trek, among others. Is Our Universe a Hologram? Scientific American Scientific American editor Michael Moyer explains. Are We Living in a Hologram? David Icke We Live In A Multidimensional Holographic Universe

World’s Most Precise Clocks Could Reveal Universe Is a Hologram | Wired Science Our existence could be coded in a finite bandwidth, like a live ultra-high-definition 3-D video. And the third dimension we know and love could be no more than a holographic projection of a 2-D surface. A scientist’s $1 million experiment, now under construction in Illinois, will attempt to test these ideas by the end of next year using what will be two of the world’s most precise clocks. Skeptics of a positive result abound, but their caution comes with good reason: The smallest pieces of space, time, mass and other properties of the universe, called Planck units, are so tiny that verifying them by experiment may be impossible. Craig Hogan, a particle astrophysicist at Fermilab in Illinois, isn’t letting this seemingly insurmountable barrier stop him from trying. Hogan is following through on a radical idea to confirm Planck units with two of the most precise clocks in the world. “What we’re looking for is when the lasers lose step with each other. Via: symmetry breaking See Also:

Quantum Computing: Will It Be a Leap in Human Evolution? Quantum computers have the potential to solve problems that would take a classical computer longer than the age of the universe. Oxford Professor David Deutsch, quantum-computing pioneer, who wrote in his controversial masterpiece, Fabric of Reality says: "quantum computers can efficiently render every physically possible quantum environment, even when vast numbers of universes are interacting. Quantum computers can also efficiently solve certain mathematical problems, such as factorization, which are classically intractable, and can implement types of cryptography which are classically impossible. Quantum computing sounds like science fiction -as satellites, moon shots, and the original microprocessor once were. To leapfrog the silicon wall, we have to figure out how to manipulate the brain-bending rules of the quantum realm - an Alice in Wonderland world of subatomic particles that can be in two places at once. Casey Kazan via University College London

13-Year-Old Makes Solar Power Breakthrough by Harnessing the Fibonacci Sequence While most 13-year-olds spend their free time playing video games or cruising Facebook, one 7th grader was trekking through the woods uncovering a mystery of science. After studying how trees branch in a very specific way, Aidan Dwyer created a solar cell tree that produces 20-50% more power than a uniform array of photovoltaic panels. His impressive results show that using a specific formula for distributing solar cells can drastically improve energy generation. The study earned Aidan a provisional U.S patent – it’s a rare find in the field of technology and a fantastic example of how biomimicry can drastically improve design. Photo by Cristian Bortes Aidan Dwyer took a hike through the trees last winter and took notice of patterns in the mangle of branches. To see why they branch this way he built a small solar array using the Fibonacci formula, stepping cells at specific intervals and heights. His results did turn out to be incorrect though. Via Treehugger

DNA Can be influenced and reprogrammed by words and frequencies « Quantum Pranx by Grazyna Fosar and Franz BludorfRussian DNA Discoveries: Original version THE HUMAN DNA IS A BIOLOGICAL INTERNET and superior in many aspects to the artificial one. The latest Russian scientific research directly or indirectly explains phenomena such as clairvoyance, intuition, spontaneous and remote acts of healing, self healing, affirmation techniques, unusual light/auras around people (namely spiritual masters), mind’s influence on weather patterns and much more. In addition, there is evidence for a whole new type of medicine in which DNA can be influenced and reprogrammed by words and frequencies WITHOUT cutting out and replacing single genes. Only 10% of our DNA is being used for building proteins. It is this subset of DNA that is of interest to western researchers and is being examined and categorized. They found that the alkalines of our DNA follow a regular grammar and do have set rules just like our languages. One can simply use words and sentences of the human language!

Australian Engineers Unveil "Free Energy Machine" THE world may soon be able to buy one of the Far North's most controversial yet revolutionary inventions. The Lutec 1000 free energy machine have resurfaced after six years of steering clear of the public spotlight, having been granted patents in at least 60 countries around the world, including the US, China and India. Engineers John Christie and Lou Brits, who have endured intense criticism after they first unveiled their invention in 2001, are now preparing to construct a prototype of their revolutionary power device they hope to market within the next two years. The dynamic duo said they felt somewhat vindicated they had been able to land patents for their device and have had the Lutec verified by an independent engineer. "When we first kicked off, there was a huge fuss about it and people said we’d never get patents for it," Mr Christie said. "They said it would never work, so we couldn’t get patents, so it’s a good thing to see now."

Free-Energy Devices, zero-point energy, and water as fuel Laws of physics vary throughout the universe, new study suggests A team of astrophysicists based in Australia and England has uncovered evidence that the laws of physics are different in different parts of the universe. The team -- from the University of New South Wales, Swinburne University of Technology and the University of Cambridge -- has submitted a report of the discovery for publication in the journal Physical Review Letters. A preliminary version of the paper is currently under peer review. The report describes how one of the supposed fundamental constants of Nature appears not to be constant after all. "After measuring alpha in around 300 distant galaxies, a consistency emerged: this magic number, which tells us the strength of electromagnetism, is not the same everywhere as it is here on Earth, and seems to vary continuously along a preferred axis through the universe," Professor John Webb from the University of New South Wales said. "The implications for our current understanding of science are profound.

Group Meditation Reduces Terrorism - Research Report A new book by U.S. Army Col. Brian Rees entitled "Terrorism, Retaliation and Victory: Awaken the Soul of America to Defeat Terrorism Without Casualties" discusses a study published in the Journal of Offender Rehabilitation showing 72% reduction in international terrorism using Maharishi Mahesh Yogi's Invincible Defense Technology. The remarkable findings show that large groups of peace-creating meditation experts decrease international conflicts, including deaths and injuries due to terrorism. The study reports that group practice of the Transcendental Meditation(TM) and TM-Sidhi program by 7,000 people decreases terrorism and international conflicts worldwide. On three different occasions during 1983-1995, groups of approximately 7,000 meditators were formed for periods lasting from 8 to 11 days, twice in the United States and once in Holland. "Our formula predicts that the square root of 1% of the world population meditating together would be needed to create a worldwide effect.

Braiding DNA, Is Emotion the Weaver? This article : Braiding DNA, Is Emotion the Weaver? was updated 6/28/99 -WITH A DOZEN MAJOR NEW ILLUSTRATIONS -near the bottom.. Inspired by Dan Winter, Assembled by Panos Axiomakaros , for: This concept that membrane harmonics gone coherent/recursive becomes a specific approach to UNDERSTANDING CANCER -how to create'permission to touch' among membranes (more biophysics pictures and references) at www.danwinter.com/cancer Newly Updated 7/99 Discussion of BRAIDING Disciplines Versus Genetically Engineered food at: Origin of Religion: Hygiene Instructions without Pure Principle This should be read with the newer companion article: SuperConductant DNA vs. For ANIMATION OF THIS BRAIDING IDEA see the new Braiding DNA : ANIMATION moving Tour 9/98 Just Complete 8/23/99 Major Rewrite of the fascinating Gold Powder vs Menstrual Blood/STARFIRE vs MicroHydrin article at: exerpt: please see new DNA braiding with animations at

Solar Activity and Human Behavior: a link? In response to an earlier post I did about Solar Flares and GPS disruption, someone commented about the affects that solar activity can have on human behavior. Having read more about it since then, it seems that there are some interesting correlations. Here are some links I found on the subject: Sunspots and Human BehaviorThis article was published in the year 2000, just after the last Solar Maximum: The recent Solar Maximum gives us a wonderful opportunity to observe the Sun in action. Borderland Sciences has been investigating the relationship of the Sun and human behaviour for many years, and we are quite confident that we can predict behaviours based on sunspot fluctuations over very short and long durations within the Solar Cycle of 11 years. It's interesting, but I want more proof. The Evidence: Historical Events During Sunspot Cycle Heights (1750-2000) A. [...] Ms. Could Cycles of War or Peace Be Tied to Cycles of the Sun? [...] So do I believe it?