Solar power without solar cells: A hidden magnetic effect of light could make it possible 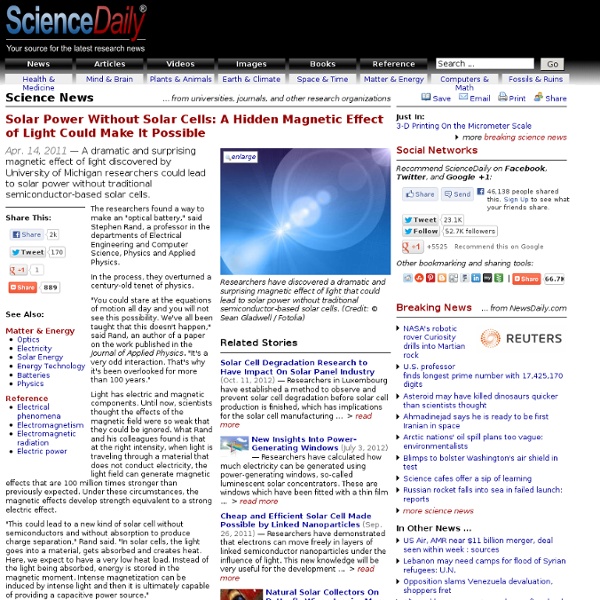 A dramatic and surprising magnetic effect of light discovered by University of Michigan researchers could lead to solar power without traditional semiconductor-based solar cells. The researchers found a way to make an "optical battery," said Stephen Rand, a professor in the departments of Electrical Engineering and Computer Science, Physics and Applied Physics. In the process, they overturned a century-old tenet of physics. "You could stare at the equations of motion all day and you will not see this possibility. Light has electric and magnetic components. "This could lead to a new kind of solar cell without semiconductors and without absorption to produce charge separation," Rand said. What makes this possible is a previously undetected brand of "optical rectification," says William Fisher, a doctoral student in applied physics. Rand and Fisher found that under the right circumstances and in other types of materials, the light's magnetic field can also create optical rectification. Related:  Dimensional / Sacred Geometry • Our Future • Physireality

Sator Square The earliest datable square was found in the ruins of Pompeii which was buried in the ash of Mt. Vesuvius in 79 AD. Examples may be carved on stone tablets, or engraved into clay before firing as pottery. Translation[edit] Sator (from sero=to sow) Sower, planter; founder, progenitor (usually divine); originator Arepo unknown, likely an invented proper name; its similarity with arrepo, from ad repo, 'I creep towards', may be coincidental Tenet (from teneo=to hold) holds, keeps; comprehends; possesses; masters; preserves Opera (a) work, care; aid, service, (an) effort/trouble Rotas (rota) wheel, rotate; (roto) (I) whirl around, revolve rotate; used in the Vulgate Psalms as a synonym for whirlwind and in Ezekiel as plain old wheels. One likely translation is "The farmer Arepo has [as] works wheels [a plough]"; that is, the farmer uses his plough as his form of work. Appearances[edit] Anagram formed by the letters of the sator square Christian associations[edit] Magical uses[edit] See also[edit] [edit]

(3) Given our current technology and with the proper training, would it be possible for someone to become Batman Beyond 'absolute zero' temperatures get hotter It sounds like a contradiction in terms but scientists have reached temperatures that go beyond absolute zero in a lab, and get hotter as they do so. Whereas we’re all aware of what happens when temperatures hit negative temperatures on the Fahrenheit and Celsius scales (hint: it gets really cold), the Kelvin scale is an absolute temperature scale in physics where it is not possible to go beyond 0 degrees Kelvin. Therefore, the lowest point that any temperature can reach is 0 K or −460 °F (−273.15 °C); at least that’s what scientists thought until till now. When they cooled an atomic gas to extreme lows, known as ‘ultracooling’, physicists at the Ludwig-Maximilians University Munich and the Max Planck Institute of Quantum Optics in Germany created a gas that went beyond absolute zero. They found that the atoms in the ultracooled gas attract each other and give rise to a negative pressure. Instead of standing still when they go beyond 0 K, the gas becomes hotter.

24 Terrifying, Thoughtful and Absurd Nursery Rhymes for Children In more repressed times, people were not always allowed to express themselves freely, for fear of persecution. Gossiping, criticizing the government or even talking about current events were often punishable by death. In order to communicate at will, clever rhymes were constructed and passed around to parody public figures and events. The first nursery rhymes can be traced back to the fourteenth century. While the Bubonic Plaque ravaged England, peasants used a rhyme to spread the word about equality. The "Adam and Eve" rhyme made peasants realize that they were important to the economy and contributed to the Peasants Revolt of 1381. Other nursery rhymes don't seem to carry a particular message at all, but convey a macabre sense of humor. Humpty Dumpty Humpty Dumpty sat on a wall,Humpty Dumpty had a great fall,All the King's Horses and all the King's menCouldn't put Humpty together again. In children's books, Humpty Dumpty is portrayed as a large egg, usually dressed like a little boy.

Lights and flat-panel displays: Researchers 'brighten' the future of organic light-emitting diode technology Chlorine is an abundant and readily available halogen gas commonly associated with the sanitation of swimming pools and drinking water. Could a one-atom thick sheet of this element revolutionize the next generation of flat-panel displays and lighting technology? In the case of Organic Light-Emitting Diode (OLED) devices, it most certainly can. Primary researchers Michael G. Helander (PhD Candidate and Vanier Canada Graduate Scholar), Zhibin Wang (PhD Candidate), and led by Professor Zheng-Hong Lu of the Department of Materials Science & Engineering at the University of Toronto, have found a simple method of using chlorine to drastically reduce traditional OLED device complexity and dramatically improve its efficiency all at the same time. "It turns out that it's remarkably easy to engineer this one-atom thick layer of chlorine onto the surface of ITO," says Helander.

Sacred Geometry: Deciphering the Code untitled by J. Curt Stager This article is an adaptation of the introduction to J. Curt Stager’s Deep Future: The Next 100,000 Years of Life on Earth (Thomas Dunne Books, an imprint of St. This excerpt appears in two parts. In the past, seemingly intractable debates over environmental issues have sometimes been resolved with the aid of long-term historical perspectives. Although it's a rather eclectic discipline that straddles the fields of geology and biology, my chosen profession of paleoecology is well known among scientists for its ability to harness truly long-term thinking in order to place current environmental issues into their most meaningful contexts, showing us where we've been, how we got here, and where we're likely to be headed next. Today, scientists with such long-term perspectives are once again nudging us beyond currently entrenched arguments over human-driven climate change, but their gaze is aimed forward in time, as well as backward. But all is not doom and gloom.

Is dark energy static or dynamic? (Phys.org)—While hypothesized dark energy can explain observations of the universe expanding at an accelerating rate, the specific properties of dark energy are still an enigma. Scientists think that dark energy could take one of two forms: a static cosmological constant that is homogenous over time and space, or a dynamical entity whose energy density changes in time and space. By examining data from a variety of experiments, scientists in a new study have developed a model that provides tantalizing hints that dark energy may be dynamic. The scientists, Gong-Bo Zhao of the University of Portsmouth in the UK and the Chinese Academy of Science in Beijing; Robert G. Crittenden of the University of Portsmouth; Levon Pogosian of Simon Fraser University in Burnaby, British Columbia, and the University of Portsmouth; and Xinmin Zhang of the Chinese Academy of Science, have published their paper on the evidence for dynamical dark energy in a recent issue of Physical Review Letters.

Alice's Adventures in Wonderland Background[edit] Page from the original manuscript copy of Alice's Adventures Under Ground, 1864 Alice was published in 1865, three years after the Reverend Charles Lutwidge Dodgson and the Reverend Robinson Duckworth rowed in a boat, on 4 July 1862[4] (this popular date of the "golden afternoon"[5] might be a confusion or even another Alice-tale, for that particular day was cool, cloudy and rainy[6]), up the Isis with the three young daughters of Henry Liddell (the Vice-Chancellor of Oxford University and Dean of Christ Church): Lorina Charlotte Liddell (aged 13, born 1849) ("Prima" in the book's prefatory verse); Alice Pleasance Liddell (aged 10, born 1852) ("Secunda" in the prefatory verse); Edith Mary Liddell (aged 8, born 1853) ("Tertia" in the prefatory verse).[7] The journey began at Folly Bridge near Oxford and ended five miles away in the village of Godstow. Synopsis[edit] Chapter Twelve – Alice's Evidence: Alice is then called up as a witness. Characters[edit] Symbolism[edit]

Physicists create clouds of impenetrable gases that bounce off each other When one cloud of gas meets another, they normally pass right through each other. But now, MIT physicists have created clouds of ultracold gases that bounce off each other like bowling balls, even though they are a million times thinner than air -- the first time that such impenetrable gases have been observed. While this experiment involved clouds of lithium atoms, cooled to near absolute zero, the findings could also help explain the behavior of similar systems such as neutron stars, high-temperature superconductors, and quark-gluon plasma, the hot soup of elementary particles that formed immediately after the Big Bang. A paper describing the work will appear in the April 14 issue of Nature. The researchers, led by MIT assistant professor of physics Martin Zwierlein, carried out their experiment with an isotope of lithium that belongs to a class of particles called fermions. Different states of fermionic matter are distinguished by their mobility.

High-temperature superconductor spills secret: A new phase of matter? Scientists have found the strongest evidence yet that a puzzling gap in the electronic structures of some high-temperature superconductors could indicate a new phase of matter. Understanding this "pseudogap" has been a 20-year quest for researchers who are trying to control and improve these breakthrough materials, with the ultimate goal of finding superconductors that operate at room temperature. "Our findings point to management and control of this other phase as the correct path toward optimizing these novel superconductors for energy applications, as well as searching for new superconductors," said Zhi-Xun Shen of the Stanford Institute for Materials and Energy Science (SIMES), a joint institute of the Department of Energy's SLAC National Accelerator Laboratory and Stanford University. Shen led the team of researchers that made the discovery; their findings appear in the March 25 issue of Science. The electrons in the pseudogap state aren't superconducting -- so what are they doing?

Scientists extract images directly from brain ::: Pink Tentacle Researchers from Japan's ATR Computational Neuroscience Laboratories have developed new brain analysis technology that can reconstruct the images inside a person's mind and display them on a computer monitor, it was announced on December 11. According to the researchers, further development of the technology may soon make it possible to view other people's dreams while they sleep. The scientists were able to reconstruct various images viewed by a person by analyzing changes in their cerebral blood flow. Using a functional magnetic resonance imaging (fMRI) machine, the researchers first mapped the blood flow changes that occurred in the cerebral visual cortex as subjects viewed various images held in front of their eyes. Subjects were shown 400 random 10 x 10 pixel black-and-white images for a period of 12 seconds each. For now, the system is only able to reproduce simple black-and-white images. "These results are a breakthrough in terms of understanding brain activity," says Dr.