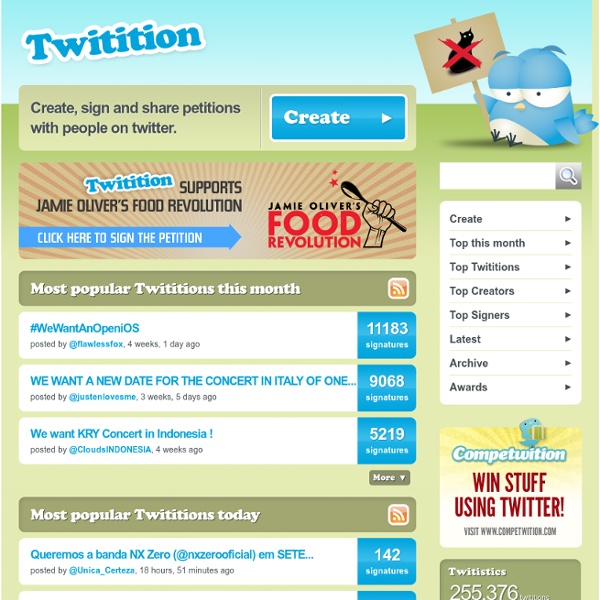 Profile for Richard Lazzara Tips for Searching Twitalyzer To get the most from Twitalyzer's search functionality consider the following: You can prefix your search with "@" to indicate a Twitter user You can prefix your search with "#" to indicate a Twitter hashtag Additionally, if you want to dig more deeply into our data, please use our Explore Report . Subscribe to Twitalyzer and Track Multiple Accounts Subscribe to Twitalyzer today and you can track thousands of individual Twitter accounts! Tweet-o-Meter Is it true that, "New York is the city that never sleeps!"? Do Londoners send more Tweets than New Yorkians'? Is Oslo a bigger Tweeter than Munich? Avaaz: can online campaigning reinvent politics? How do you run an organisation with 17 million bosses? Avaaz, the online campaigning giant that has taken action on Palestinian statehood, phone hacking and News International, and the pre-trial detention of Bradley Manning, among much else, is making its annual attempt to find an answer to that question this week. Avaaz's 2012 campaigns included a petition with nearly 1m signatures calling for universal education in Pakistan after the shooting of 15-year-old schoolgirl activist Malala Yousafzai. It was delivered by a UN envoy directly to the Pakistani president – who signed it himself. Avaaz also amassed 1.8m signatures for Palestinian statehood, and was part of the internet-wide efforts against new censorship laws in January. But now, in a bid to decide what to do next, the five-year-old activism organisation is holding what one staffer describes as a "global party conference" to let its members try to set the agenda for the year ahead.

Twitter History Creation and initial reaction Twitter's origins lie in a "daylong brainstorming session" held by board members of the podcasting company Odeo. Dorsey, then an undergraduate student at New York University, introduced the idea of an individual using an SMS service to communicate with a small group.[15][16] The original project code name for the service was twttr, an idea that Williams later ascribed to Noah Glass,[17] inspired by Flickr and the five-character length of American SMS short codes. The developers initially considered "10958" as a short code, but later changed it to "40404" for "ease of use and memorability.

UnfollowıngForTwıtter Have you asked yourself this? Well you're in luck - ManageFlitter has the answer! Click "Connect to Twitter" below to connect your account. We'll process data on your followers and within a few seconds you'll see the screen below - a list of all the people who have unfollowed you.

Twitter explodes over Verizon's 'share everything' plan The social media universe was buzzing Thursday with reports that Verizon, on orders from a top secret court, has been handing over call data to national security officials. The original story, published by The Guardian , had more than 10,200 shares on Twitter and 69,000 shares on Facebook before 10 a.m. By 1:30 p.m., the Facebook shares exceeded 103,000. The hashtag #NSA was trending for hours on Twitter and continued into the afternoon, with anger, confusion and plenty of jokes – especially around Verizon's "share everything plan" and their catch phrase "Can you hear me now?" The Obama administration defended the National Security Agency's need to collect telephone records of U.S. citizens -- without actually confirming published reports that Verizon had been ordered to provide the NSA with call records for millions of U.S. customers since April.

Streamdın We create amazing digital experiences We are digital strategists, creatives, engineers, and mentors. We are the digital agency of today creating amazing iPhone, iPad, Android, and Web experiences for tomorrow. TSL3 The PokerStrategy TeamLiquid StarLeague 3, the first TSL event held for StarCraft II, was an international open tournament that took place from March through May 2011, offering a US$34,500 prize pool. It continued the tradition established by the 2008 Razer TSL and the 2009 Pokerstrategy.com TSL, with Korean progamers participating for the first time. Thirty-two players gained eligibility to compete through earning seeds from the TSL2, receiving invitations, winning one of eight qualification events starting in January 2011, or ranking highly in points earned from qualification events. The single-elimination five-round tournament was played beginning in March 2011, with each match a best-of-3, -5, or -7 series. Results were revealed each weekend as pairs of casters commentated over a live stream, usually from replays. History[edit]