It's what's happening. E-learning for primary school teachers - Unite IT: The e-Inclusion Network in Europe. The e-learning is the use of new multimedia technologies and the Internet to improve the quality of learning by facilitating access to resources and services as well as remote exchanges and collaboration. 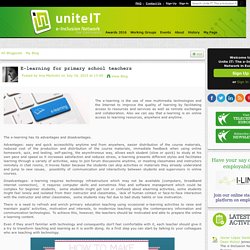 Also we can say that e-learning is an online access to learning resources, anywhere and anytime. The e-learning has its advantages and disadvantages. Disadvantages: e-learning requires technology infrastructure which may not be available (computers, broadband internet connection), it requires computer skills and sometimes files and software management which could be complex for beginner students, some students might get lost or confused about elearning activities, some students might feel lonely and isolated from their instructor and classmates, lack of human contact or face-to-face interaction with the instructor and other classmates, some students may fail due to bad study habits or low motivation.

5 Ways Twitter Can Help in Education - Getting Smart by Guest Author - edchat, social media, twitter. By: Pamela Rossow If you are in an educational field as a student, teacher, or parent, you may have wondered about the benefits of social media—specifically Twitter. 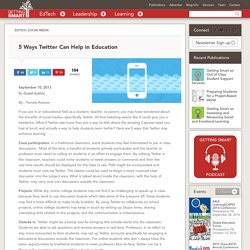 All that tweeting seems like it could give you a headache. What if Twitter was more than just a way to dish about the amazing Caprese salad you had at lunch and actually a way to help students learn better? Here are 5 ways that Twitter may enhance learning . . . Class participation. Projects. Outside in. Networking. Finding information. Education and Twitter can be synonymous if Twitter is used in a way that benefits educators and students. Pamela Rossow is a freelance writer who works with higher education clients such as eLearners. 21 200 1 PB. Using Twitter effectively in education - with Alec Couros. Using Twitter for Professional Development. The term “professional development” conjures up thoughts of travel, conference fees, arranging substitutes, and loss of precious instructional time. 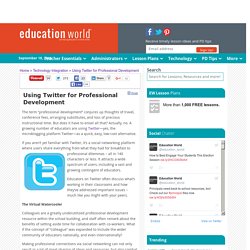 But does it have to entail all that? Actually, no. A growing number of educators are using Twitter—yes, the microblogging platform Twitter—as a quick, easy, low-cost alternative. If you aren’t yet familiar with Twitter, it’s a social networking platform where users share everything from what they had for breakfast to professional dilemmas – all in 140 characters or less. Educators on Twitter often discuss what’s working in their classrooms and how they’ve addressed important issues – much like you might with your peers. The Virtual Watercooler Colleagues are a greatly underutilized professional development resource within the school building, and staff often remark about the benefits of setting aside time for collaboration with co-workers.

50 Ways to Use Twitter in the Classroom. Many critics of Twitter believe that the 140-character microblog offered by the ubiquitous social network can do little for the education industry. They are wrong. Twitter Literacy (I refuse to make up a Twittery name for it) - City Brights: Howard Rheingold. Post-Oprah and apres-Ashton, Twittermania is definitely sliding down the backlash slope of the hype cycle. 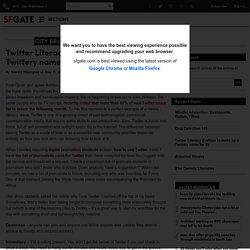 It’s not just the predictable wave of naysaying after the predictable waves of sliced-breadism and bandwagon-chasing. We’re beginning to see some data. Nielsen, the same people who do TV ratings, recently noted that more than 60% of new Twitter users fail to return the following month. To me, this represents a perfect example of a media literacy issue: Twitter is one of a growing breed of part-technological, part-social communication media that require some skills to use productively. Sure, Twitter is banal and trivial, full of self-promotion and outright spam. When I started requiring digital journalism students to learn how to use Twitter, I didn’t have the list of journalistic uses for Twitter that I have compiled by now.

One of my students asked me online why I use Twitter. Immediacy – it is a rolling present. 25 Ways to Get the Most Out of Twitter. Imagine being able to connect with one hundred million people anytime you want. 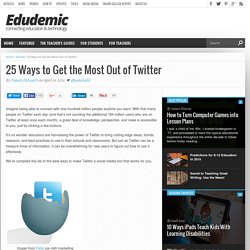 With that many people on Twitter each day (and that’s not counting the additional 184 million users who are on Twitter at least once each month), a great deal of knowledge, perspective, and news is accessible to you, just by clicking a few buttons. It’s no wonder educators are harnessing the power of Twitter to bring cutting edge ideas, trends, research, and best practices to use in their schools and classrooms. But just as Twitter can be a treasure trove of information, it can be overwhelming for new users to figure out how to use it effectively. We’ve compiled this list of the best ways to make Twitter a social media tool that works for you.

Image from Flickr via mkh marketing Get Started 1. 2. Find People 3.