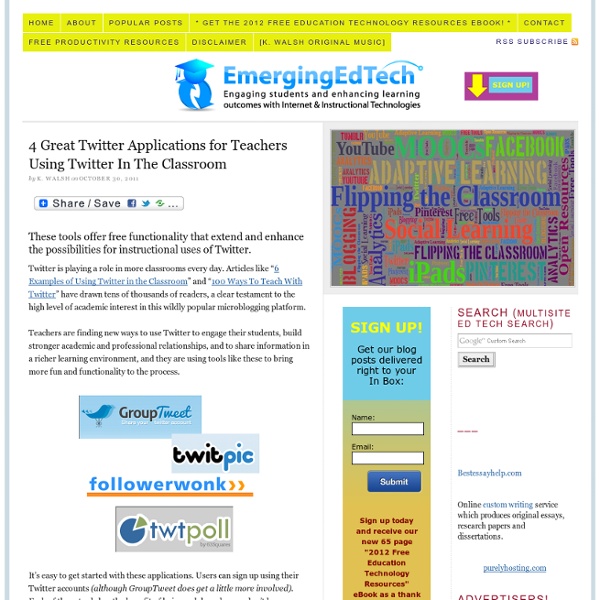 These tools offer free functionality that extend and enhance the possibilities for instructional uses of Twitter. Twitter is playing a role in more classrooms every day. Articles like “6 Examples of Using Twitter in the Classroom” and “100 Ways To Teach With Twitter” have drawn tens of thousands of readers, a clear testament to the high level of academic interest in this wildly popular microblogging platform. Teachers are finding new ways to use Twitter to engage their students, build stronger academic and professional relationships, and to share information in a richer learning environment, and they are using tools like these to bring more fun and functionality to the process. It’s easy to get started with these applications. Users can sign up using their Twitter accounts (although GroupTweet does get a little more involved). Twtpoll (twtpoll.com)Polling and survey tools provide teachers so many capabilities. About Kelly Walsh Print This Post

What Mel Brooks Can Teach Us about “Group Flow” In 1949, the comedian Sid Caesar brought together a legendary group of comedy writers and created one of the biggest television hits of the 1950s, Your Show of Shows. Caesar’s team included Mel Brooks, Carl Reiner, and Neil Simon. It may have been the greatest writing staff in the history of television. They developed the show in a small suite of rooms on the sixth floor of 130 West 56th Street in Manhattan. 7 Twitter Users to Follow If You Are Interested in Education Technology A great mix of individual experts and enthusiasts and education technology professionals to follow and stay informed with. Guest post by Maria Rainier. Though Twitter’s contribution to the world of social media and progressive society was at one time a strongly argued point, there is no doubt today that the popular social media platform has become a valuable tool for various aspects of education. Sure, Twitter can be the perfect place to waste hours on mundane details about people’s lives or worthless celebrity gossip. But, the microblogging platform also enables us to create and participate in meaningful conversations concerning education, technology, and society.

Does Google Make Us Stupid? Overview of responses In an online survey of 895 technology stakeholders’ and critics’ expectations of social, political and economic change by 2020, fielded by the Pew Research Center’s Internet & American Life Project and Elon University’s Imagining the Internet Center: » Google won’t make us stupid: 76% of these experts agreed with the statement, “By 2020, people’s use of the Internet has enhanced human intelligence; as people are allowed unprecedented access to more information they become smarter and make better choices. Nicholas Carr was wrong: Google does not make us stupid.” 10 Ways Students Can Use Twitter for Paper Writing It been a while since we’ve posted any content on using Twitter in the academic context, so this submission from Leslie Anglesey is welcomed. These suggestions are directed towards students but teachers may also glean some ideas from them. Please be sure to comment and share your own favorite ways to use Twitter in the classroom, and be sure to check out the other related articles offered below!

The Disposable Film Festival - Events One of the world's "coolest film festivals" according to MovieMaker Magazine, the Disposable Film Festival premieres its 7th annual competitive shorts program here in San Francisco before screening it around the world. Be the first to see this year's collection of the best disposable films made on everyday devices like cell phones, pocket cameras, and webcams. Opening Night at the Castro TheatreThursday, March 20th, 2014From 8:00 p.m. to 10:00 p.m. (PDT)San Francico, CA | The Castro TheatreCLOSED Creativity Workshop: Set Your Inner David O. Russell FreeSaturday, March 22nd, 2014From 1:00 p.m. to 3:00 p.m. Top Twitter Hashtags for Teachers Hashtags are a great way of searching for tweets in a specific category from the whole of the Twitterverse – search for #ukedchat and you will come up with a huge stream of tweets which have been tagged as interesting to anyone wanting to read about UK education. As well as searching for tagged tweets, you can tag your own tweet to make sure you are talking to an interested audience that extends beyond your followers. You can tag absolutely any word on Twitter so it can sometimes be difficult to sort the wheat from the chaff. I have read dozens of lists of ‘useful’ hashtags where many of the tags have never been used more than a handful of times. Not useful in my book.

Ultimate Pirate Ship Bedroom (14 pics) "The rope bridge is connected to the top of the jail cell, built to accommodate evil doers, thieves and little sisters." Designer Steve Kuhl fulfills every boy's fantasy with this insanely cool pirate ship bedroom. The six-year-old occupant from Minnesota chose between a space ship, race car, castle, and pirate ship. Most of us would probably agree, he made an excellent decision. The main feature of the room is the incredible floating pirate ship. Kuhl used 2x12 ribs to construct the hull of the ship, covering them with layers of 1/2 inch plywood to act as the planking. Partner With Us  :  Overview SmartBrief 101 5 Million Subscriptions 180+ Partners / Associations 1,047 Advertisers Total number of summaries in one year - 522,022Total sources used - 7,355 (*2,000 used more than once)Total articles ‘examined’ in a year - 52,445,700

Broad Museum's scandalous math: A $7.7 million land gift to billionaire from broke Los Angeles City Hall By Tibby Rothman What can $1 a year get a billionaire in Los Angeles these days? click to enlarge Hard bargainer Evidently, a property worth $7.7 million. City of L.A. Smuggles $884 Million From Redevelopment Agency At Surprise Meeting, Ducking State Cuts And Public Scrutiny click to enlarge Update: Do we really want $1 billion and the future of L.A. urban development to remain trapped in the incestual CRA-City Hall family? Update: Turns out they actually transferred all CRA assets and projects, bringing the total city transfer to more like an abstract $1 billion, according to Kaye.

Grand Avenue Drenched in Misdirection The Luxe Grand Avenue Project, if ever built on a hunk of taxpayer-owned land downtown, will feature a glittery five-star hotel and the curious involvement of the wealthy royal family of Dubai, who control a tiny Gulf oil nation cited by the U.S. State Department for human rights abuses. One thing the public project does not feature, however, is transparency.