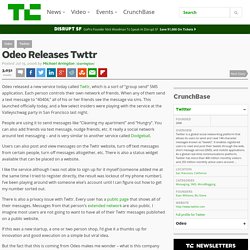 Each person controls their own network of friends. When any of them send a text message to “40404,” all of his or her friends see the message via sms. This launched officially today, and a few select insiders were playing with the service at the Valleyschwag party in San Francisco last night. People are using it to send messages like “Cleaning my apartment” and “Hungry”. You can also add friends via text message, nudge friends, etc.

Users can also post and view messages on the Twttr website, turn off text messages from certain people, turn off messages altogether, etc. There Is A Difference Between Evil And Just Absurdly Profitable. Lots of negative feedback from our post the other day on Cash4Gold’s amazing growth and profitability. 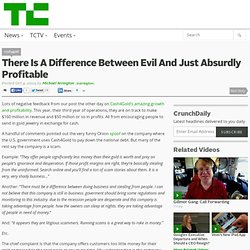 This year, their third year of operations, they are on track to make $160 million in revenue and $50 million or so in profits. All from encouraging people to send in gold jewelry in exchange for cash. A handful of comments pointed out the very funny Onion spoof on the company where the U.S. government uses Cash4Gold to pay down the national debt. More Investors Pile Into Twitter’s Funding Round, Now Reportedly. Twitter is about to raise a boatload of cash. 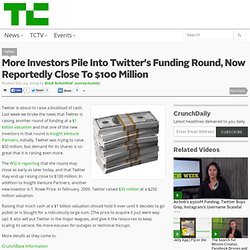 Last week we broke the news that Twitter is raising another round of funding at a $1 billion valuation and that one of the new investors in that round is Insight Venture Partners. Initially, Twitter was trying to raise $50 million, but demand for its shares is so great that it is raising even more. The WSJ is reporting that the round may close as early as later today, and that Twitter may end up raising close to $100 million. 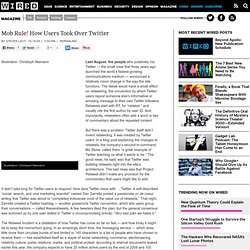 The tweak would have a small effect on retweeting, the convention by which Twitter users repost someone else’s informative or amusing message to their own Twitter followers. Why Google and Bing's Twitter Announcement is Big News - O'Reill. Lurking innocently on Google’s blog this afternoon, like many of their big announcements, was the bombshell that they have reached an agreement with Twitter to make all tweets searchable. 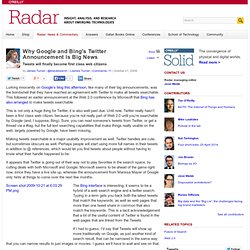 This followed an earlier announcement at the Web 2.0 conference by Microsoft that Bing has also arranged to make tweets searchable. This is not only a huge thing for Twitter, it is also well past due. The biggest loser in the Twitter search deals. No, it’s not FriendFeed, although yesterday didn’t provide any good news to users there who really would love to hear that their community still matters. 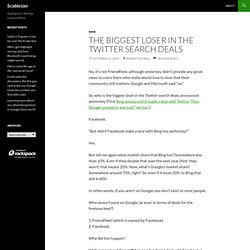 Google and Microsoft said “no.” So, who is the biggest loser in the Twitter search deals announced yesterday (First Bing announced it made a deal with Twitter. Then Google jumped in and said “me too.”) Facebook. “But didn’t Facebook make a deal with Bing too yesterday?” Yes. But tell me again what market share that Bing has? Sean Parker: Twitter/Facebook Will Soon Dominate The Web — Not G.

Sean Parker, a managing partner at Founder’s Fund, gave an interesting talk today at the Web 2.0 Summit in San Francisco. 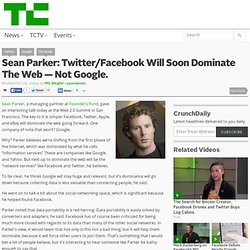 The key to it is simple: Facebook, Twitter, Apple, and eBay will dominate the web going forward. Sean Parker’s Rise of Facebook And Twitter, Fall Of Google Prese. Yesterday at the Web 2.0 Summit, Founder’s Fund managing partner Sean Parker gave a provocative presentation entitled “The New Era Of The Network Service.” 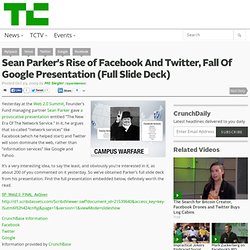 In it, he argues that so-called “network services” like Facebook (which he helped start) and Twitter will soon dominate the web, rather than “information services” like Google and Yahoo. It’s a very interesting idea, to say the least, and obviously you’re interested in it, as about 200 of you commented on it yesterday. So we’ve obtained Parker’s full slide deck from his presentation. Find the full presentation embedded below, definitely worth the read. The chat room/forum problem (& an apology to @Technosailor) I’ve been doing online communities for more than 20 years, starting in 1985 when a friend had a BBS. 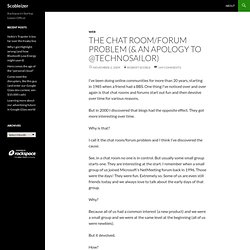 Twitter to turn on advertising “you will love” (here’s how: Supe. More thoughts on in-Tweet advertising. I believe that people who produce content should be able to make a living for producing that content. 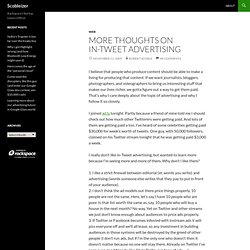 If we want journalists, bloggers, photographers, and videographers to bring us interesting stuff that makes our lives richer, we gotta figure out a way to get them paid. That’s why I care deeply about the topic of advertising and why I follow it so closely. I joined ad.ly tonight. Partly because a friend of mine told me I should check out how much other Twitterers were getting paid. Yo @chrisbrogan you’re doing Twitter wrong. The Case for In-Stream Advertising. The topic of whether in-stream advertising has heated up. I just read well written pieces on the topic by Ross Kimbarovsky, Robert Scoble, Paul Carr and the NY Times. I myself recently covered the topic when I spoke about why GRP Partners invested in Ad.ly.

Twitter’s New “At Anywhere” Platform Allows For Deeper Integrati. TweetDeck Taps TwitVid For Video Sharing, Replacing 12seconds. TweetDeck is switching its default video Tweeting platform today, from 12seconds to TwitVid. TwitVid.com will serve as the video service across all existing TweetDeck products, as well as all new products released by TweetDeck in 2010. TwitVid will be integrated into the next iteration of the TweetDeck’s desktop application, which is expected to be launched next month. TwitVid will also be the default video application in TweetDeck’s iPhone application and soon-to-be-released Android application.

Twitter. Live: Twitter CEO Ev Williams’s Chirp Keynote. Twitter CEO Evan Williams has just taken the stage for his Chirp keynote. I’ll be liveblogging his talk below. Update: the full talk is now available and embedded below as well. Twitter has 105,779,710 Registered Users, Adding 300K A Day. Twitter Finally Reveals All Its Secret Stats. Just the Facts: Statistics from Twitter Chirp. Twitter world. The Twitter Platform. Enduring Value When we discuss the future of Twitter, we focus on the mechanisms through which we can build a platform of enduring value. The three mechanisms most important to building such a platform are architecting for extensibility, providing a robust API to the platform’s functionality, and ensuring the long-term health and value of the user experience. The purpose of this post is to explain what we are building, how we will sustain the company and ecosystem, and where we believe there will be great opportunities for the vast ecosystem of partners.

Twitter is an open, real-time introduction and information service. On a daily basis we introduce millions to interesting people, trends, content, URLs, organizations, lists, companies, products and services. Twitter Has Basically Doubled In Staff In The Past 6 Months. At some point last week, Twitter zoomed past 200 employees. The official count is now 205, according to head of communications Sean Garrett.