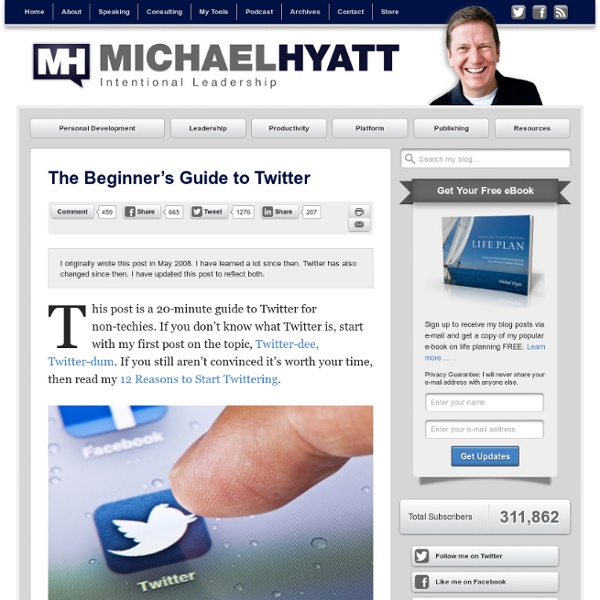 Twitter: a step-by-step guide to getting started If the recent buzz around Twitter, the micro-blogging platform, has aroused your curiosity you may be wondering how to get started. Twitter is not a publishing platform, as I said yesterday, so you can’t simply go to the site and read it. Well, you can but that’s not really the point. To get the most out of Twitter you need to build a network and then start using a few tools. So here’s a step-by-step guide.

Ultimate Guide to Google Plus I’ve seen quite a few people who don’t understand Google Plus or think Google Plus is some sort of wasteland with giant swaths of inactivity. I was one of these people until I decided to dive in and really explore the social network and become active on there to see what this G+ thing is all about. The end result is this guide, a complete Google Plus guide for the person who is just getting started, or quite simply, started but staring at a boring feed with zero activity. Take a look at the sections below and click any section that has your interest. The Google Plus Beginner Guide Sections First State of the Twitosphere in France On this blog I already published several posts with a detailed analysis of the twitosphere in a specific country. From time to time people ask me to have a closer look at their country, e.g. France.

Using Twitter for Professional Development The term “professional development” conjures up thoughts of travel, conference fees, arranging substitutes, and loss of precious instructional time. But does it have to entail all that? Actually, no. The Beginner's Guide to Google+ When Google+ entered the social space in 2011, it was met largely with skepticism. Joining a crowded field with platforms such as Facebook and Twitter, many users questioned the need for another social network. But roughly two years later, Google+ has established itself as the second-largest social media site in the world and boasts a monthly active user base of 235 million. And some of the products that Google built into the platform, such as Hangouts and Communities, along with its added integration in Google News that can benefit an active poster, have made Google+ an intriguing network for all users. If you're a newbie to Google+, these tips will help you get started.

How to use Twitter replies In this post Chuck Westbrook (follow him @cwestbrook) looks uses the analogy of Dinner Conversation to explain the basics of different types of communication on Twitter. Image by Thomas Hawk Twitter is a lot like a dinner with a large group of friends at a big table in a busy restaurant. Everyone is chatting, thereâ€™s a lot being said, and if youâ€™re not focused on a particular conversation, it sounds downright noisy. Over 100 ideas for using Twitter in the Classroom This handful of resources provide about 100 different ideas for, and examples of, using Twitter in the classroom. It’s been almost 8 months since I published the post, “6 Examples of Using Twitter in the Classroom”, about uses of the popular micro-blogging tool in the instructional setting. This post generated a lot of traffic, and continues to attract hundreds of viewers every week. Since that brief posting, I’ve come across a lot of articles containing examples and suggestions for using Twitter in instructional applications.

40 Google Plus Tips for Newbies Ok, so at this point, we are all newbies at Google Plus, right? At least if you got in recently via a Google Plus invite. At this point I’ve spent a decent amount of time with it and have concluded that Google has finally made a positive mark in social networking. 50 Ideas on Using Twitter for Business We really can’t deny the fact that businesses are testing out Twitter as part of their steps into the social media landscape. You can say it’s a stupid application, that no business gets done there, but there are too many of us (including me) that can disagree and point out business value. I’m not going to address the naysayers much with this. Instead, I’m going to offer 50 thoughts for people looking to use Twitter for business. And by “business,” I mean anything from a solo act to a huge enterprise customer. Your mileage may vary, and that’s okay.

The Complete Guide To Twitter Hashtags For Education What is a hashtag? A word or phrase preceded by a “#.” How do hashtags work? Twitter can be a busy place with lots of tweets–and thus lots of “noise.” A #hashtag is a way to aggregate tweets that are appended with a hashtag. 40 Google+ Tips & Tricks For Power Users July 27, 2011, 8:24 AM — Google+ is all the rage right now. Even under its limited-invite "field trial" phase, the social sharing service is growing in leaps and bounds, with oodles of new users joining every day and even more champing at the bit to get in. Most of us, however, are only beginning to scratch the surface of what Google+ can do; like many Google products, G+ is brimming with advanced features and untapped tweaks. That's why I decided to put together this massive list of Google+ tips and tricks. It includes some of the best power-user pointers I've found both from my own experimentation and from following some really smart folks in the Google+ universe. For more G+ tips and general tech talk, be sure to join me on Google+ as well.

How to use TweetDeck TweetDeck is the most useful application for managing Twitter that I’ve found. While many call it “intuitive,” some of my clients are intimidated by it. Perhaps they don’t realize it has tooltip-type hints when you mouse over the various buttons, or maybe the tips don’t explain enough. For those of you who want more than tooltips, here is a basic introduction to TweetDeck. Organize your screen with these buttons The following nine buttons function as toggles.