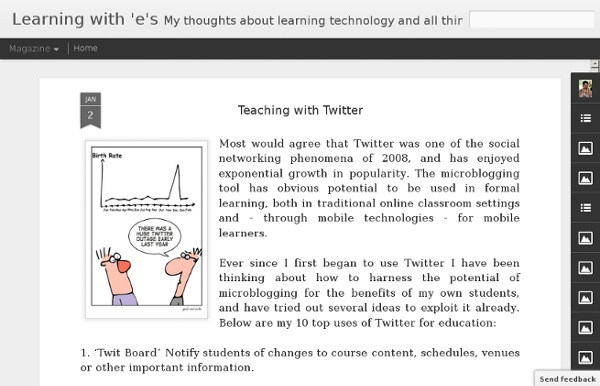 Wearable computing is just one small step up from mobile technology. A large percentage of the world's population is already connected through mobile phones, e-readers, games consoles and tablet computers. The next stage is inevitable - that users begin to wear their tools as jewellery, clothing, eyewear and even as implants. Will 2014 be the year when wearable technology emerges as the next stage in our connected future? Ben Hammersley seems to think so.

Teaching with Twitter: how the social network can contribute to learning I am senior lecturer in English at the University of Wolverhampton and have been an advocate for the past few years of teaching using blended learning - integrating online learning activities alongside face-to-face teaching. Two of my courses on Victorian literature feature a number of assessed online discussion forum activities. They get 100% participation - much of it enthusiastic. AP® Computer Science: Principles If you have any questions, please email Lien Diaz at ldiaz@collegeboard.org. Background and Rationale At a 2008 National Science Foundation-supported conference with the theme of "Computational Thinking and Fluency in the 21st Century," a group of the nation's leading computer scientists and educators agreed that students require increasing skills in computing across all STEM fields. Advancing U.S. students' understanding of the principles and practices of computing is critical to developing a more competitive workforce for the 21st century. Yet the number of students studying computing and computer science at both the high school and college levels has been declining alarmingly — the number of students taking the AP Computer Science Exam fell 15 percent between 2001 and 2007, while the number of college freshmen intending to major in computer science plummeted more than 70 percent this decade. Impetus for Development of Framework and Course

TV Video Production CS5 Production Premium Feature Tour Get breakthrough performance with Adobe CS5 Production Premium, which is packed with innovations that dramatically increase productivity, like native 64-bit support and the new Mercury Playback Engine. Recent Episodes Professors experiment with Twitter as teaching tool Facebook may be the social medium of choice for college students, but the microblogging Web tool Twitter has found adherents among professors, many of whom are starting to experiment with it as a teaching device. People use Twitter to broadcast bite-sized messages or Web links and to read messages or links posted by others. It can be used as a source of news, to listen to what people in certain groups are talking about, or to communicate with experts or leaders in certain fields. Marquette University associate professor Gee Ekachai uses Twitter to discuss what she's teaching in class with students and connect them with experts in the field of advertising and public relations. Instructor Linda Menck, who also teaches at Marquette, encourages students to include social media as a strategy in marketing campaigns for clients. Twitter is helping these professors build community in their classes in a way that appeals to some members of a Facebook-addicted generation.

6 Steps To Becoming A Better Twitter User As I began to build my personal learning network (PLN) I didn’t know a hashtag from a MT. But I knew something exciting was happening for educators on Twitter. The road to a robust PLN begins with the signing up for Twitter – then the journey begins… Who you are - I noticed that I followed people that shared a bit about who they were – and what they are interested in. 50 Ways to Use Twitter in the Classroom Many critics of Twitter believe that the 140-character microblog offered by the ubiquitous social network can do little for the education industry. They are wrong. K-12 teachers have taken advantage of Twitter’s format to keep their classes engaged and up-to-date on the latest technologies.

Trading Assistant Program on eBay What type of items can I send in? Look around your house - the items that sell best on eBay are everywhere: electronics, collectibles, musical instruments, brand name clothing, shoes and handbags...the list is extensive. Valets accept new and gently used items in excellent condition. The Complete Guide To Twitter Hashtags In Education What is a hashtag? A word or phrase preceded by a “#.” How do hashtags work? Twitter can be a busy place with lots of tweets–and thus lots of “noise.” A #hashtag is a way to aggregate tweets that are appended with a hashtag. "Where Do You Learn?": Tweeting to Inform Learning Space Development (EDUCAUSE Quarterly) By Elizabeth J. Aspden and Louise P. Thorpe Emerging technologies and applications can extend traditional approaches to data generation and can be used effectively in institutional planning.