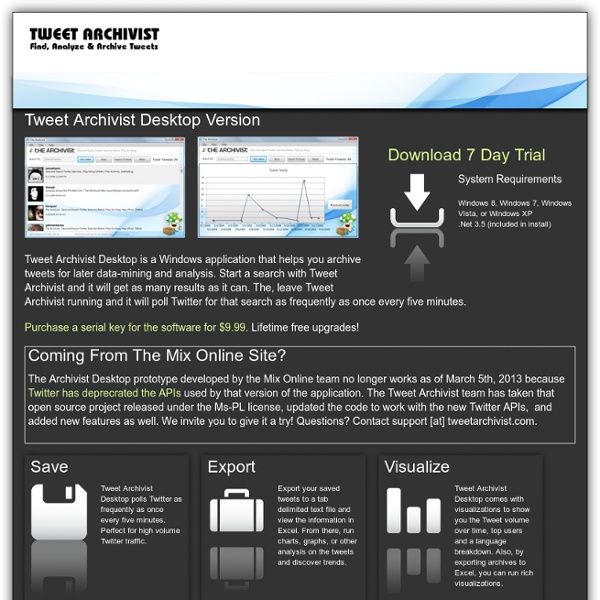 That Can Be My Next Tweet: Generate Tweets Based On Existing Ones - Flock That Can Be My Next Tweet, as the name suggests, helps you generate Twitter status messages. It scans through your existing tweets and generates random messages by combining the words and phrases it finds relevant. You need to enter your Twitter username and click on “get your next tweet” to get the tweet. You may also post it to Twitter directly by hitting the corresponding button. The machine generated tweets, as you would expect, might not make sense (actually it doesn’t most of the time). But it does come up with a nice tweet now and then. Features Tweet Nest Ever thought to yourself that you wish there was some way you could take a look back and see what you tweeted around this time last year? Or perhaps you remember that time you tweeted about that hilarious viral video, and now you can’t find it? By installing Tweet Nest on your own web server, now you can! Features include: Archive Use Tweet Nest to easily store, browse and search amongst your tweets to find exactly what you're looking for, and let others do the same. Backup Additionally, Tweet Nest serves as a backup of your precious tweets on your own server. Media Tweet Nest offers an easier way of viewing your tweets at a glance, as they include thumbnails of media like photos hosted on common providers, such as TwitPic. Customize! Looking for a demo? Installation Tweet Nest is programmed in PHP and requires a MySQL database to work. PHP 5.2 or higher with cURL enabled (or 5.1 with the PECL JSON module installed in addition) MySQL 5.0 or higher Download Tweet Nest Version 1.1 BETA Great!

30 Very Useful Twitter Tools You Must Be Aware Of | SEOptimise - Flock There are numerous ways of using Twitter for everything from business to fun. The key to using Twitter effectively is the use of tools. Without tools, Twitter can be overwhelming and difficult to fathom. There are numerous tools that allow you to sift through this massive resource of latest news, links and gossip. So what are the Twitter tools that really make a difference for advanced Twitter users? I selected just the best of them: 30+ Twitter tools that are most useful right now. Standalone and Web-Based Twitter Clients CoTweet CoTweet is a solid and free web-based Twitter client with some useful CRM features aimed at business users. TweetDeck Sleek Adobe Air desktop client for Twitter offering a good overview with several panes. Seesmic Seesmic is like both CoTweet and Tweetdeck; they have a web-based client and an Adobe Air based app with similar features. twhirl One of the more popular Twitter clients from the early days of Twitter. Misc. Paper.li Ever wanted to publish a newspaper?

Useful Twitter Applications Twitter is everywhere. It's impossible to escape the ubiquitous 140 character microblog. Sure, some people have tried to move to Jaiku or Pownce, begging me to do the same, but until those two applications get as much functionality off their own site as Twitter has, I'm sticking with my Tweets. In order to enjoy Twitter and other microblog applications, they have to be truly portable. In spite of all its shortcomings, Twitter has definitely nailed portability. I've been a plain vanilla Tweeter for a long time. It turns out there are quit a few third party Twitter applications available to download for both PC and Mac, but I was looking for a true web application set, not something else to download. One of the areas in which Twitter is lacking is search functionality. Some other up and coming Twitter search applications include TwitterTroll, an app that lets you search within the actual Tweets to find people who share common interests.

Flock Retweet: Find Out How Many People Retweeted Your Tweets You might have many followers on Twitter, but how do you filter out the passive followers from ones that actually share your message with others? Obviously you need to find out which people on Twitter are retweeting your messages. While this can be an extremely tedious job to perform manually, it can be made much easier with an app called Retweet. Retweet is a user-friendly web app for Twitter clients. Features: A user-friendly web service.Shows who is retweeting your messages the most.Shows which messages of yours have been retweeted the most.A useful tool for analyzing your retweeted messages.Similar tool: TweetMakr.Also read related articles: 2 Ways To Monitor Tweets Within Your Twitter Network and 3 Minimalist Twitter Clients For Mac Users. Check out Retweet @ www.retweet.co.uk

Twitilist TwitQuit: Find Out Who Follows And Unfollows You On Twitter - Flock Remember we talked about Qwitter, a web based app which helps you quit smoking and is fully integrated with your Twitter account ? Today, we’ve got another Qwitter and co-incidentally, this Qwitter has something to do with Twitter too. In fact this could actually be an important Twitter related third party tool out of the myriad Twitter based tools out there. It has a simple user interface and what it does is very simple too. It emails you when someone unfollows you on twitter.