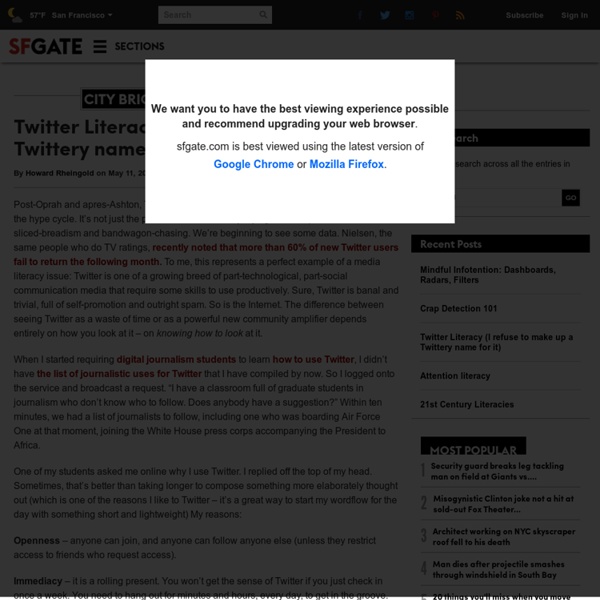 Post-Oprah and apres-Ashton, Twittermania is definitely sliding down the backlash slope of the hype cycle. It’s not just the predictable wave of naysaying after the predictable waves of sliced-breadism and bandwagon-chasing. We’re beginning to see some data. Nielsen, the same people who do TV ratings, recently noted that more than 60% of new Twitter users fail to return the following month. To me, this represents a perfect example of a media literacy issue: Twitter is one of a growing breed of part-technological, part-social communication media that require some skills to use productively. Sure, Twitter is banal and trivial, full of self-promotion and outright spam. When I started requiring digital journalism students to learn how to use Twitter, I didn’t have the list of journalistic uses for Twitter that I have compiled by now. One of my students asked me online why I use Twitter. Immediacy – it is a rolling present. A way to meet new people – it happens every day.

Twitter Hacking Victims Find Stolen Accounts Sold On Black Market Eric Weaver tried logging in to his Twitter account this summer, but he was locked out. A hacker had broken into his account and changed the password. But it didn't end there. With a little digging, Weaver found that his Twitter handle -- @weave -- was being sold in an online forum at HackForums.net. With more digging, he also found that software was being sold online to automate the process of quickly hacking dozens of Twitter accounts. "I was surprised this was all happening so openly," said Weaver, an advertising executive in Seattle.

Should I Say Thanks for Retweets? Yes. When you feel it’s appropriate, go for it. No one likes an arrogant, self-absorbed, asshole (except people like me,oddly enough). Saying thanks is a quick, easy way to connect with new followers or people who enjoyed a post. Some people think saying thanks for retweets clutters up the Twitter stream with noise. I disagree. Twitter as an Enabler of Critical Thinking This is a guest post by Corbette Doyle, a Lecturer in Leadership, Policy & Organizations, and Steph Milne, her TA. In addition to her TA role, Steph recently earned her undergraduate degree and is currently a second-year graduate student in LPO. This Thursday, October 20th, at 4:00 p.m., Corbette and Steph will be discussing their use of social media in teaching as part of Vanderbilt’s “DigitalVU” month. The session will be here at the CFT, and RSVPs are requested. Update: The discussion with Corbette and Steph can be viewed here. The Problem

Twitter Study Reveals the Secret to Getting More Followers After analyzing the Twitter profiles of 36 million users who have generated more than 28 billion tweets (that's 794 tweets per person in three years on average), Beevolve's social analytics research reveals user follower bases directly correlate with how much they tweet. A Twitter user who has written 1 to 1000 tweets has an average of 51 to 100 followers, whereas users who have tweeted more than 10,000 times tend to be followed by 1,001 to 5000 individuals. It's estimated that a person with more than 15,000 tweets has between 100,001 to 1 million followers.

Attention, and Other 21st-Century Social Media Literacies (EDUCAUSE Review © 2010 Howard Rheingold. The text of this article is licensed under the Creative Commons Attribution NonCommercial License ( EDUCAUSE Review, vol. 45, no. 5 (September/October 2010): 14–24 Social Media Statistics For 2012  It was a huge year for Social Media and here is a great infographic that rounds up the key Social Media Statistics to kickoff 2012. It’s pretty impressive to see that Facebook has grown to more than 800 million active users, adding more than 200 million in a single year. Twitter now has 100 million active users and LinkedIn has over 64 million users in North America alone. A few interesting take outs for social media statistics in 2012: Facebook Statistics 2012: An average Facebook user has 130 friends and likes 80 pages56% of consumer say that they are more likely recommend a brand after becoming a fanEach week on Facebook more than 3.5 billion pieces of content are shared

Teens Turn to Social Coding to Protect Privacy on Social Nets In certain teen social circles, it’s considered a subtle act of arrogance, a signifier of the loner, to use a solo photo of yourself for your Facebook profile. Digital natives may have earned their reputation as the “entitlement generation,” but apparently there are some social limits to their unabashed self-regard. In fact, there’s compelling evidence the up-and-coming cohort of young Americans has grown increasingly sophisticated in navigating the public-by-default scene of social networks. Researchers say they are evolving forms of social coding to signal to each other while at the same time keeping their thoughts, activities and personal communications masked from older generations.

Twitter accounts with the most followers worldwide in October 2012 Reading support This statistic presents a ranking of the most popular Twitter accounts as of March 2014, sorted by the highest numbers of followers. During that month, singer Katy Perry's account @katyperry had 51.83 million followers. In comparison, US President Barack Obama's account was followed by 41.85 million people. Celebrities and Twitter Founded in 2006, Twitter is an online social networking and microblogging service that allows users to post text-based status updates and messages of up to 140 characters in length.