BTS' 'Butter' Hits No. 1 on Weekly Hot Trending Songs. Much like "Permission to Dance," "Butter" already has a successful history on Billboard's charts. 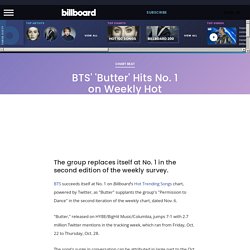 "Butter" spent 10 weeks at No. 1 on the Billboard Hot 100, making it the longest reigning hit this year so far. It also spent two weeks at No. 1 on the Global 200 and five atop Global Excl. U.S. ("Dance" also topped all three tallies). Billboard's Hot Trending Songs charts, powered by Twitter and sponsored by Remy Martin, track global music-related trends and conversations in real-time across Twitter, viewable over either the last 24 hours or past seven days. SEVENTEEN's "Rock With You" debuts at No. 2 on the weekly Hot Trending Songs chart with 2.6 million Twitter mentions. Volvo: safety + salience. Brands on Twitter are finding creative ways to reuse content and keep their messaging fresh.

It’s a challenging time for all of us. 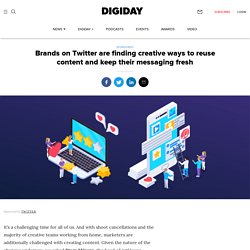 And with shoot cancellations and the majority of creative teams working from home, marketers are additionally challenged with creating content. Given the nature of the changes underway, we asked Stacy Minero, the head of ArtHouse, Twitter’s global team that connects brands with the creative talent of influencers, artists and editors, to give tips on how brands can still make creative that earns attention and drives connection. Stacy: People want to hear from brands, especially if they have something meaningful to say.

The pandemic has driven people to look for reliable, credible information and for ways to do their part and help. 5 Reasons to Use Twitter to Leverage Your Social Listening Campaign. You might think Facebook is the end-all-be-all in brand monitoring. 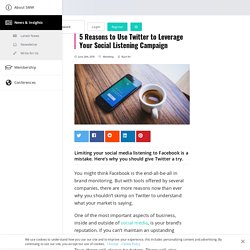 But with tools offered by several companies, there are more reasons now than ever why you shouldn’t skimp on Twitter to understand what your market is saying. One of the most important aspects of business, inside and outside of social media, is your brand’s reputation. If you can’t maintain an upstanding reputation, then the whole house of cards will fall. True, there will always be haters. There will also always be brand ambassadors, if you know what you’re doing and are offering a great product or service. #BestOfTweets. TwitterCounter Twitter Marketing. The Twitter Power User Cheat Sheet - Visual Contenting. How To Get Started With Twitter Video Marketing - CoSchedule Blog. There’s a lot of talk about social media video these days. 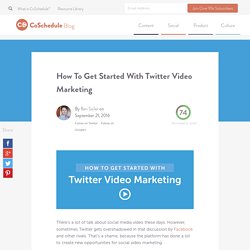 However, sometimes Twitter gets overshadowed in that discussion by Facebook and other rivals. That’s a shame, because the platform has done a lot to create new opportunities for social video marketing. Twitter va diffuser des contenus gratuits sur les principales TV en streaming. First Impressions: When and Why Social Program Engagement Matters. Today’s TV audiences often use social media while watching live series programs, with many authors gathering on Twitter each week while viewing. 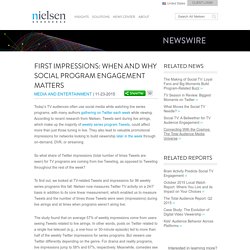 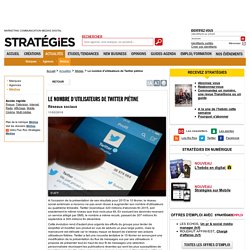 Photos get the Most Engagement on Twitter. Now that every one of the roughly 500,000,000,000 Tweets ever published will be searchable, we wanted to examine a representative sample of 1 million branded Tweets to see what they would look like, and how they engage Followers. 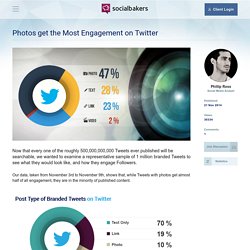 Our data, taken from November 3rd to November 9th, shows that, while Tweets with photos get almost half of all engagement, they are in the minority of published content. That’s right, only 10% of the more than 1 million branded Tweets we analyzed from last week included photos, even though they were by far the most engaging type of content. We looked at the top tier of Tweets in terms of Tweet Engagement. This sample size was dominated by photos. Map Your Twitter Followers. Dive Into The Data: How To Maximise Twitter Targeting Accuracy. According to CMO Survey, 88.5% of CMO’s are expecting data-driven targeting to increase over time. 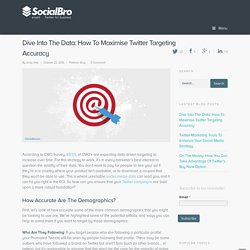 Dive Into The Data: How To Maximise Twitter Targeting Accuracy. Everything You Need to Know That Twitter Announced At Their Annual Conference. Twitter just wrapped up their Twitter Flight annual developer’s conference, announcing a slew of new features, updates, offerings, and opportunities for individuals (not just developers) to use Twitter in new and exciting ways. 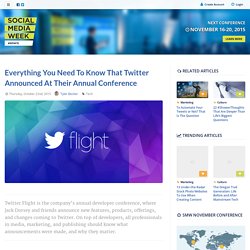 From the newly launched Twitter Polls, to long-awaited API features, there are some important changes coming to Twitter and its users over the next few weeks. If you use Twitter for fun, for work, or just need to stay on top of industry news, here’s everything you need to know. For in-depth updates and news on all things Twitter Flight, you can visit their various company blogs. 1. Have Hashtags Become Irrelevant for Marketers? From the transition of print media to digital, marketers seem to always be constantly adapting to change. 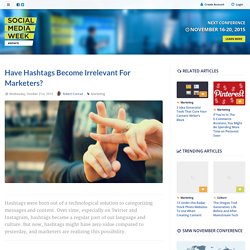 With the huge upswing in social media across all walks of life, marketers once again had to evolve in order to best engage their target audience. Eventually, they discovered that placing a pound sign (#) in front of a relevant keyword would make their Tweet stand out among the crowd and unite other like-minded users. However, as the usage of what became known as a “hashtag” became more widespread among common users, its main purpose became diluted through misuse to the point where there’s speculation that its usefulness is coming to an end. The Hashtag Pizza Pie Is Going Stale. Twitter Making Push Into Video Content with Two Big Announcements. Twitter’s certainly moving at a speed since the appointment of new CEO Jack Dorsey. Following on the heels of the announcement of their new ‘Moments’ offering, the micro-blog giant has today unveiled two significant updates for video on the platform, both of which could provide significant opportunities to marketers and advertisers looking to better reach their Twitter audience.

New Video Upload Options The first is the announcement that users will now be able to upload video content via the Twitter desktop application, with new editing tools built-in to better facilitate the process. On The Money: How You Can Take Advantage Of Twitter’s Buy Now Option. The moment brands have been waiting for is finally here.

Twitter recently announced the availability of its Buy Now button in the US for brands and retailers. To make this a reality, Twitter integrated with major ecommerce platforms Shopify, Bigcommerce, Stripe and Demandware. Twitter donne accès à tous les « tweets » émis depuis 8 ans - Les Echos. Travelers Can Now Pay For Flights Via Social Media. Twitter Testing Major Profile Redesign That Looks a Lot Like Facebook. Twitter is testing a major profile redesign that's very reminiscent of Facebook and Google+. Mashable assistant features editor Matt Petronzio spotted on Tuesday a huge update to his Twitter profile page, with the main picture and bio scaled to the left and significantly more real estate dedicated to the header photo.

The revamped tweet stream is also a departure from its signature look. There is a greater focus on photos and content cards. It moves away from a strictly vertical timeline too. Click the image below to enlarge. Twitter Search — BackTweets. Top 10 Most Popular Languages on Twitter [CHART] While English is the most popular language on Twitter, it may surprise you that the majority of published tweets are not in the mother tongue of the company's founders. Just over one-third (34%) of all tweets were in English in September. With 16%, Japanese is the second-most popular language on the microblogging network, while Spanish clocks in at third place. Created by Statista, the chart, below, shows the 10 most popular languages on Twitter. Twitter. Twitter accounts with the most followers worldwide in October 2012. Reading support This statistic presents a ranking of the most popular Twitter accounts as of March 2014, sorted by the highest numbers of followers.

During that month, singer Katy Perry's account @katyperry had 51.83 million followers. In comparison, US President Barack Obama's account was followed by 41.85 million people. Social Media Statistics For 2012  It was a huge year for Social Media and here is a great infographic that rounds up the key Social Media Statistics to kickoff 2012. Latest Twitter usage statistics: a mixed bag of growth. Twitter Study Reveals the Secret to Getting More Followers.

Twitter Hacking Victims Find Stolen Accounts Sold On Black Market. Eric Weaver tried logging in to his Twitter account this summer, but he was locked out. A hacker had broken into his account and changed the password. But it didn't end there. Twitter Literacy (I refuse to make up a Twittery name for it) Post-Oprah and apres-Ashton, Twittermania is definitely sliding down the backlash slope of the hype cycle. It’s not just the predictable wave of naysaying after the predictable waves of sliced-breadism and bandwagon-chasing. We’re beginning to see some data.