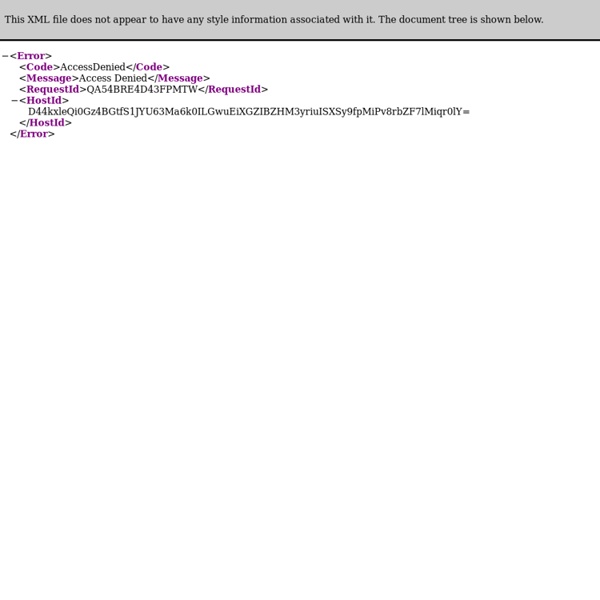 Inc. Announces Fourth Quarter and Full Year 2011 Financial Results (NASDAQ:OPEN) , /PRNewswire/ -- (NASDAQ: OPEN), a leading provider of free, real-time online restaurant reservations for diners and reservation and guest management solutions for restaurants, today reported its financial results for the fourth quarter and fiscal year ended . (Logo: ) reported consolidated net revenues for Q4 2011 of , a 21% increase over Q4 2010. Consolidated net income for Q4 2011 was , or per diluted share. Non-GAAP consolidated net income for Q4 2011, which excludes tax-affected stock-based compensation expense and tax-affected amortization of acquired intangibles, was , or per diluted share. provides operating results by geography as the Company is at different stages of development in its and International operations.

Salesforce.com Wants Developers To Think Big - Cloud-computing - With Identity and Canvas plans, Salesforce can begin to provide services to enterprise applications that were thought to have been totally separate from CRM. 10 Cloud Computing Pioneers (click image for larger view and for slideshow) Cloud vendors understand how important developers are to their future, and they compete for developer loyalties by integrating open source tools with their environments. Red Hat's OpenShift Enterprise is a leading example, as well as VMware's Cloud Foundry and Spring Framework.

Part 3: An Email Marketing Plan Template Welcome to the third lesson in the email marketing series. Today, we'll set up a template email marketing plan (one that is simple to follow and understand) before diving headfirst next lesson into a bunch of advanced email marketing strategies and tactics. Last time, I started off with saying that people shy away from email marketing because they don't know how to do it.

Hell No, Tumblr Users Won’t Go To Yahoo! We’ve all by now heard about how Yahoo is trying to get some “cool” with a supposed $1 billion purchase of hip blogging platform Tumblr, but it may be a moot point if Tumblr’s users fail to stick around post-sale. Microsoft and Facebook may be trying to make a move ahead of Yahoo, Tumblr may be inching ever closer to running out of cash, and (despite that) may not be afraid to play a little hardball. But here’s something you’re not hearing much about: Tumblr’s users are almost universally unhappy with the news that the site might get sold to Yahoo.

Restaurant Reservation Service LaFourchette Sticks Its Fork Into $10.5M The European online restaurant reservation service LaFourchette announced that it has raised €8 million ($10.5 million) from Serena Capital and Partech at a valuation of more than €50 million ($65.8 million). This funding will be used to consolidate its leading position in Europe. New country-specific websites are said to launch soon. Analysis: Salesforce.com takes a leaf out of Facebook - 12 Oct 2012 Salesforce.com CEO Marc Benioff has boldly claimed that his company’s strategy is to attempt to create “the Facebook for the enterprise”. Presumably his vision is based on the popularity of Facebook at its peak rather than the post-IPO Facebook that shareholders are shying away from – but does it make any sense? At the firm’s premier event, Dreamforce in San Francisco, Benioff openly stated his desire to look at Facebook as a template for an enterprise platform and defended his vision during a Q&A session. “What we see is that Facebook is the most popular application on the planet.

30 Places to Find Open Data on the Web Finding an interesting data set and a story it tells can be the most difficult part of producing an infographic or data visualization. Data visualization is the end artifact, but it involves multiple steps – finding reliable data, getting the data in the right format, cleaning it up (an often underestimated step in the amount of time it takes!) and then finding the story you will eventually visualize. Following is a list useful resources for finding data.

Tumblr Community Responds to Yahoo Bid Facebook Twitter Google+ Save E-mail Share Print Stop me if you’ve heard this one before. A social media Web site sells to a large company that then plans to make money by placing ads against users’ content. Urbanspoon’s restaurant booking service growing fast, reservations up 325% this year 1 November '11, 12:50pm Follow One of the earliest iPhone apps to make a name for itself in restaurant recommendations with its trademark fruit machine slots-type interface, Urbanspoon also offers a service called Rezbook, which allows restaurant owners to manage bookings from Urbanspoon users via an iPad app. Today, the Seattle-based startup has announced that 1000 restaurants have signed up to the service, while online reservations processed by Urbanspoon have increased by 325% since January this year.

Highlighting 1 of the Most Incredible CEOs in Tech Today The Motley Fool's readers have spoken, and I have heeded your cries. After months of pointing out CEO gaffes and faux pas, I've decided to make it a weekly tradition to also point out corporate leaders who are putting the interests of shareholders and the public first, and are generally deserving of praise from investors. For reference, here is last week's selection. This week, I want to take a closer look at the CEO of salesforce.com (NYSE: CRM ) , Marc Benioff, and show you why a mixture of growth, humility, and community makes him a great leader.

Which Content Marketing Tactics Get the Best ROI? In an environment in which consumers’ attention is increasingly fragmented, the idea of using content to capture interest and engagement is catching on among marketers. Compelling content can help marketers tell a story, but it can also be cumbersome—and expensive—to create. So which content strategies are generating attractive return on investment (ROI) for marketers? The most cost-effective content types are articles, video and white papers, according to a January 2013 study of marketing decision-makers worldwide conducted by CopyPress, a software company specializing in content marketing tools. In particular, marketers were most widely satisfied by the ROI from featured articles, with 62.2% saying they provided some of the best content ROI.

Can Yahoo Ignore Tumblr's Dark Side? When my daughter begged me a few years ago to go on Tumblr so she could engage with Harry Potter fandom, I said no. I was worried about what else she might encounter on the vast blogging service. You know what I’m talking about. I feared she’d stumble onto porn. Tumblr, which Yahoo is buying for $1.1 Billion is not a porn site, far from it. According to CHD Expert Independent Full Service Restaurants in the USA Outnumber Major Chains Eight to One. Chicago, IL (PRWEB) April 19, 2012 CHD Expert is America’s leader in collecting, managing and analyzing data in the away from home foodservice market, and they expect independently owned full service restaurants to continue to hold strong during tough economic times. If you think that Chili’s, IHOP and Applebee’s are taking over the full service restaurant (FSR) industry, think again. Independent FSR locations across the United States outnumber the major chains by eight to one (Source:1). This is a bit surprising, as our streets and highways are seemingly lined with major chain restaurants. Still the independently owned FSR operators are holding their own during the worst of economic conditions and increased encroachment from the major chains.

Automakers tap internal social enterprise tools to mine employee expertise About 31,000 GM employees reach out to colleagues around the world on the network's growing GM OverDrive network. Thought Leadership Ford's marketing team ran across a potentially costly dilemma while planning the Summer of Taurus, a multicity promotional tour in 2009 for the 2010 Taurus. The team wanted to integrate a list of events from one online application with a map from Bing Maps so fans could track the tour from city to city. The team could have contacted an outside agency to handle the project, but that would have cost Ford thousands of dollars, recalled Scott Monty, Ford's head of social media. So team members first looked internally and presented their problem on Yammer -- a so-called social enterprise network that the automaker uses so employees can share ideas among themselves on a private, Ford-dedicated platform.

The one new nugget here is a Hastings prediction, held by many other people, that we’re moving to a world where “apps replace channels.” Hastings mentions apps nearly 3 dozen times in his essay, and makes it clear that he sees Netflix first and foremost as an app provider. Hastings figures that lots of other video services will figure the same thing out. And he goes out of his way to mention others that are already there or close to it, citing ESPN, HBO and the BBC. But those who don’t get it are screwed, he says: “Existing networks, such as ESPN and HBO, that offer amazing apps will get more viewing than in the past, and be more valuable. Existing networks that fail to develop first-class apps will lose viewing and revenue.” In the past, Netflix has tacked back and forth on whether it is competing head to head with HBO. Now Hastings is back in “we’re coming for you” mode: “The network that we think likely to be our biggest long-term competitor-for-content is HBO … They have global reach and strengthening technology capacity.” But while Netflix now has as many U.S. subscribers as HBO — and while Hastings thinks he can eventually double or triple his current 30 million — he figures it will take him a while to truly compete with HBO. “While we are passing HBO in domestic members in 2013, it will be several years before we are peers with them in terms of Original programming, Emmy awards, and international members. It wouldn’t be surprising to us if HBO does their best work and achieves their highest growth over the next decade, spurred on by the Netflix competition and the Internet TV opportunity.” But Hastings also reiterates his argument that there’s room for lots of streaming video services, just like there are lots of cable channels today. Translation: Don’t worry, Jeff Bewkes: Just because we’re coming for you doesn’t mean we’ll crush you. Also, please keep selling us Time Warner’s content! Thanks! Hastings also continues to offer olive branches to the entrenched cable guys, especially those that also sell broadband: “At times we have worried about the strategic motivations of ISPs that are also MVPDs, but the absence of cord-cutting has mitigated this concern. … Internet video services like Netflix, MLB.tv, iTunes and YouTube are not currently a material strategic problem for companies that are both an ISP and an MVPD.” Translation: Hey Comcast, Time Warner Cable, Verizon! It would be pretty cool if we figured out a way for you guys to bundle us along with your other video services! Let’s (continue to) talk! by jesran1991 Oct 2