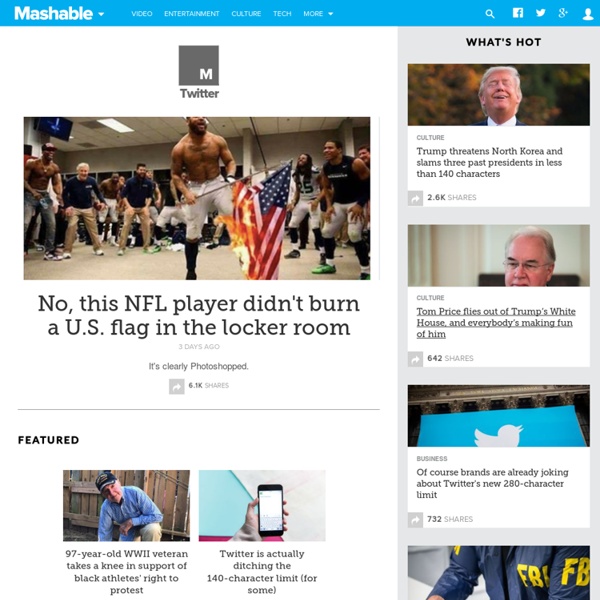 Women Win Facebook, Twitter, Zynga; Men Get LinkedIn, Reddit [INFOGRAPHIC] When it comes to the sexes on social media, there are a few places where the battle lines seem settled. It probably won't surprise you to learn, for example, that men are from Google+ and women are from Pinterest. But when it comes to the two dominant social networks — Facebook and Twitter — you may be shocked to discover that women are now in the majority on both services. Not only that, but they're posting far more frequently on Facebook than their slowpoke male counterparts can manage. Online gaming, once a bastion of men, has fallen to the females as well. But take heart, guys. Check out this infographic for more details, including the one social network where the gender distribution is equal.

Twitter Testing Major Profile Redesign That Looks a Lot Like Facebook Twitter is testing a major profile redesign that's very reminiscent of Facebook and Google+. Mashable assistant features editor Matt Petronzio spotted on Tuesday a huge update to his Twitter profile page, with the main picture and bio scaled to the left and significantly more real estate dedicated to the header photo. The revamped tweet stream is also a departure from its signature look. There is a greater focus on photos and content cards. It moves away from a strictly vertical timeline too. Click the image below to enlarge. It's common for Twitter to quietly test new features and design updates before tweaking or rolling it out to a larger user base. Under the header photo in the test is the count for tweets, photos/videos (a new category called out on the profile), who you are following, followers, favorites and lists. Other profile pages viewed from an account with the new design are automatically made to look like this too. The company declined to comment on this story.

Multi Platform Social Media – diagram-by-diagram Over the years I have been creating lots of confusing, busy yet at the same time, meaningful and insightful emergent media diagrams. These attempt to help the uninitiated heritage media folk, get to grips with a multiplatform, shifting-social-media-sands, transmogodified entertainment landscape…breathe. So I have been uploading a bunch of these diagrams onto my flickr account over the past weeks, partly to make them more accessible to me too (oh the joys of the cloud) but with the creative commons tag, for all and sundry to use (attributed of course – the only way to power & fame nowadays – cackles!). Here is a short selection of the 25 or so already up, with brief descriptions – the main bunch is in a set called ‘Emergent Media’ here. The above diagram is intended to help storytellers simply understand a range of key places to distribute their story fragments or triggers online. The above is one of my favourite diagrams from way back in early 2006.

• Twitter accounts with the most followers worldwide in October 2012 | Ranking Reading support This statistic presents a ranking of the most popular Twitter accounts as of March 2014, sorted by the highest numbers of followers. During that month, singer Katy Perry's account @katyperry had 51.83 million followers. Celebrities and Twitter Founded in 2006, Twitter is an online social networking and microblogging service that allows users to post text-based status updates and messages of up to 140 characters in length. In order to establish authenticity of identity on Twitter, accounts of people from high-interest areas such as music, fashion, entertainment, politics, media, business or other areas as well as individuals at high risk of impersonation are verified by Twitter. Twitter provides a near-instant access channel to celebrities. Major sporting events and industry award shows such as the Grammy or Academy Awards generate lots of online buzz on Twitter.

Social media: A guide for researchers Social media is an important technological trend that has big implications for how researchers (and people in general) communicate and collaborate. Researchers have a huge amount to gain from engaging with social media in various aspects of their work. This guide has been produced by the International Centre for Guidance Studies, and aims to provide the information needed to make an informed decision about using social media and select from the vast range of tools that are available. One of the most important things that researchers do is to ﬁnd, use and disseminate information, and social media offers a range of tools which can facilitate this. Social media can change the way in which you undertake research, and can also open up new forms of communication and dissemination. Web materials 1: Links and resources You can access the full list of the above resources here, or download below. Web materials 2: Researcher case studies

Social Media Statistics For 2012  It was a huge year for Social Media and here is a great infographic that rounds up the key Social Media Statistics to kickoff 2012. It’s pretty impressive to see that Facebook has grown to more than 800 million active users, adding more than 200 million in a single year. Twitter now has 100 million active users and LinkedIn has over 64 million users in North America alone. A few interesting take outs for social media statistics in 2012: Facebook Statistics 2012: An average Facebook user has 130 friends and likes 80 pages56% of consumer say that they are more likely recommend a brand after becoming a fanEach week on Facebook more than 3.5 billion pieces of content are shared Twitter Statistics 2012: 34% of marketers have generated leads using Twitter55% of Twitter users access the platform via their mobile General Social Media Statistics 2012: Check out more social media statistics for 2012 below in the full infographic, via Mediabistro. Be Sociable, Share!

Why does information flow in networks? People like Barry Wellman and Caroline Haythornthwaite have contributed significantly to advancing the analysis of the impact of networks on society. Well before Barabasi, Watts, and Strogatz arrived on the network scene, sociologists (and social psychologists) such as Granovetter, Wellman, and Milgram were developing models to understand how people connect. As a result of this work, terms like “six degrees” and “strong/weak ties” and “networked communities” have become mainstream. With an understanding of how people are connected we can also gain insight into how information flows through a network. I’m sure you’ve seen analysis of the social networks of board of directors at different companies. Valdis Krebs addresses this in Overlapping Networks: It is usually beneficial to be connected to those who have a good view of what is going on. Basically, our position in a network, and the overlap with other networks, influences the type of information and people that we can access. 2. 3.

Twitter Study Reveals the Secret to Getting More Followers After analyzing the Twitter profiles of 36 million users who have generated more than 28 billion tweets (that's 794 tweets per person in three years on average), Beevolve's social analytics research reveals user follower bases directly correlate with how much they tweet. A Twitter user who has written 1 to 1000 tweets has an average of 51 to 100 followers, whereas users who have tweeted more than 10,000 times tend to be followed by 1,001 to 5000 individuals. It's estimated that a person with more than 15,000 tweets has between 100,001 to 1 million followers. Beevolve's report, called "An Exhaustive Study of Twitter Users Around the World," takes a look at users' demographics, follower stats, gender preferences, favorite keywords and smartphone/app preferences. SEE ALSO: 15 Twitter Accounts Every Space Lover Should Follow It turns out the average Twitter user is an English-speaking 28-year-old woman with about 208 followers. What's the most surprising thing this study reveals?

Twitter Hacking Victims Find Stolen Accounts Sold On Black Market Eric Weaver tried logging in to his Twitter account this summer, but he was locked out. A hacker had broken into his account and changed the password. But it didn't end there. With a little digging, Weaver found that his Twitter handle -- @weave -- was being sold in an online forum at HackForums.net. "I was surprised this was all happening so openly," said Weaver, an advertising executive in Seattle. Weaver's experience is not unique. This week, Twitter user Daniel Dennis Jones detailed in a Storify post how his Twitter account -- @blanket -- was hacked, stolen and put up for sale on the black market. Experts say the underground market for Twitter accounts and the apparent ease with which they are stolen raises questions about security at the popular micro-blogging site. “Why is Twitter not doing that?” Twitter did not respond to repeated requests for comment. Such software -- known as a “Twitter cracker" -- can be easily purchased online. “They’re just bored kids,” he said.

Infographic: The Astounding Power Of Pinterest In our upcoming October design issue, one of the many fascinating feature stories we’ve lined up is a lengthy profile of Pinterest and its elusive CEO, Ben Silbermann. That story goes live later this week, but until then, I wanted to offer a teaser, in the form of an infographic about Pinterest, created by Fast Company's staff and designed by our own Ted Keller. In this profusion of figures, you find out a few, key things about the image-sharing service. For one, it’s dominated by women. Second, something about its layout and culture stokes an enormous buying impulse. Click to enlarge. Due to a fact-checking error, this article previously included Dribbble in the chart of companies inspired by Pinterest’s grid layout.