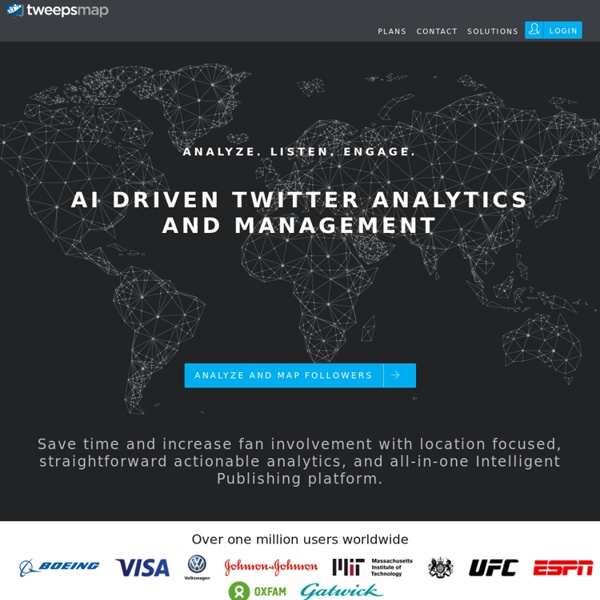 Twitter Making Push Into Video Content with Two Big Announcements Twitter’s certainly moving at a speed since the appointment of new CEO Jack Dorsey. Following on the heels of the announcement of their new ‘Moments’ offering, the micro-blog giant has today unveiled two significant updates for video on the platform, both of which could provide significant opportunities to marketers and advertisers looking to better reach their Twitter audience. New Video Upload Options The first is the announcement that users will now be able to upload video content via the Twitter desktop application, with new editing tools built-in to better facilitate the process.

Twitter Tools for Community and Communications Professionals inShare5 Twitter is nothing short of a phenomenon. At the very least, it connects people to each other through a rich and active exchange of ideas, thoughts, observations, and vision in one, highly conducive ecosystem (known as the Twitterverse). The social fibers that weave together this unique micromedia network is strengthened by the expertise, respect, trust, admiration, and commonalities. Montreal Gets Free “Take A Book Leave A Book” Street Libraries News The city's first official set of Little Free Libraries. Bookworms of Montreal now have a new resource to get their hands on new books, all for free, thanks to Little Free Library. An initiative already seen in other cities, Little Free Library is basically a street-level book stand/deposit where any and everyone can take a book or put one in, all free of charge. Lynda Drouin is to be thanked for the city’s new literary initiative, who first set up a Little Free Library in front of her house in Rosemont. Twelve have since been set up, offering free reading material to all Montrealers who happen to walk by.

Twitter Marketing Tools and Twitter Strategies to Boost Business Results Here's why. You see, the amount of information you can add to your Twitter profile is limited. For example, a Twitter bio only allows 160 characters max. Make no mistake that its important to fill out the profile information.

So you want to tweet with kindergarten... Welcome! Please visit the updated version of this post here: So, based on the response I have had to my recent media exposure, it seems that another how-to post is in order. On The Money: How You Can Take Advantage Of Twitter’s Buy Now Option The moment brands have been waiting for is finally here. Twitter recently announced the availability of its Buy Now button in the US for brands and retailers. To make this a reality, Twitter integrated with major ecommerce platforms Shopify, Bigcommerce, Stripe and Demandware. This only means great things are about to happen!

How to Turn Twitter Into a Dashboard-Style Web App This is a screenshot of Twitter. No gimmicks, no PhotoShop. (Click to enlarge.) I’ll show you a simple way to turn your experience on Twitter.com into one very similar to most Twitter web applications out there, such as Tweetdeck, Seesmic or Hootsuite. Some may prefer this solution since you will have access to all of your Twitter data – your profile, your followers, your settings, your lists and searches – all in one place.

Harper’s Hail Mary: Fighting an election on terrorism More from Paul Adams available here Can the prospect of terrorism save Stephen Harper? If you had doubts about whether the Harper government intended to make terrorism and the mission against Islamic State an election issue, they should have been resolved on Monday. In St-Jean-sur-Richelieu, police were still examining the crime scene where a driver had mowed down two soldiers. BlastFollow! This application will allow you to search for Twitter users based on a keyword. It will then return the number of users who have tweeted that keyword recently. You will have the option to follow all of those users en masse, which is a really efficient way to follow people who share your interests on Twitter. Learn more.

Twitter launches major redesign Twitter rolled out a major redesign that revamps some of its biggest features and includes new apps for iOS and Android, in a bold attempt to make itself more relevant--not to mention more attractive to advertisers. The main idea behind the redesign is to fundamentally change how users will access their most important tweets and the most significant information they convey. For instance, Twitter has decided to link its service to the notion of "home," and to try to rebrand the hashtag--one of its users' most ingenious inventions--as the "discover" tool. At the same time, Twitter is launching its first branding pages in an attempt to steal some of Facebook's thunder with advertisers.

Have Hashtags Become Irrelevant for Marketers? From the transition of print media to digital, marketers seem to always be constantly adapting to change. With the huge upswing in social media across all walks of life, marketers once again had to evolve in order to best engage their target audience. Eventually, they discovered that placing a pound sign (#) in front of a relevant keyword would make their Tweet stand out among the crowd and unite other like-minded users. However, as the usage of what became known as a “hashtag” became more widespread among common users, its main purpose became diluted through misuse to the point where there’s speculation that its usefulness is coming to an end. The Hashtag Pizza Pie Is Going Stale In the past, marketers would create a hashtag to accompany Tweets regarding their particular product or service, which many Twitter bots and fake accounts would ReTweet.