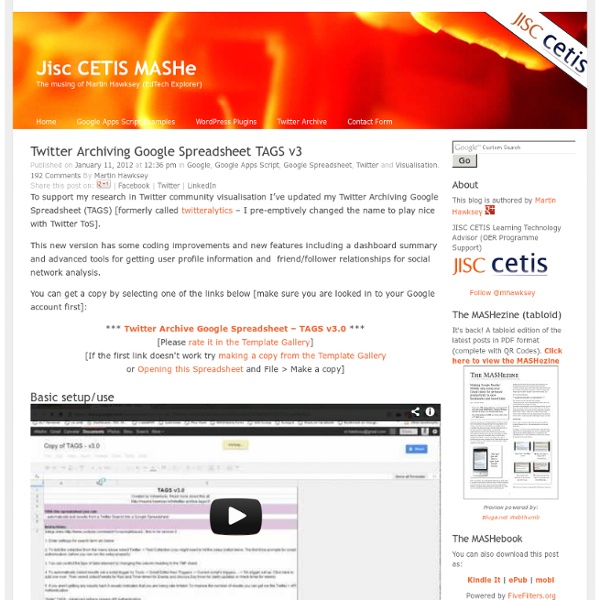 Important: Changes to Twitter API Because Twitter are making changes to their API this version of TAGS will stop working in March 2013. TAGSv5.0 is compatible with the new API and you should get it here! For existing TAGS users: What will happen to my existing TAGS sheets? When Twitter turn off the old API (test outages this March) all authenticated and unauthenticated search requests will stop working. How do I upgrade my existing version of TAGS? As I can’t push an update to existing copies of TAGS you’ll have to manually update by opening your spreadsheet, then opening Tools > Script editor… and replacing the section of code that starts function getTweets() { and finishes 134 lines later (possiblly with the line function twDate(aDate){ ) with the code here. To support my research in Twitter community visualisation I’ve updated my Twitter Archiving Google Spreadsheet (TAGS) [formerly called twitteralytics – I pre-emptively changed the name to play nice with Twitter ToS]. Basic setup/use

HOW TO: Archive Twitter Search Results in a Google Spreadsheet (and Analyze Them!) - YouMoz I find Twitter the most essential social media tool for Internet Marketers on many levels, mainly because of its search API. Unlike Facebook's and Google Plus's non-existent search options, Twitter makes it easy to go through the huge amounts of updates being published every minute and find those which are relevant (and important) to your brand. Twitter search is priceless for various tasks: Track updates from any niche conference or event (through the official hashtag). In this particular case, archiving is very essential because your archive will let you find testimonials for your next event or quotes for your event coverage, etc. The free Google Spreadsheet I am reviewing in this article can help you with all the above tasks: it collects tweets, archives them and lets you analyze them! Twitter Archive in Google Docs: Setting Up Twitter Archive is not that easy to set up, but it has some awesome functionality. Here's how I got it started: You'll love it! But wait! 1. 2.

Twitter project: Library of Congress to archive EVERY tweet ever made By Daily Mail Reporter Updated: 07:33 GMT, 8 December 2011 Billions of tweets will be archived, including the very first - sent by Twitter co-founder, Jack Dorsey If you were thinking that tweet you just sent would soon disappear into the ether, you couldn't be more wrong. It will soon be stored alongside Thomas Jefferson's draft of the American Declaration of Independence and a Gutenberg Bible. That's because every public tweet sent since Twitter was launched five-and-a-half years ago is to be be archived by America's national library. The Library of Congress announced the deal with Twitter last year, but yesterday its digital initiatives manager shone more light on the project. 'We have an agreement with Twitter where they have a bunch of servers with their historic archive of tweets, everything that was sent out and declared to be public,' said Bill Lefurgy when he appeared on Federal News Radio's Federal Drive show yesterday. Innovative: The first-ever Tweet was sent on March 21 2006

That plan to archive every tweet in the Library of Congress? Definitely still happening A little more than two years ago, the Library of Congress announced it would preserve every public tweet, ever, for future generations. That’s right. Every public tweet, ever, since Twitter’s inception in March 2006, will be archived digitally at the Library of Congress. That’s a LOT of tweets, by the way: Twitter processes more than 50 million tweets every day, with the total numbering in the billions. Fifty million tweets a day. We hadn’t heard about this project in some time. False, said Library spokeswoman Jennifer Gavin; the project is very much still happening. “The process of how to serve it out to researchers is still being worked out, but we’re getting a lot of closer,” Gavin told me. The Library first revealed its plans in a tweet on April 14, 2010, but apparently that was before sorting out with Twitter the logistics of acquiring all that data. “We began receiving the material, portions of it, last year. The challenge now is finding ways to refine the raw data in useful ways.

How to archive your tweets on Twitter to Google Docs, Evernote and others There’s no doubting Twitter’s role as one of the most important communication engines of our time, yet the service offers sub-standard search and no method by which its 140 million plus users can access their archived tweets (save for knowing a tweet’s exact URL). Several third-party services exist that allow Twitter users to “push” their own tweets to other services like Dropbox or Evernote for archival purposes using Twitter’s condensing API – for now. Tomorrow, one of the most used services for archiving tweets, IFTTT, among other uses, will no longer offer Twitter ‘triggers’ that push tweets to other places around the web. IFTTT’s CEO Linden Tibbets stated that the removal of this functionality comes as a direct result of recent changes to Twitter’s API and stricter enforcement of its developer recommendations-turned-rules. With IFTTT no longer available for the task as of tomorrow, we’ve been searching for some great Twitter archiving alternatives. Create a free Zapier account Finish

All The Old Tweets Are Found: Google Launches Twitter Archive Search Google has launched a Twitter archive service, giving it a more comprehensive index of tweets over time than even Twitter itself. (See Danny’s Where Have All The Old Tweets Gone?) Meanwhile, Twitter gets a logo presence in Google’s search results, the first time Google’s featured a partner like this. The Google blog has details here. The new Twitter archive search allows users to enter any keyword or phrase and see what was being said on Twitter about it over time or on a particular day (and even a particular hour or minute during that day). This allows users to drill down to any point in time and “replay” what was being said on Twitter about any person, place or event. There’s value here on several levels, including fairly obvious cultural and historical interest. Here’s an example for “Health Care Reform” (by year, month, day, minute):

Twitter Is Working on a Way to Retrieve Your Old Tweets Trying to remember that pithy, brilliantly composed tweet about the latest Wes Anderson movie that you fired off a few months ago? You’re out of luck: Twitter gives users access only to the last few thousand posts made to the site. But Dick Costolo, Twitter’s chief executive, promises that this will eventually change. “We’re working on a tool to let users export all of their tweets,” Mr. Costolo said in a meeting with reporters and editors at The New York Times on Monday. Other social media services, most notably Facebook, already allow users to download a file with all their data. But as Twitter has grown in popularity and evolved into a real-time news feed and communication tool for many of its 140 million active users, the demand for a way to reach back in time and trawl through the thousands of messages they have posted to the site has become high enough that Twitter executives decided to devote some of its engineers to building a solution.

Twitter Inching Closer To Giving You All Your Tweets, But Search Has A Long Way To Go Twitter is working on a project that will give users access to an archive of all of their own tweets. Twitter CEO Dick Costolo told the New York Times this week that the company is building a tool that would let Twitter users download their own tweets. He didn’t provide a timeframe for such a tool to be ready. Twitter search is notoriously shallow. With users tweeting more than 400 million times per day, a full-history, all-Twitter search/download tool may not be feasible from an engineering standpoint. It’s two different search problems. So, don’t hold your breath waiting for a way to search or download a full history of tweets from anyone except yourself. A tool that gives us access to all of our own tweets would be a step in the right direction, but it highlights how poor the overall state of Twitter search is today — historical search, that is. Google & Bing (Yandex, Too) Topsy But like the other options, it’s far from comprehensive. Library of Congress Oldtweets