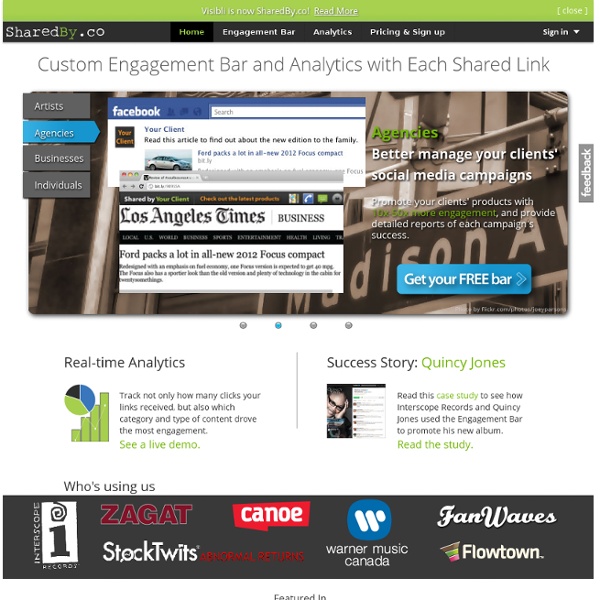 Complete Guide To Facebook Features In Skype 5.5 Beta The latest Skype 5.5 beta for Windows now comes with all new features and enhanced Facebook integration options. One of the major additions in Skype 5.5 includes a new Facebook tab, which is designed to deliver easy access to your Facebook stream, write status updates, allow adding comments, and chat with your Facebook contacts. Calling Facebook friends is now as easy as ever, you can directly call a Facebook contact if he/she has added a phone number to a Facebook profile. In this post we will provide a detailed guide regarding the use of Facebook features in Skype 5.5

The Future of Social Media Monitoring - ReadWriteWeb Ten years ago the ClueTrain manifesto said that "markets are conversations" but today a more pertinent statement could be that conversations are becoming markets - or that there's a market for monitoring conversations. A whole class of technologies are emerging to help companies keep track of the conversations exploding online. The web moves fast enough that we may as well start looking at what comes next. Easy to use and affordable tools like Radian6 and ScoutLabs that track blog and twitter mentions are a given - but what kinds of crazy innovations can we hope for in the future? To be sure some of the future will be frighteningly intrusive and creepy; we've argued that the present state of the art in social media monitoring already is.

Humanising Language Teaching Magazine for teachers and teacher trainers Adam John Simpson, Turkey Adam John Simpson has been living and teaching in Turkey for ten years, all of that time spent in the tertiary education sector in universities in Istanbul. His interests include corpus linguistics, having been involved in the development of the Sabancı University School of Languages vocabulary syllabus, and in the development of oral skills. E-mail: adams@sabanciuniv.edu 10 Tools To Make The Most Of Twitter Living without Twitter is something that I couldn’t imagine anymore. The amount of great people that I have met through there is just incredible. What I appreciate the most is the large number of targeted people you can reach interested in the same topics as you.

Social Media Policies Database Here is my collection social media policies. I initially gathered a big collection while trying to formulate my own policy. That collection grew over the years to include a variety of industries, types of companies (public or private), industry and approach to social media (proactive, prohibitive or neutral). Topsy - Real-time search for the social web With iOS 9, Search lets you look for content from the web, your contacts, apps, nearby places, and more. Powered by Siri, Search offers suggestions and updates results as you type. There are two ways to use Search on your iOS device. Quick Search Drag down from the middle of the Home screen and type what you're looking for. Siri Suggestions Using Google Spreadsheets to extract Twitter data Posted November 20, 2009 in How-to, twitter | 24 Comments so far Last weekend I was looking for ways to extract Twitter search data in a structured, easily manageable format. The two APIs I was using (Twitter Search and Backtweets) were giving good results – but as a non-developer I couldn’t do much with the raw data they returned.

3 Tools to Create New Facebook iFrame Pages March 10 was a big day for Facebook Page owners. On that day, Facebook upgraded Pages to a new layout and removed FBML — Facebook Markup Language — as the custom-tab-creation code, replacing it with iframes. The latter action spelled trouble for do-it-yourselfers because it required them to learn how to create Facebook apps, which are required for iframes. The switch to iframes created another problem. Many page owners used a function called “fangating,” which required visitors to “Like” the page before they could take advantage of certain features.

The Most Complete Twitter Application List Available - 2011 Edition I believe this is the best, most complete and accurate list of valuable Twitter applications available on the internet right now. To be fair, I absolutely have merged and plagiarized other older and outdated lists that I found (the larger ones are credited below). However, I spent a good deal of time to clean out the dead applications, delete the apps that were overly quirky or being developed, focus more on the apps that increase productivity, and add in many of the new great apps that have come out over the past six months - particularly in the productivity / business apps section where my primary interest lies. I have also tagged the tools that cost money / have a premium option ($) as well as if they have a valuable free option (F/$).

30+ New &amp; Free Web Tools You Should Know – 2009 Edition Roughly a year ago I published a list of not yet popular web tools you should know here on SEOptimise. It’s the most popular post on this blog ever since. While I considered updating the list I decided to compile a new one with a new generation of tools instead of just fixing broken links: 25 new & free Web tools you should know – 2009 edition This is of course a biased list of Web tools (both web based tools or tools for the Web), my own one, but it is fueled by my business blogging, social media optimization and SEO practice so you’ll probably like it as well. Some of these tools are not really new but they are probably new for you as they are not widely known yet. All of the tools below either offer free versions or are entirely free.

5 Fake Facebook templates and pages for student projects April 16, 2011 by mrkaiser208 Facebook is the place that kids hang out after school. Heck, it’s the place many of them hang out during school. 17 Alternatives to Klout As we wrote about earlier this week, Klout has reworked its algorithms, and your scores have changed. Some have gone up, some down. Despite claiming more transparency with their algorithms, they are still mostly opaque and mysterious. As one of our readers commented, "Klout just pulled a Netflix, taking trust off the table." So while they tinker with their code, you might want to explore other alternatives that can help you measure your social media effectiveness. We have come up with 17 different services, some free, some fairly expensive. 16 Facebook Applications to Boost Popularity of Facebook Fan Page CHECK OUT: Quite a number of facebook apps are not working till date. Head over to 23+ Essential Facebook Page Applications to Improve Fans Engagement in 2012 for latest app suggestions. Do you know there are over 20 million people join as fans of Facebook Fan Pages daily?