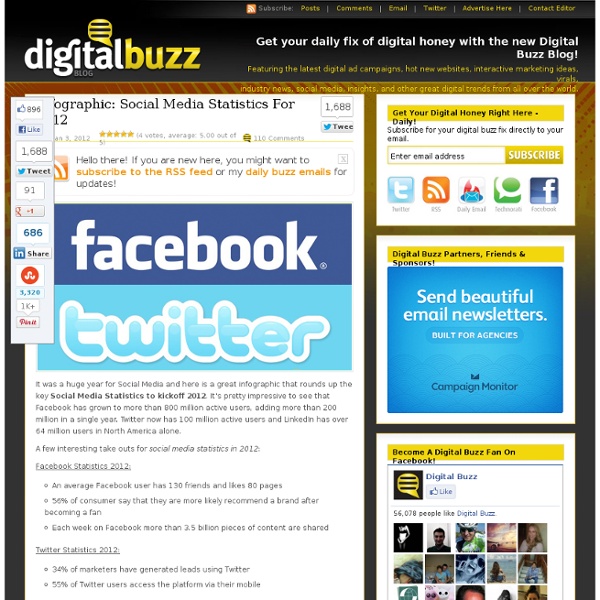 It was a huge year for Social Media and here is a great infographic that rounds up the key Social Media Statistics to kickoff 2012. It’s pretty impressive to see that Facebook has grown to more than 800 million active users, adding more than 200 million in a single year. Twitter now has 100 million active users and LinkedIn has over 64 million users in North America alone. A few interesting take outs for social media statistics in 2012: Facebook Statistics 2012: An average Facebook user has 130 friends and likes 80 pages56% of consumer say that they are more likely recommend a brand after becoming a fanEach week on Facebook more than 3.5 billion pieces of content are shared Twitter Statistics 2012: 34% of marketers have generated leads using Twitter55% of Twitter users access the platform via their mobile General Social Media Statistics 2012: Check out more social media statistics for 2012 below in the full infographic, via Mediabistro. Be Sociable, Share! Related:  Twitter

Social Media for Business Defined as the use of internet and mobile technology for social interaction, social media has become increasingly popular among consumers over the past 10 years. As the popularity of social media sites like Facebook and LinkedIn have continued to grown, most business owners can now agree that it’s a medium that can successfully help build brand and product awareness. The appeal of social media comes from the fact that it is virtually free for businesses to use. There is obviously value to embracing social media. Facebook This social networking giant has 161 million users in the U.S. alone. Here is just one way you can incorporate Facebook into your business plan—create a Facebook fan page. Twitter Twitter has been slower to grow but is starting to gain in popularity. One example of a successful Twitter campaign comes from the consumer-oriented computer company Dell. LinkedIn Social media isn’t just for personal networking. Myspace

Social Media Holiday Purchases  Here’s an interesting Christmas shopping themed infographic that shows the power of social recommendations around the holiday season. Mr. Youth, a word-of-mouth marketing firm, surveyed around 4,500 adults and found that social media has been a key driver of Christmas gift purchases this year. A few interesting take outs are: 66% of Black Friday purchases were a result of social media interactions36% of social media users trust brands that have a social media presence52% of users are willing to pay more for brands that they trust80% that received a response on a brand’s social channel went on to make a purchase Top 11 Social Media Presentations 2010 Presentations are a great way to consume information and learn about new topics. Unfortunately, we don't all have the time and money to spend traveling to conferences to see them in person. Fortunately, the web has helped solve this problem by making it easier to share and watch presentations . Slideshare has become a powerful resource for discovering new ideas. Social Media Marketing Presentations 1.The 25 Basic Styles of Blogging ... 2.Basics Of Social Media Roi by Olivier Blanchard 3. 4. 5. 6. 7. 7 Ways to Use Social Media to Build Stunning Business and Personal Brands by Jay Baer 8. 9. 10. 11. 8 Digital Trends That Will Change Everything by Josh Martin Have you seen other presentations that should be on this list?

• Twitter accounts with the most followers worldwide in October 2012 | Ranking Reading support This statistic presents a ranking of the most popular Twitter accounts as of March 2014, sorted by the highest numbers of followers. During that month, singer Katy Perry's account @katyperry had 51.83 million followers. In comparison, US President Barack Obama's account was followed by 41.85 million people. Celebrities and Twitter Founded in 2006, Twitter is an online social networking and microblogging service that allows users to post text-based status updates and messages of up to 140 characters in length. In order to establish authenticity of identity on Twitter, accounts of people from high-interest areas such as music, fashion, entertainment, politics, media, business or other areas as well as individuals at high risk of impersonation are verified by Twitter. Twitter provides a near-instant access channel to celebrities. Major sporting events and industry award shows such as the Grammy or Academy Awards generate lots of online buzz on Twitter.

How User-Generated Content Is Changing SEO Cathy Halligan is the senior vice president of sales and marketing for PowerReviews. Prior to joining PowerReviews, she was chief marketing officer and vice president of product management and multichannel integration at Walmart.com. Halligan also held executive positions at Williams-Sonoma, Gymboree and Lands' End. Google is at the social game again with the recent unveiling of Google+, a big bet for the company and an effort to show that it can keep up with Facebook in this increasingly important space. However, it’s important to recognize that the launch of Google+ is not just a run at Facebook — it’s a reflection of the increasing importance the company places on social signals in how it indexes, ranks and presents information to consumers. Google has long been the first choice of consumers who are looking for information online, and it has monetized its search offering well (32% revenue growth to $9 billion-plus in Q2). Consider this: The results: So what’s the bottom line?

How Students Use Technology [INFOGRAPHIC] It's clear that today's students rely heavily on electronic devices even when they're not incorporated in the classroom. In one survey of college students, 38% said they couldn't even go 10 minutes without switching on some sort of electronic device. But how students are using their devices, how technology is affecting their educational experience, and what effect it has on their well-being are questions that are harder to answer. In the infographic below, online higher education database Onlineeducation.net has summed up some of the existing research on these points.

10 Research Tools for Social Media Strategies Liana Evans | February 23, 2011 | 5 Comments inShare287 Before you start engaging in social media, you have to know where the conversations are going on, what are the trends, who are the influencers, and who are the evangelists. Before you decide to implement any tactic in social media, the first question you should ask is "Why?" Why should I have a Facebook page? Research is the foundation to any social media or integrated marketing strategy. Research however goes beyond just "keyword research" using the Google AdWords tool and discovering seasonal trends. Research tools are indispensible and can take many forms for different companies depending on resources, capabilities, and budgets. Buzz Monitoring Tools Google Alerts (free): You can use Google Alerts as a rudimentary buzz monitoring tool now that Google is including conversations in its index. Research Tools Google Trends (free): This is a free tool from Google that you can use to spot trends happening currently in the world.

Twitter Study Reveals the Secret to Getting More Followers After analyzing the Twitter profiles of 36 million users who have generated more than 28 billion tweets (that's 794 tweets per person in three years on average), Beevolve's social analytics research reveals user follower bases directly correlate with how much they tweet. A Twitter user who has written 1 to 1000 tweets has an average of 51 to 100 followers, whereas users who have tweeted more than 10,000 times tend to be followed by 1,001 to 5000 individuals. It's estimated that a person with more than 15,000 tweets has between 100,001 to 1 million followers. Beevolve's report, called "An Exhaustive Study of Twitter Users Around the World," takes a look at users' demographics, follower stats, gender preferences, favorite keywords and smartphone/app preferences. SEE ALSO: 15 Twitter Accounts Every Space Lover Should Follow It turns out the average Twitter user is an English-speaking 28-year-old woman with about 208 followers. What's the most surprising thing this study reveals?