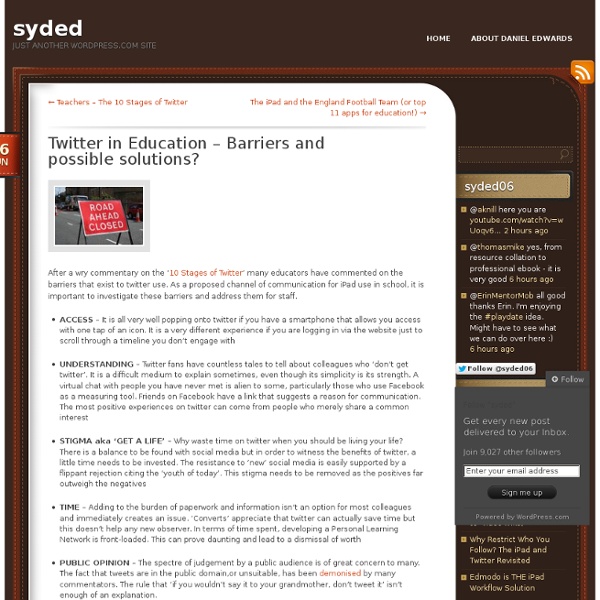 After a wry commentary on the ‘10 Stages of Twitter‘ many educators have commented on the barriers that exist to twitter use. As a proposed channel of communication for iPad use in school, it is important to investigate these barriers and address them for staff. ACCESS – It is all very well popping onto twitter if you have a smartphone that allows you access with one tap of an icon. It is a very different experience if you are logging in via the website just to scroll through a timeline you don’t engage withUNDERSTANDING – Twitter fans have countless tales to tell about colleagues who ‘don’t get twitter’. A number of solutions have been suggested to remove these barriers and are proving fruitful alongside our iPad trial: Allow time for twitter professional development with any presentation immediately followed up with individual trouble-shooting and supportCreate a ‘ring-fenced‘ twitter trial zone.

How Twitter is Reinventing Collaboration Among Educators In the three years that I’ve been building up Edutopia’s presence on social networks like Twitter, Facebook, and YouTube, I’ve noticed a significant shift in how our audience of education changemakers interact and collaborate. In particular, I’ve seen Twitter reinvent the way educators collaborate to create change in education. Twitter Transforms Educators Before the advent of Twitter, most educators I know had limited opportunities to collaborate with colleagues outside their building. Enter Twitter. Here are some of the specific ways educators are using Twitter to collaborate: Edcamps: Edcamps are “unconferences” for educators that are mostly promoted through Twitter and organized by people who’ve met on Twitter. Twitter chats: There are currently over 150 Twitter chats on education-related topics. Hashtags: Educators use a lot of hashtags. Profiles in Collaboration Results of Collaboration Educator Shelly Terrell reached out to Dabbs on Twitter three years ago. Your Turn

How To Write Tweets Longer Than 140 Characters Ever had a bit more to say but hit the 140 character limit on Twitter? Spent a few minutes trimming your tweet down to acceptable levels? Me too. While there’s still not an official way to write more than 140 characters (nor will there ever be, really), there is a little hack you should know about. It’s called Tall Tweets and is from Amit Agarwal , the same guy who brought you the other fun tool we just showcased called Sleeping Time (shows you when your Twitter friends sleep – very fun!) How Tall Tweets Works Tall Tweets is a simple tool that turns your long tweet into an image. There is another option to ‘Tweet As Text’ where the service will chop up your lengthy text and then tweet it out piece-by-piece. The only problems I see are that @mentions don’t work (obviously) in the ‘tall tweet’ because it’s an image. What Tall Tweets Look Like Below is a tweet that contains the full text of this post you just read!

How To Use Facebook to Build and Maintain a Customer Base If you have just started a new web business or you’d like to but don’t know how to get the word out about it, Facebook is your friend. By using Facebook you can find potential customers, keep them up-to-date about your business and maintain their loyalty. Here are the ways you can build and maintain a solid customer base for your new web business on Facebook. Create a Facebook Page for Your Business This has become a MUST for any web business. By creating a page, you can allow fans to “like” your page, which will give your business more visibility. Use Your Friends If you already have a personal Facebook account and a long list of friends and family members, you can advertise your new web business through them. Build Expectations Looking for a way to create excitement and buzz for your business? Keep Everything Up-to-Date Keeping your Facebook accounts updated is an important job of maintaining your new online business. The Author Pamelia can be contacted at pamelia.brown@gmail.com 255inShare

The Teacher’s Quick Guide To Educational Twitter Hashtags The Teacher’s Quick Guide To Educational Twitter Hashtags Added by Jeff Dunn on 2012-10-18 I heart Twitter. If you haven’t yet, follow @edudemic to keep up with what we’re doing, working on, and seeing (like last night’s tech event with GDGT in downtown Boston!). Twitter has become a massive hit in education and it’s too big to ignore. But that’s a very lengthy list. Want to download this graphic as a PDF? Category: Featured Tags: #edchat , guide , hashtags , infographic , resource , twitter , visualization You may also like How Teachers Are Hacking Their Own Digital Textbooks Added by Anthony DiLaura 5 days ago 17.23K Views 9 Comments 0 Likes A group of teachers have started to disrupt their own textbook options by starting up an iBooks Author Hackathon. 5 Free Apps For Classrooms With A Single iPad Added by Monica Burns 1 month ago 24.65K Views 1 Comments 0 Likes You don’t have to be in a 1:1 classroom to infuse technology. 30 Young Leaders Worth Following On Twitter 2 Comments Fresh Posts

10 Ways To Launch and Promote A Product Using Social Media Launching a product using social media provides multi-media rich global platforms that makes it easy for each social network community to share the message and let other people know about your brand. Promoting, marketing and launching any product globally was usually left to multi-nationals with big budgets and access to prime time TV and other expensive mass media and to be effective required multi-million dollar budgets. Here is a case study of Guy Kawasaki’s launch and promotion of his book ‘Enchantment The Art of Changing Hearts, Minds and Actions‘ and how he used a multi channel social media marketing strategy and tactics that can be applied to any product. This approach or a subset of his campaign can be applied by anyone with the right discipline and appropriate resources and ‘yes’ you will need a marketing budget but it will not need to be 6 or 7 figures. So how did he launch and promote his book using social media? Primary Goal: Cost: Approximately $2,700 Primary Goal Main Goal:

Teachers – The 10 Stages of Twitter Stage 1 Sign up to twitter following persuasion/pestering by colleagues. Follow Stephen Fry, a famous sportsman/popstar and a news channel. Read a few tweets, don’t understand what the fuss is about and mock anyone who uses twitter. Stage 2 Overhear colleagues chatting about twitter and a great article they found. Stage 3 Think about posting first tweet. Stage 4 Upon realising you have no followers ask colleagues how to get them? Stage 5 Have a mini twitter conversation with colleague, even retweet a couple of statements. Stage 6 Practise a couple of tweets that include @names and hashtags. Stage 7 Retweet any link you find interesting as people might read them. Stage 8 Thank colleagues for introducing you to twitter, impressed with the knowledge you have gleaned and your growing number of followers. Stage 9 Reflect that twitter is an incredibly positive place and everyone is full of praise. Stage 10 (the reason for this post) When seeking opinion from a range of people, ask PLN to respond.

16 Ways Businesses Are Using Twitter Vine Are you wondering how the new Twitter Vine (think ultra short videos) could work for your business? Vine is a new mobile app that allows you to capture life from your mobile device in short, six-second looping videos. You can share these short videos with your Twitter followers and Facebook friends. Think of it as Instagram, except with videos instead of pictures. In today’s post, I’ll show you some creative uses of Vine for business. Editor’s note: You can click on any video to pause it. #1: Engage Your Followers in Conversation Start a conversation with your followers using a Vine video. Simon & Schuster does this by not just asking what followers will be reading this weekend—they give them visual cues on what they could be reading. It could spark any reader to go to their local bookstore or order a new title online. It’s a long weekend! #2: Highlight Your Brand Advocates What’s even better than advertising one of your products on a Vine video? #3: Display Your Work for a Client 1. That’s it!

Is Content Marketing the Hot New Trend? - Infographic It was in 2008 that I realised the power of creating and marketing unique content to pull people to your website and blog. That was one of the primary reasons I started jeffbullas.com. I discovered this when I stumbled upon Hubspot, a company that was one of the early innovators of content marketing. Their marketing was refreshing change to “old school” marketing and was based upon creating attention through attraction with blog articles and free ebooks. It was the dawn of “pull marketing” or “inbound marketing” rather than push strategies such as telemarketing and direct mail. Fast forward to 2012 and it appears that there is a growing groundswell of activity and interest in content marketing is racheting up. This momentum is not only for B2B but B2C is starting to adopt this marketing philosophy and Coca Cola has created a brand new marketing strategy based upon this emerging trend. Other companies such as American Express are also embracing this trend. More Reading 416inShare

» “Tweaching” with Twitter Yes. That’s right. It’s not a misspelling. “Tweaching” is on the rise. A term coined by our very own Brian Salerno at QU Online, “tweaching” refers to the use of Twitter for instruction in both online and on ground settings. According to the Faculty Focus Report (2009) on Twitter in Higher Education, up to 71.8% of college faculty expect that their use of Twitter will increase in the coming school year. Twitter , a free microblogging service that allows for text-based messages of 140 characters or less, can be categorized as both an asynchronous and synchronous communication tool. opinions or reactions posing a question sharing a resource polling real time news developments conference back channeling networking safety alerts Tom Barrett, 2008 As educators, we all strive to create teachable moments for our student population.

Cory Booker, Twitter Visionary AUSTIN, Tex. — Cory Booker — the mayor of Newark and a virtual Twitter superhero for his chronicle of the city — made the trip to the annual South by Southwest conference here on Sunday to impart his tips and perspective on why Twitter is a valuable tool for governing and civic engagement. Mr. Booker (@CoryBooker on Twitter) credited a phone call from the actor Ashton Kutcher (@aplusk on Twitter) for turning him on to the reach of social media — “I thought I was getting ‘Punk’d,’ ” he joked, referring to the MTV hidden-camera show produced by Mr. Kutcher — and said he agreed to try the service for three months. After a month, Mr. “The future of government has to be getting to 2.0,” Mr. Mr. Mr. His Twitter good deeds have even prompted a gently mocking hashtag — #CoryBookerStories. To hear Mr. Social media, he said, can also empower citizens to take more of an active role in government: “Our voices are really more amplified.”

This is How to Use Twitter as a Curation Tool Twitter bookmarks way outnumber all the other bookmarks I have in my Chrome browser. Whenever I come across a video, a guide, a tutorial, a graphic, or a well written article on Twitter I automatically add it to this list of bookmarks and from time to time I refer to these bookmarks to select for the content I want to share with you here as is the case with the awesome graphic below. I am also working on a term paper for my MA Ed here in the Mount University. This paper is about the use of twitter as a professional development tool for teachers and which I will share with you in PDF format once it is submitted . Today I am sharing with you this great graphic from Langwitches. check it out below and share with use what you think of it.Enjoy