The Archivist By Mix Online 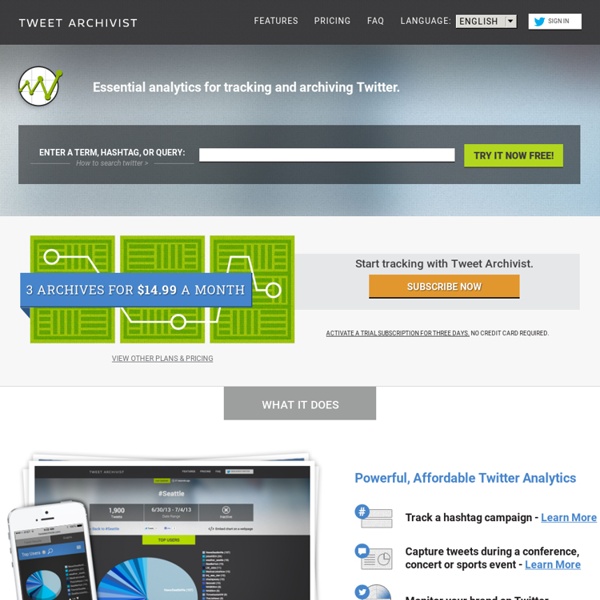 What are the copyright issues in lending Kindles and ebooks to our students? > JISC Legal > ManageContent One of the legal rights a copyright holder has is the right to control the renting or lending of a work to the public. Copyright in a work is not infringed by lending by an educational establishment, as provided for by s.36(A) of the Copyright, Designs and Patents Act 1988. However, a restriction on lending might be contained in the content purchase agreement, and make any lending a breach of contract (even though it is not an infringement of copyright). A copyright holder also has the right to control the copying and communicating of the work to the public.

Top 5 Android Apps To Tweet Longer Than 140 Characters As we all know, popular micro-blogging phenomenon, Twitter, allows users post tweets up to just 140 characters long. If you wish to post a message longer than that, you’ll need to resort to other web apps, such as TwitLonger, TweetExtend, RichTweet, TMI.ME, JumboTweet and EZTweets etc. Just like the Twitter web service itself, its official Android client doesn’t let users post a tweet longer than the conventional 140-character mark. Vital Twitter Tools for Managing Twitter Better Lilach Lilach is the founder and driving force behind Socialable, and highly regarded on the world speaker circuit. Forbes and Number 10 Downing Street have even been graced by her presence! In a nutshell, she’s a hugely connected and highly influential serial entrepreneur – the embodiment of Digitelligence.Listed in Forbes as one of the top 20 women social media power influencers and likewise as one of the top social media power influencers, she is one of the most dynamic personalities in the social media market, she actively leverages ethical online marketing for her clients and for Socialable. After launching her first business within three years of becoming a mother, her financial success was recognised by being a finalist at the Best MumPreneur of the Year Awards, presented at 10 Downing Street.

Twitter's Ranking of the most recommended verified tweeps Search and filter options allowing you to find people to follow depending on location, influence, number of followers, how active users are on Twitter and many more! Find the most beneficial people to target so that you can grow and increase the quality of your Twitter community. Find out your best time to tweet, discover the interests of a custom sample of users and endless extra features! To find out more about our product Creating Lists on Twitter Creating Lists on Twitter Lists are a great way to help you organise the people you are following on Twitter into groups. This might be defined by people, interests, topics. UK’s open access full-text search engine to aid research Open access research is now more accessible as Jisc has developed a new search engine to help academics, students and the general public navigate papers held in the UK’s open access repositories. Jisc has funded the Open University’s Knowledge Media Institute (KMi) to create an innovative new search facility which searches not just the abstract but the full text of the article. When researchers use current systems like Google Scholar to search academic papers they can find themselves denied access to the full article, particularly when subscription fees are required. They also typically have to search across a number of open access repositories or use searches that harvest data from different sources. But now, using the COnnecting REpositories tool or CORE, people can search the full text of items held in 142 approved Open Access repositories.

8 Best Twitter Statistics and Analytics Tools Almost everyone knows the power of twitter now but very few know how to get more out of it, means to get twitter stats and analytics. To use Twitter fully and become successful, you must check statistics of your twitter account and analyze it. But, the basic Twitter service does not provide full and advanced stats, you can get those only by using tools developed by others. Here is the list of 8 useful twitter statistics and analytics tools. Twitter Stats and Analytics Tools Social Networking: The Top 10 Social Networks for Creative People Pin It Four years ago I wrote a guide to the Top 10 Social Networks for Creative People that turned out to be one of the most popular things I’ve ever published here on Lateral Action. But four years is a long time in social media. Empires rise and fall, old networks fade away and new ones arrive on the scene. So it’s time for an updated guide – to the most inspiring, useful and addictive social networks for creative people in 2012. As before, I begin by looking at WHY networking is critical to your success as a creative professional.

17 Ways to Visualize the Twitter Universe I just created a new Twitter account, and it got me to thinking about all the data visualization I've seen for Twitter tweets. I felt like I'd seen a lot, and it turns out there are quite a few. Here they are grouped into four categories - network diagrams, maps, analytics, and abstract. Network Diagrams Being socially devoted to your customer care increases ROI I had to come back to Econsultancy and write about this, as 1 year ago I wrote the article: Companies respond to just 5% of question on social media. Get it? Only 5% of all questions got answered. REALLY crazy!