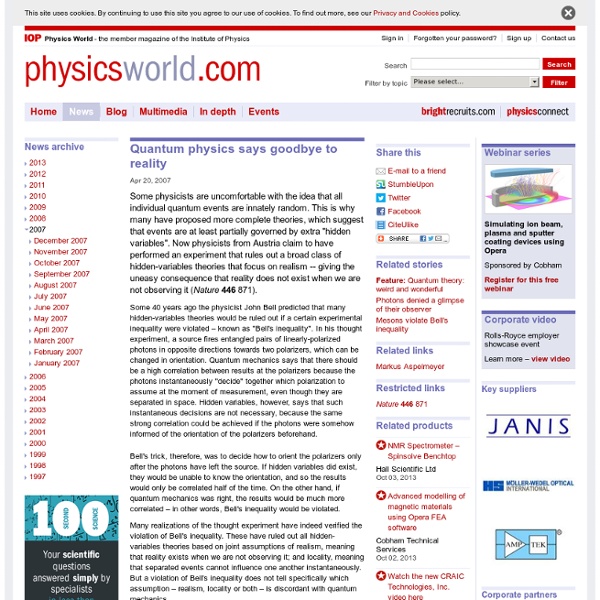 Some physicists are uncomfortable with the idea that all individual quantum events are innately random. This is why many have proposed more complete theories, which suggest that events are at least partially governed by extra "hidden variables". Now physicists from Austria claim to have performed an experiment that rules out a broad class of hidden-variables theories that focus on realism -- giving the uneasy consequence that reality does not exist when we are not observing it (Nature 446 871). Some 40 years ago the physicist John Bell predicted that many hidden-variables theories would be ruled out if a certain experimental inequality were violated – known as "Bell's inequality". In his thought experiment, a source fires entangled pairs of linearly-polarized photons in opposite directions towards two polarizers, which can be changed in orientation. Bell's trick, therefore, was to decide how to orient the polarizers only after the photons have left the source.

Quantum Mechanics and Reality, by Thomas J McFarlane © Thomas J. McFarlane 1995www.integralscience.org Most traditional [spiritual] paths were developed in prescientific cultures. Alice in Quantumland: A Charming Illustrated Allegory of Quantum Mechanics by a CERN Physicist by Maria Popova Down the rabbit hole of antimatter, or how to believe six impossible things about gender stereotypes before breakfast. As a lover of science and of all things Alice in Wonderland, imagine my delight at discovering Alice in Quantumland: An Allegory of Quantum Physics (public library) — an imaginative and unusual 1995 quantum primer by particle physicist Robert Gilmore, who has under his belt experience at Stanford and CERN. Besides the clever concept, two things make the book especially remarkable: It flies in the face of gender stereotypes with a female protagonist who sets out to make sense of some of the most intense science of all time, and it features Gilmore’s own magnificent illustrations for a perfect intersection of art and science, true to recent research indicating that history’s most successful scientists also dabbled in the arts. Gilmore writes in the preface: In the first half of the twentieth century, our understanding in the Universe was turned upside down.

Old Earth creationism Old Earth creationism is an umbrella term for a number of types of creationism, including gap creationism, progressive creationism, and evolutionary creationism.[1] Old Earth creationism is typically more compatible with mainstream scientific thought on the issues of physics, chemistry, geology and the age of the Earth, in comparison to young Earth creationism.[2] Types of old Earth creationism[edit] Gap creationism[edit] Gap creationism states that life was immediately and recently created on a pre-existing old Earth. One variant rests on a rendering of Genesis 1:1-2 as: The Search For The History Of The Universe's Light Emission The light emitted from all objects in the Universe during its entire history - stars, galaxies, quasars etc. forms a diffuse sea of photons that permeates intergalactic space, referred to as "diffuse extragalactic background light" (EBL). Scientists have long tried to measure this fossil record of the luminous activity in the Universe in their quest to decipher the history and evolution of the Cosmos, but its direct determination from the diffuse glow of the night sky is very difficult and uncertain. Very high energy (VHE) gamma-rays, some 100,000,000,000 times more energetic than normal light, offer an alternative way to probe this background light, and UK researchers from Durham University in collaboration with international partners used the High Energy Stereoscopic System (HESS) gamma-ray telescopes in the Khomas Highlands of Namibia to observe several quasars (the most luminous VHE gamma-ray sources known) with this goal in mind.

Golden Ratio Discovered in the Quantum World By Rakefet TavorEpoch Times Staff Created: January 19, 2010 Last Updated: June 17, 2012 PICTURING THE GOLDEN RATIO: Scientists fired neutrons at cobalt niobate particles, finding resonant notes with the golden ratio. (Tennant/HZB) Young Earth creationism Young Earth Creationism (YEC) is the religious belief[1] that the Universe, Earth and all life on Earth were created by direct acts of the Abrahamic God during a relatively short period, between 5,700 and 10,000 years ago.[2] Its primary adherents are those Christians and Jews[3] who, using a literal interpretation of the Genesis creation narrative as a basis, believe that God created the Earth in six 24-hour days.[4][5] Young Earth Creationists differ from other creationists in that they believe in a strict-literal interpretation of the Bible regarding the age of the Earth. This contrasts with Old Earth Creationists, who believe that the Book of Genesis may be interpreted metaphorically and who accept the scientifically determined age of Earth and the universe.[6] Since the mid-20th century, young Earth Creationists starting with Henry M.

Dark Matter: The Larger Invisible Universe Normal matter—you, me, oatmeal, mountains, oceans, moons, planets, galaxies—make up about twenty-percent of the universe; the other eighty-percent is dark matter—star-stuff we cannot see or detect…yet. Why are scientists so certain this enigmatic matter exists? Because the evidence permeates the universe, first observed by Fritz Zwicky, when he measured the motions of galaxies and calculated that there wasn’t enough visible matter to affect galaxies to extent they were being pulled around.WWWFirst, there isn’t enough gravitational force within galaxies to bind and hold them in their current formation; then there is an invisible element that keeps them rotating faster than scientists would expect, clusters of galaxies bend and distort light more than they should, and supercomputer simulations exhibit that clouds of ordinary matter in the early universe did not have enough gravity to create the tight formations of galaxies we now see.

Quantum "spooky action at a distance" travels at least 10,000 times faster than light Quantum entanglement, one of the odder aspects of quantum theory, links the properties of particles even when they are separated by large distances. When a property of one of a pair of entangled particles is measured, the other "immediately" settles down into a state compatible with that measurement. So how fast is "immediately"? According to research by Prof. Creation of man from clay Fashioning a man out of clay According to Genesis 2:7 "And the Lord God formed man of the dust of the ground, and breathed into his nostrils the breath of life; and man became a living soul."According to the Qur'an[23:12–15], God created man from clay.According to greek mythology (see Hesiod's poem Theogeny), Prometheus created man from clay, while Athena breathed life into them.According to Chinese mythology (see Chu Ci and Imperial Readings of the Taiping Era), Nüwa molded figures from the yellow earth, giving them life and the ability to bear children.According to Egyptian mythology the god Khnum creates human children from clay before placing them into their mother's womb. انا خلقنا الانسان من صلصال من حمإ مسنون reference from sour at alhijer holy Quran

The Theory of Everything The above equation was written by Dr. Michio Kaku, theoretical physicist, who gradu­ated first in his physics class at Harvard, and, when he was in high school built a 2.3 million electron volt atom-smasher in his parents garage. It is an equation for String Field Theory—a theory that may unite The Theory of Relativity with Quantum Theory, into a uni­fied theory called The Theory of Everything. Theoretical physicists are those scientists who work in that twilight zone cutting edge realm be­tween reality and science fiction. For thirty years Einstein sought a unified theory of physics that would integrate all the forces of nature into a single beautiful tapestry. Even he failed.