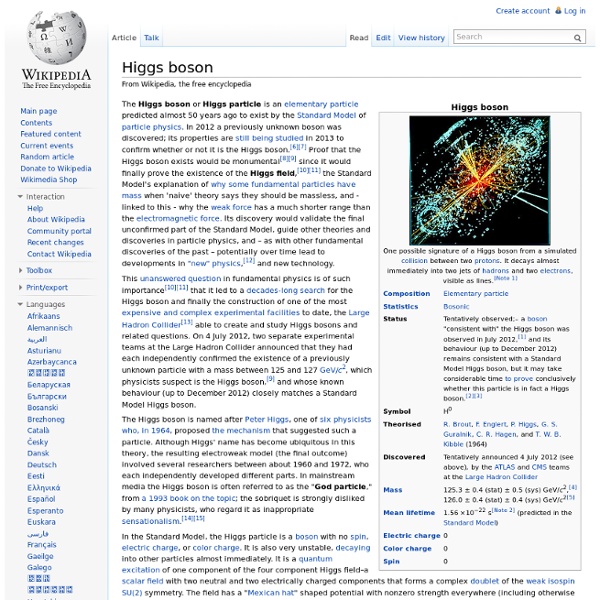 The Higgs boson is named after Peter Higgs, one of six physicists who, in 1964, proposed the mechanism that suggested the existence of such a particle. Although Higgs's name has come to be associated with this theory, several researchers between about 1960 and 1972 each independently developed different parts of it. In mainstream media the Higgs boson has often been called the "God particle", from a 1993 book on the topic; the nickname is strongly disliked by many physicists, including Higgs, who regard it as inappropriate sensationalism.[17][18] In 2013 two of the original researchers, Peter Higgs and François Englert, were awarded the Nobel Prize in Physics for their work and prediction[19] (Englert's co-researcher Robert Brout had died in 2011). A non-technical summary[edit] "Higgs" terminology[edit] Overview[edit] If this field did exist, this would be a monumental discovery for science and human knowledge, and is expected to open doorways to new knowledge in many fields. History[edit]

The Wicker Man (1973 Edit Storyline Sgt. Time dilation Time dilation explains why two working clocks will report different times after different accelerations. For example, ISS astronauts return from missions having aged slightly less than they would have been if they had remained on Earth, and GPS satellites work because they adjust for similar bending of spacetime to coordinate with systems on Earth.[1] An accurate clock at rest with respect to one observer may be measured to tick at a different rate when compared to a second observer's own equally accurate clocks. This effect arises neither from technical aspects of the clocks nor from the fact that signals need time to propagate, but from the nature of spacetime itself. Graviton Theory[edit] The three other known forces of nature are mediated by elementary particles: electromagnetism by the photon, the strong interaction by the gluons, and the weak interaction by the W and Z bosons. The hypothesis is that the gravitational interaction is likewise mediated by an – as yet undiscovered – elementary particle, dubbed as the graviton. In the classical limit, the theory would reduce to general relativity and conform to Newton's law of gravitation in the weak-field limit.[6][7][8] Gravitons and renormalization[edit] When describing graviton interactions, the classical theory (i.e., the tree diagrams) and semiclassical corrections (one-loop diagrams) behave normally, but Feynman diagrams with two (or more) loops lead to ultraviolet divergences; that is, infinite results that cannot be removed because the quantized general relativity is not renormalizable, unlike quantum electrodynamics.

Complex analysis Murray R. Spiegel described complex analysis as "one of the most beautiful as well as useful branches of Mathematics". Complex analysis is particularly concerned with the analytic functions of complex variables (or, more generally, meromorphic functions). Because the separate real and imaginary parts of any analytic function must satisfy Laplace's equation, complex analysis is widely applicable to two-dimensional problems in physics. History[edit] Quantum gravity Quantum gravity (QG) is a field of theoretical physics that seeks to describe the force of gravity according to the principles of quantum mechanics. Although a quantum theory of gravity is needed in order to reconcile general relativity with the principles of quantum mechanics, difficulties arise when one attempts to apply the usual prescriptions of quantum field theory to the force of gravity.[3] From a technical point of view, the problem is that the theory one gets in this way is not renormalizable and therefore cannot be used to make meaningful physical predictions. As a result, theorists have taken up more radical approaches to the problem of quantum gravity, the most popular approaches being string theory and loop quantum gravity.[4] Strictly speaking, the aim of quantum gravity is only to describe the quantum behavior of the gravitational field and should not be confused with the objective of unifying all fundamental interactions into a single mathematical framework.

HomeschoolScientist Upload TheHomeschoolScientist.com Subscription preferences Loading... Working... HomeschoolScientist Spacetime In non-relativistic classical mechanics, the use of Euclidean space instead of spacetime is appropriate, as time is treated as universal and constant, being independent of the state of motion of an observer.[disambiguation needed] In relativistic contexts, time cannot be separated from the three dimensions of space, because the observed rate at which time passes for an object depends on the object's velocity relative to the observer and also on the strength of gravitational fields, which can slow the passage of time for an object as seen by an observer outside the field. Until the beginning of the 20th century, time was believed to be independent of motion, progressing at a fixed rate in all reference frames; however, later experiments revealed that time slows at higher speeds of the reference frame relative to another reference frame. Such slowing, called time dilation, is explained in special relativity theory. Spacetime in literature[edit] Mathematical concept[edit]

Gluon Gluons /ˈɡluːɒnz/ are elementary particles that act as the exchange particles (or gauge bosons) for the strong force between quarks, analogous to the exchange of photons in the electromagnetic force between two charged particles.[6] In technical terms, gluons are vector gauge bosons that mediate strong interactions of quarks in quantum chromodynamics (QCD). Gluons themselves carry the color charge of the strong interaction. This is unlike the photon, which mediates the electromagnetic interaction but lacks an electric charge. Gluons therefore participate in the strong interaction in addition to mediating it, making QCD significantly harder to analyze than QED (quantum electrodynamics). Properties[edit]

Boson In quantum mechanics, a boson (/ˈboʊsɒn/,[1] /ˈboʊzɒn/[2]) is a particle that follows Bose–Einstein statistics. Bosons make up one of the two classes of particles, the other being fermions.[3] The name boson was coined by Paul Dirac[4] to commemorate the contribution of the Indian physicist Satyendra Nath Bose[5][6] in developing, with Einstein, Bose–Einstein statistics—which theorizes the characteristics of elementary particles.[7] Examples of bosons include fundamental particles such as photons, gluons, and W and Z bosons (the four force-carrying gauge bosons of the Standard Model), the recently discovered Higgs boson, and the hypothetical graviton of quantum gravity; composite particles (e.g. mesons and stable nuclei of even mass number such as deuterium (with one proton and one neutron, mass number = 2), helium-4, or lead-208[Note 1]); and some quasiparticles (e.g. Cooper pairs, plasmons, and phonons).[8]:130