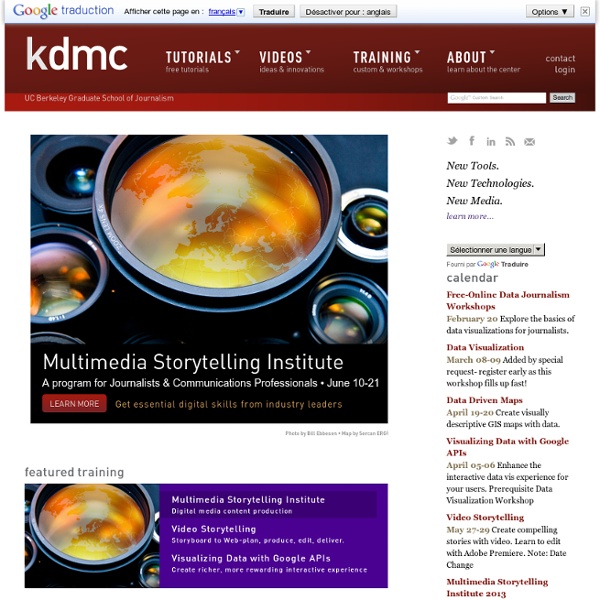 10 tools that can help data journalists do better work, be more efficient It’s hard to be equally good at all of the tasks that fall under data journalism. To make matters worse (or better, really), data journalists are discovering and applying new methods and tools all the time. As a beginning data journalist, you’ll want to develop a sense of the tools others are using to do the work you admire. You won’t be able to learn them all at once, and you shouldn’t try. You should, however, develop a sort of ambient awareness of the tools in use (something like the knowledge Facebook gives you about the lives of your high-school classmates).

The Best Data Mining Tools You Can Use for Free in Your Company Data mining or “Knowledge Discovery in Databases” is the process of discovering patterns in large data sets with artificial intelligence, machine learning, statistics, and database systems. The overall goal of a data mining process is to extract information from a data set and transform it into an understandable structure for further use. Here is a simple but fascinating example of how data mining helped dissipate wrong assumptions and conclusions about girls, and take action with tremendous social impact. For long time, the high rate of dropout of girls in schools in developing countries were explained with sociological and cultural hypothesis: girls are not encouraged by indigenous societies, parents treat girls differently, girls are pushed to get married earlier or loaded with much more work than boys.

Infographic Designers' Sketchbooks by Steven Heller and Rick Landers reveals ... Copyright Tim Hucklesby Infographics are a staple of modern media. At their best, they’re elegant, streamlined visual capsules of information that help us process complex data at a glance. In Infographic Designers' Sketchbooks by Steven Heller and Rick Landers, out in October, more than 50 leading graphic designers and illustrators from around the world share their creative processes behind the art and science of data visualization. Using graphic shorthand to convey complex information has been used in magazines and newspapers since the 19th century, Heller writes, but today “a greater number of platforms and media outlets means it is incumbent on designers, who a decade ago would never have thought of themselves as ‘information architects,’ to become makers of some form of information visualization.” The book reveals various designers’ methods for developing and fleshing out ideas, from sketching drawings and doodles to digital mock-ups.

50+ (Mostly) Free Excel Add-Ins For Any Task There is no doubt about it – Excel is one powerful tool. However, it has does have its limitations. That is where add-ins come in to play. Jeff's Search Engine Caffè: Java Open Source NLP and Text Mining tools See my related post on Open-Source Search Engine Libraries. Here are some of the open source NLP and machine learning tools for text mining, information extraction, text classification, clustering, approximate string matching, language parsing and tagging, and more. I've tried to roughly group the tools. However, the categories are quite loose and many of the tools fit into multiple categories. Machine learning and data miningWeka - is a collection of machine learning algorithms for data mining. It is one of the most popular text classification frameworks.

Guardian launches open-source data journalism tool Collaborative data journalism platform Swarmize has launched today to offer editors and journalists better tools for the use of data, including real-time visualisation. Swarmize, now in alpha, won funding through the Knight News Challenge in June, and has been built at the Guardian over the last four months. "The Guardian and lots of other news organisations like to use Google Docs for collecting data," said Matt McAlister, the Guardian's general manager of new digital businesses. I'm hopeful that we'll start to see better data journalism because the tools are moving alongMatt McAlister, the Guardian "It's free, it's pretty easy to use, however it does have a lot of shortfalls," McAlister told Journalism.co.uk.

20+ Free Press Release Distribution Sites Following up on the advertising toolbox, you also need to let the media (oh if only there was a site about web 2.0 and social networking where you could get covered...) know about your new venture. We've gathered 20+ sites that will help you with getting your press release out in the world for free. And don't forget to check out our post where you can suggest future toolbox topics! 24-7PressRelease.com - Free release distribution with ad-support

5 Creative Uses for Crowdsourcing When Jeff Howe coined the term “crowdsourcing” in a 2006 Wired article his examples were mainly “labor markets for specialized talents,” like iStockphoto, iFilm, and InnoCentive. But the business model of outsourcing to the crowd has grown (as has Howe’s article — he published a book on the topic in 2008). As open-source software developers learned long ago, asking a pool of people to create something can be faster, cheaper, and more accurate than putting a project in the hands of individuals. These five start-ups are doing just that by using crowdsourcing in creative ways.

30 must-see infographic galleries from newspapers After last month’s article highlighting data viz galleries we recommend everyone to follow, we return to this subject not only with more amazing sources of visual inspiration, but in many ways, with the true place where you’ll find the best infographics. And that’s because, before there was an Internet (or television, or radio, for that matter), infographics and maps were already present in several newspapers and magazines – something we are reminded of every Monday, as you saw earlier today. More importantly, journalistic infographics are bound (or should be, at least) to the same principles any journalistic piece is, namely in terms of the accuracy and relevance of the message/data presented to the readers.