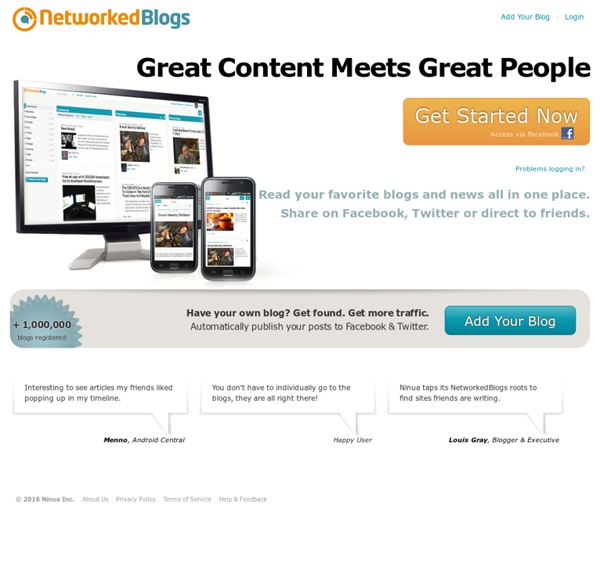 Get Started Now Access via Facebook Problems logging in? Are you using AdBlock, Facebook Disconnect, or another browser extension that blocks Facebook Connect? Try disabling it. This is likely the reason, especially if you don't see a "login" button. Check if you have blocked NetworkedBlogs on Facebook

Hyperlocal Voices In our Hyperlocal Voices series we speak to hyperlocal publishers about their journey as they seek to build a successful hyperlocal offer. From time to time we also check in again on some of the more established players to see what’s changed and how their operation is evolving. One such example is Brixton Blog in South West London. Originally established by Zoe Jewell in 2010, the site has evolved considerably since, launching the Brixton Bugle newspaper in July 2012 (10,000 copies of which are distributed each month) and working with The Carnegie UK Trust as part of their Neighbourhood News initiative by providing structured work placements for local trainees. Products We’re so intent on helping you get the most out of your social media that we’ve not only searched the world to identify the best tools and technology, but invented some of our own. Take our new Fan Reviews App, for instance. It does more than just automate customer reviews. It monetizes your social media by turning those reviews into business referrals.

International Statistics By Country Library Links Quick Links Quick Links Contact Lynne Rudasill Global Studies Librarian 303 International Studies Building MC-402 910 South Fifth Street Champaign, Illinois, 61820, USA (217) 265-6879 20 Must-See herramientas de enseñanza que vienen a su salón de clases Muy Pronto It’s hard to find a field that hasn’t been radically changed by technology, and education is no exception. Few classrooms these days operate without digital tools, gadgets, or applications that have made it easier for teachers to track student progress and tailor lessons to student needs and interests. While the tools of today are great, there are even more great technological teaching tools and practices on the horizon, many of which are just starting to be adopted in the classroom or are just making it out of the developmental stages.

Bringing Hyper-Local, Citizen-Driven News to South Africa Is hyper-local journalism interesting enough to engage its own audience? And is the prospect of being more “in the know,” and more connected and more involved in one’s community, attractive enough to inspire people to take the time out to do citizen journalism? The old adage that “all news is local” does hold a great deal of truth. News can be locally generated or outside news can be made local. The implications of any big news story – like H1N1 virus, a.k.a. swine flu – can almost always be localized to create stories about how this impacts on you, where you are right now. You might want to know about local stocks of anti-virals, and you would certainly be interested if the hospital near you started treating cases.

Downloads Current Stable Version The current stable release of GIMP is 2.8.18 (2016-07-14). We think your OS is Ubuntu. Show downloads for GNU/Linux | OS X | Microsoft Windows | All GIMP for Unix-like systems It's very likely your Unix-like system such as a GNU/Linux distribution already comes with a GIMP package. Palestine: New discussion platform for Nablus citizens The portal went online late last year, initially with its own Facebook page and since January as a wordpress-based website. Dooz is a multimedia news and exchange platform focusing exclusively on local topics; it's also unique given that Palestinian media mainly focus on major international issues. "We report on topics that directly affect people, on topics that literally happen on their doorsteps," says Dooz editor Majdoleen Hassouna. "Citizens can also use the platform to voice their concerns." Majdoleen Hassouna is one of three editors in charge in the young Dooz team. Dooz is being supported by DW Akademie and is part of a larger project by the German development organization GIZ.

Community Media Association If you’re inspired to start your own community radio station in your area, it can seem like a daunting prospect. The CMA is here to assist organisations of all sizes across the UK in providing community media services. We’ve brought together resources and information to help you take those first steps towards your new station. Frequency availability If you’re applying for a community radio licence in Ofcom’s third round over the next few years, there are a number of issues you need to be aware of around FM frequency availability. Because of the success of the first two rounds of licensing, Ofcom has made it clear Read more +